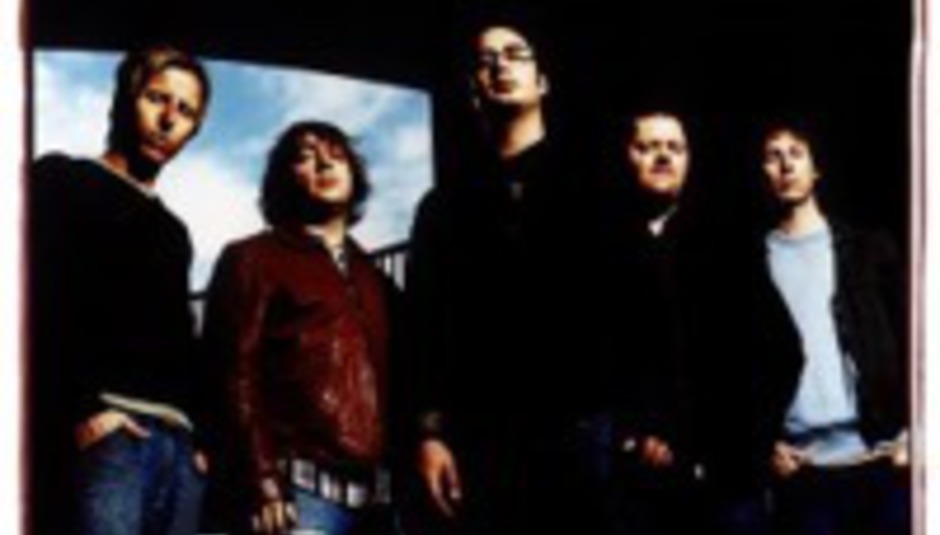 Hundred Reasons: not out

Hundred Reasons: not out

In a living nightmare before Christmas, DiS found a rather inebriated Raz sitting next to Hundred Reasons' guitarist and producer, Larry Hibbitt in one of the grottiest of London's watering holes. Luckily, that was not where this interview took place. Had it been, there would be nothing beyond this paragraph bar some random hiccups and gurgles and probably the sound of furniture colliding with Raz. Instead, we caught up with Larry during a break from rehearsal with the band as they prepared for the first video shoot for their forthcoming single, title track 'Kill Your Own'. Apparently involving "lots of kids and blood red paint", it's going to be all over your telly shortly.

Much has been said about Hundred Reasons' early rise to fame, recording a #6 chart position with their gold-selling debut album in 2002, Ideas Above Our Station, and their subsequent fall from grace but despite that the band are doing exactly what they've always wanted to do. "When we got dropped, we had a year where we were unsigned and we made enough money that meant that we could still afford to just rehearse for that year. I haven't worked since just before we recorded the first album. None of us have had to go back to doing shitty office jobs or anything." Larry adds, "It is my aim in life to avoid ever getting a job," a philosophy that can rightly be applied to many, many people.

It is a welcome return from the Surrey rockers as they were unceremoniously dropped from Sony Columbia in 2004. The new year sees them back in business at Britain's largest independent label, V2 - home to Blood Brothers, the now seemingly defunct Icarus Line and Raghav to name but a few. The label was carefully chosen and the decision largely came down to the personnel involved that they would be dealing with as Larry explains, "It's the complete opposite to Columbia in many ways. You can go in and actually have conversations with people, which is really refreshing."

A major personal regret for Larry was the release and apparent failure of their second album, Shatterproof Is Not A Challenge. "There were a lot of things that were wrong with that record. A lot of it was to do with the fact that we had absolutely no working relationship with the label by the time it came out. There was loads of pressure to get Shatterproof... out and get the ball rolling again. They just wanted a record - any record. It just got put out and forgotten about." Despite the manner in which it was fashioned and released, the record nevertheless did very well: "It still sold 65,000 but nobody quite seems to realise that."

A crucial part of Hundred Reasons' career so far has been their incredible work ethic and touring schedule to date. Never baulking at hard work, the quintet thought nothing of setting off on 30-date tours across the UK and the same is still true. With 18 dates in February and April, sandwiching a European tour and preceding a tour of America the boys are going to be busy bunnies this spring. Larry is pleased about the possible effects that the new label is having, "We're leapfrogging around the world. Thatï¿½s the good thing about V2, they're going to push us abroad. They looked at our sales figures for Europe at Sony and the guy at V2 just laughed. They're gonna send us to plenty of different countries. Why the hell wouldn't you? The whole point of this is to play as many different places and go and do new stuff."

One notable point about the UK tour in particular is the size of the venues that they are playing. It would be obvious to point out that the 1000-capacity venues they were playing during their tour in spring of 2004 are well beyond their capabilities now but that's not news to them. "We know that we've been away for a while and people do have short memories. The first tour's before the record's out and we want to get back into touring and playing our new stuff and getting people excited about it - not trying to fill the larger rooms. Not having to worry about that, we can just go out and play."

None of the band has any qualms about going on such an extensive touring schedule and Larry is rather enthusiastic about it, claiming that it's just about "getting in the van." And the rest! He is also realistic about what they have to do now and to whom they will be playing: "It's all about the people that have been with us for five years. We're worrying more about our core fanbase and the people that are still in touch with us - the rest will come and go but they're the ones we gotta look after." With admirable courage and intent Larry continues to explain their simple plan, "We want to start again. We're going to build it back up again the way that we're comfortable doing it." Let's just hope it is as effective as it was before.

Their UK appearances fall either side of the album release of Kill Your Own on 20th March. Larry explains some of the thoughts and themes that run through it: "It's quite an angry record. There are quite a few twisted moments and Colin's lyrics are a lot darker than before. At first the name seemed weird but after a while it just sort of made sense. It was the one that we just kept coming back to. It's a song about purposefully being a cunt to the people that you really love. It's when you really fuck people over, even when they're some of your closest mates."

Inimitably styled frontman Colin Doran has kept himself busy over the past couple of years, making a cameo appearance in the lauded underground metal collective, This Is Menace , as well as fronting The Lucky Nine. Both of those bands have a second album in the pipeline despite the members being involved in other projects, Doran far from the exception to that rule, but this is not a problem at all. "It's actually better for the band because if people are off somewhere else, being creative then they'll bring some of that back and the songwriting that we do together will benefit." Indeed, the benefits to Hundred Reasons have been plentiful as Larry comments, "It's made Colin a much better singer. The performances he's put down on this record are a lot better than any of the singing on either of the last records because he's been keeping busy and is recording a lot and is working with lots of other people with different ideas. He's really coming into his own."

Larry produced Kill Your Own and that high level of involvement where you are writing, recording and mastering a full album is difficult at best. Larry has definitely managed to handle it all and the fact he seemed so eager to tour the record now is a good sign of things to come. "It's possibly the most stressful thing I've ever done in my life and I think I was talked into it, really. Everyone in the band was just saying they just wouldnï¿½t be comfortable with anyone else. I am happy with it now that Iï¿½ve had a bit of distance from it. When we finished recording it I didn't really listen to it for a couple of weeks because I'd had so much of it for three months. I listened to it again and thought we did a really good job. I'm really proud of it."

Despite it appearing that some bad experiences have come into play while writing the record, it was not overtly evident on the first listen to the record. The familiar Hundred Reasons sound is still very much the order of the day with soaring choruses and jagged rock anthems laying the basis of many a track on the album. While there is no notable musical progression on show, a development in character is quite doubtless from the harsher lyrics and stronger delivery. Kill Your Own is British rock just the way this band brought it to the fore with their first album. Whether that, coupled with another old idea of touring their socks off, will pay off, we'll just have to wait and see.