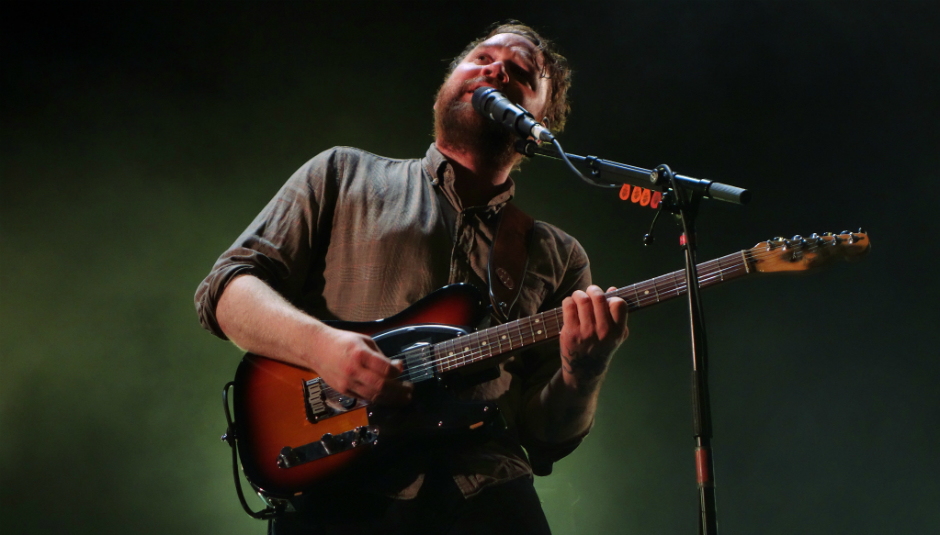 The shock of this tragedy still hangs over us all, a dark cloud that refuses to be blown away. With Frightened Rabbit, Mastersystem, and his solo project Owl John, Scott became one of the best songwriters of our generation, one whose words and music provided so much comfort to so, so many – “a friend in dark times” indeed.

As our founder and Editor-At-Large Sean Adams put it, “Hutchison was more than a conduit of everyday pain. He was able to paint a vivid outline and pin a name-tag to hard-to-describe feelings…At his best, his songs were great big comforting hugs.” And so, in tribute to the man and his art, we asked our contributors to write about what he meant to them, in whatever form they thought appropriate.

Rest easy Scott. You will be sorely missed.

“I am that dickhead in the kitchen…” is a fantastic way to open an album. ‘Acts Of Man’s contempt for base masculinity is laid bare over some of the best lyrics Scott Hutchison ever wrote. In the company of wretched predatory drunks and broken promises, he places perfect phrases and threads of hope. It’s a beautiful demonstration of his skill as a writer, and Pedestrian Verse is just teeming with them. “I’m here / Not heroic but I try”. You succeeded more than most, my friend.

I can already see the vultures circling overhead – those syphilitic ghouls of suicide glamour – and I’m begging them to disperse. There is no gleeful martyrdom to be found here; no portent to be unceremoniously picked apart. There is only a man who brought joy to everyone he encountered, and whose departure leaves the world that much worse off. Goodbye, Scott, and thank you.

They say never meet your heroes. Having heard the heart-warming stories over the last few days of Scott’s generosity and warmth in person, I am gutted never to have met mine. But the first time I saw them live, he stopped the gig to ask if anyone had been a contestant on Ken Bruce’s ‘PopMaster’ on Radio 2. A completely trivial question, of course, and sadly nobody was able to say “Yes”, but the bashful humility of asking gave all the confirmation I needed that there was no difference between Scott Hutchison the musician and Scott Hutchison the person. That is why so many people felt such an affinity to his music: because there were no airs or graces, he was just fumbling, wrestling, and rattling through life like the rest of us.

That is also why the last few days have hit so hard: because, whether through knowing him in person, observing his charm at a gig, or just listening to his poetry through the solace of headphones, he became a friend. And just like a friend should, he has coloured in the best bits of a drunken night and placed a reassuring hand on the shoulder in times of desperate need. It genuinely hurts to know that for all the happiness he gave, he experienced such suffering. I will miss his friendship a great deal, but I am forever grateful for the music and memories he leaves behind.

Bird Is Bored Of Flying

The day before Scott went missing, I had a bit of a meltdown. Sobbing and heart thumping, I said over and over that I was “just under too much pressure”. For weeks I’d been hovering around my limit and ‘Bird Is Bored Of Flying’ became my anthem for dealing with that. The big, fuzzy crescendos reflected the relentlessness of things and how crushed I felt under it. I couldn’t do what everyone expected of me. I needed a rest. “There’s such a thing as too much”, Scott sang. “I want less, I want less, I want less”.

It ended up being the last song I’d ever see him perform. The Mastersystem gigs were short but sweet – the album in full, in order. It seemed fitting at the time, but two weeks later I’d give anything for one more song.

Scott Hutchison’s skill as a songwriter was such that, more than most of his peers, his words worked on two levels. They simultaneously communicated both starkly direct messages and more universal, complex truths. ‘The Modern Leper’ is a case in point. It felt like the definitive Frightened Rabbit song from the moment it was first unveiled, capturing all that was special about Scott’s songwriting through a succinct and powerful depiction of what it’s like living with depression.

I am far from unique in saying that I became, and remained, a Frightened Rabbit fan precisely because Scott’s words often said what I felt like I couldn’t say. I’ve been “rattling through life” with The Midnight Organ Fight in my ears for a decade now, and I still struggle to admit to even many of my nearest and dearest how utterly, all-consumingly miserable my life regularly seems. ‘The Modern Leper’, which not only aptly describes how depression feels but also how it subtly tears one apart from others, has helped me make sense of myself and my relationships with others. It’s hard to think of a more important thing a song could do for someone. Thanks Scott, I’ll miss you.

2nd September 2007. The first time I ever set eyes on Frightened Rabbit at the now-defunct Connect Festival on the site of Inverary Castle. They were playing a teatime slot on a tiny bandstand to a sizable gathering already aware of their heartfelt songs. I managed to get hold of a copy of their debut a few days after returning home and Sing The Greys became a regular fixture on the sound system for the rest of that year.

Over the ensuing couple of years, I interviewed Scott and the rest of the band twice. Each time they were incredibly humble, genuinely interested in discovering new acts to the point where a demo of a band I was helping out at the time led to a prestigious support slot not long after. The Midnight Organ Fight is the record everyone talks about and rightly so, but for me Sing The Greys will always have a special place, being my entry point to both Scott and Frightened Rabbit's music.

Heartache is a crushing blow. It can physically hurt. It’s a pain that makes it hard to breathe, to eat, to function. Scott had the ability to put all this into words, to make sense of the confusion and panic one can feel, and nowhere did he articulate all this better than on ‘My Backwards Walk’, a song that’s absolutely shattering on so many different levels.

“I’m working on erasing you / Just don’t have the proper tools” perfectly captures that post-breakup feeling of being caught between two worlds, and how utterly impossible leaving one seems. And if there’s a cleverer, more astute couplet than “My clothes won’t let me close the door / These trousers seem to love your floor” in a breakup song, I’ve yet to hear it.

Earlier this week I went for a walk. It was sunny, so I headed to the park, and had this in my headphones. I didn’t even get to halfway before the tears started, yet I couldn’t stop listening; on repeat, for nearly half an hour. There’s such beauty in this world, and yet so much pain too – it breaks my heart to think that the latter could overwhelm someone as warm, generous, and kind-hearted as Scott. So thank you – I hope you’ve found peace.

You can read DiS Founder and Editor-At-Large Sean Adam’s piece on sharing grief on social media here, and our recent Fangasm on The Midnight Organ Fight can be read here.

“Maybe we should just do 'Shady Lane'...