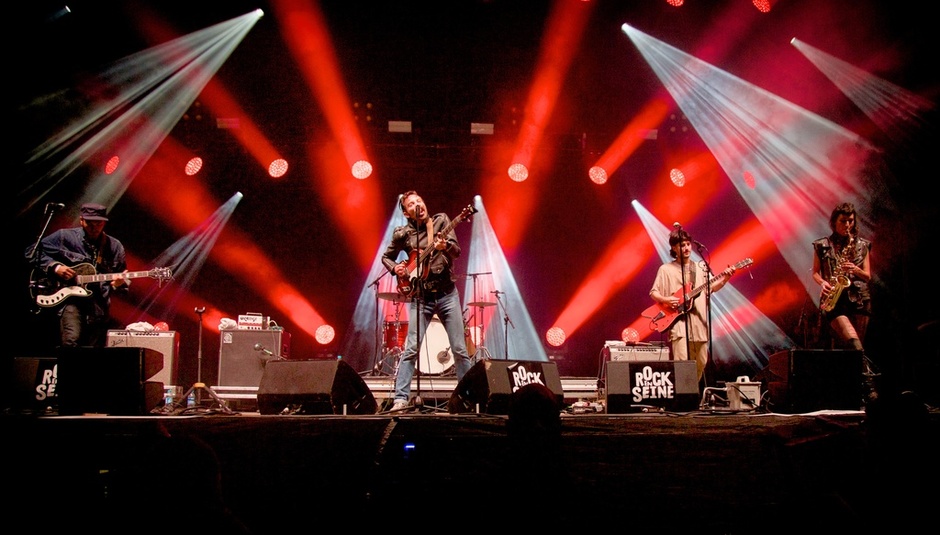 While the August Bank Holiday traditionally coincides with Reading and Leeds as far as the UK music industry is concerned, across the channel there's another event taking place that usurps both of those in terms of location and content.

Taking place in the beautiful surroundings of the Parc De Saint-Cloude in the Hauts-De-Seine region of Paris, Rock En Seine has become one of France's most prestigious outdoor music festivals having grown considerably since its inaugural event back in 2003. Now in its fifteenth year, the 2017 edition played host to approximately 110,000 attendees across its three days of which Saturday was a complete sell-out. Featuring around 80 artists playing across six stages of music over the course of the weekend. It provided a welcome respite from the bank holiday hustle and bustle back home not to mention spoiling us with one of the finest line-ups anywhere this summer.

Of course, what that means is some clashes are inevitable but thanks to some careful planning by the festival's programmers it's possible to see most of what's on offer give or take the occasional distant walk between Rock En Seine's sparsely spread out stages. Elsewhere, while food and drink is pricier than at most mainland European counterparts (Paris in general is expensive), the quality on offer (the ham and cheese raclettes really are something else!) is of a far superior standard to pretty much any other festival DiS has attended this year.

One minor criticism would be the lack of other entertainment options should one become tired of watching live music all day and night, but then with such a mouthwatering bill this rarely became an issue. Having arrived onsite early Friday evening - logistically it isn't the easiest part of the city to get to - we arrive too late for Cabbage and Beach Fossils' sets. Fortunately, At The Drive-In's blistering run through the best bits of their catalogue both past and present is as good an introduction as any. Opening with 'Arcarsenal' and finishing on 'One Armed Scissor' alongside material from this year's in•ter a•li•a in between, frontman Cedric Bixler even finds time to reference Japanese video game Metal Gear Solid before delivering a crushing 'Enfilade' in what was an all too short but utterly enthralling set.

Another band who've returned with their first new album in over a decade this year are The Jesus And Mary Chain, and unsurprisingly their appearance on the Scene De La Cascade (second) stage is watched by one of the weekend's biggest crowds. Playing a set that's split evenly between old and new material, it's heartwarming to see newer compositions 'All Things Must Pass' and 'Always Sad' off this year's Damage And Joy receive the same level of adulation as the more familiar likes of 'Some Candy Talking' and 'Just Like Honey' from their rightly revered past.

Having been the victims of a terrorist threat just 48 hours earlier that saw their show in Rotterdam cancelled minutes before going on stage, it was a case of business as usual for California's Allah Las. Playing to a near packed crowd on the Scene Du Bosquet stage, their West Coast inspired psychedelia went down a treat, former singles 'Tell Me (What's On Your Mind)' and 'Had It All' in particular. Played back to back midset, they set the scene impeccably for what followed including a glorious rendition of The Human Expression's garage rock classic 'Calm Me Down' in the band's own inimitable style while also staying true to the original.

As Friday's entertainment reaches its climax, the day's first big clash came upon us which Black Lips won by the toss of a coin from The Shins. With a new album on the way (Satan's Graffiti Or God’s Art?) not to mention two new members on board in the shape of drummer Oakley Munson and saxophone player Zumi Rosow, there's a different dynamic particularly with the latter's contribution to some of the older material such as 'Modern Art' and 'Dirty Hands'. Nevertheless, one thing that never changes at a Black Lips show is the raucous behaviour of dual frontmen Cole Alexander and Jared Swilley which transcends itself to the audience resulting in the weekend's most frenzied moshpit. As with Allah Las, they also find time to throw in a cover of a garage rock classic in the shape of The Count Five's 'Psychotic Reaction' that's as charged up and explosive as you'd expect from the Atlanta five-piece.

The next day, Parisian four-piece Therapie Taxi deliver an energetic introduction to the day's proceedings. Having enjoyed their stripped down set as a two-piece on the Eurostar the previous day, their full band show here in all its electronic glory reminds us of April Towers or Confidence Man albeit with a repertoire sang entire in French. While still early days in the band's career - their first album is scheduled for release next January - they're definitely ones to watch out for over the coming months.

Reading's Ulrika Spacek are another band in the middle of a rewarding 2017 having released their second album Modern English Decoration to a wealth of critical acclaim whilst bagging tour supports with Slowdive and Ride in the process. Here, their late afternoon slot in the blistering sun finds them at their most blissful and the large crowd who've turned up to see the band proves equally appreciative in their response.

One of the UK's most encouraging success stories in recent years has been the emergence and continual upwards trajectory of Nottingham duo Sleaford Mods. While it would be difficult to pinpoint exactly what it is about them that engages so many European audiences to respond so rapidly to Jason Williamson's vitriolic rants about such things as Sneinton market and 1980s Saturday morning television shows, their set here is perfect for this setting. Maybe it's the post-Brexit anger Williamson exudes so well, but the sight of 10,000 French revellers collectively losing their shit to the likes of 'Army Nights' and 'Jolly Fucker' is a delight to behold.

Its nearly 40 degrees on Sunday afternoon and DiS can barely see for the sweat dripping in our eyes, so its anyone's guess how King Khan & The Shrines can turn in such an energetic and ultimately impressive performance in all that clobber. French hip hop artist Gracy Hopkins also gets several thousand hands waving in there whilst instructing them to jump simultaneously. It's not quite Kanye West on the Pyramid Stage at Glastonbury but it makes perfect sense right here right now. Will Toledo and Car Seat Headrest might be more suited to a later stage time after the sun has set, but when you've songs with the adolescent beauty of 'Vincent' or 'Maud Gone' played by a band who attack every chord as if their lives depended on it there's little in the way of criticism to offer.

Better still are Rendez-Vous, a four-piece from Paris whose music and overall on stage demeanour is reminiscent of New Order, Einsturzende Neubaten, HEALTH and the Sisters Of Mercy. Their set on the Scene De L'industrie stage is greeted by one of the most rapturous audiences of the weekend while 'Distance' is sure to be a darkwave synthpop anthem for years to come. Ultimately, they're a revelation and one whose name should be known far beyond their native city.

Ty Segall's functional exercise in garage rock becomes a tad laborious after a while although it's slightly more entertaining than Mac De Marco's indie Robbie Williams spiel. When Cypress Hill's Sen Dog takes to the Grande Scene stage sporting a massive doobie in his right hand he unsurprisingly manages to engage every member of the audience in the other. Playing a set that highlights how much of a groundbreaking album Black Sunday was back in 1993 while demonstrating Cypress Hill's relevance in the present, they're an enjoyable aside to this evening's main event.

Because that accolade undoubtedly belongs to Slowdive. A band who just keep getting better with age. This year's self-titled fourth LP might have been their first in over twenty years but the three songs they play from it fit seamlessly into the rest of their ten-song set. Flawless from start to finish, there are several peaks throughout the band's hour long performance. Most notably the dubby 'Souvlaki Space Station' which segues into a dreamy 'When The Sun Hits' midset, and the now customary finale of 'Golden Hair' which builds into a rapturous crescendo signalling the end of the show. If there's a more fitting way to end a festival I'm yet to witness it.