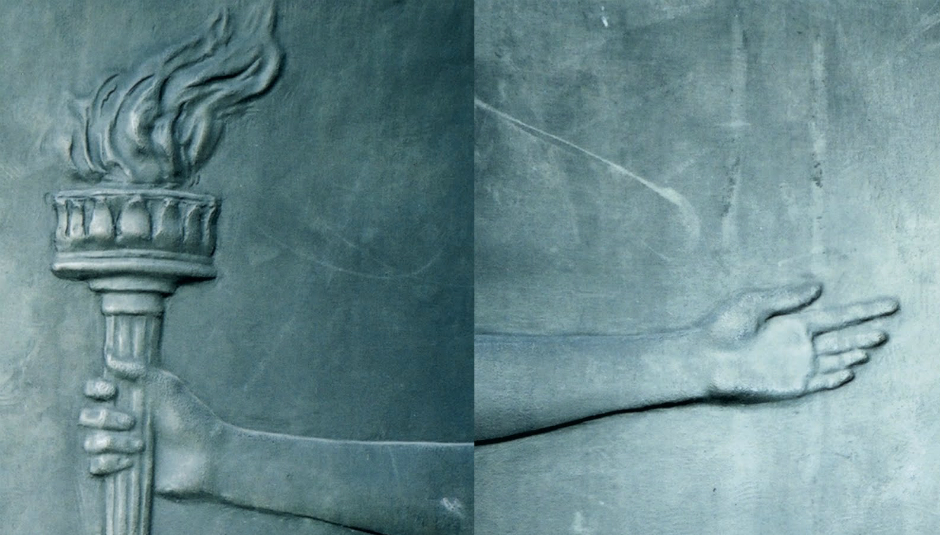 I’ve previously noted that Unwound, one of America's pre-eminent 90's "post-hardcore" bands, constantly lived in the shadow of Fugazi. This wasn't meant as disrespect to the legendary Washington, D.C band; on the contrary, it was meant to demonstrate how they remained the masters of a genre and genuine counter-culture movement during a decade where America especially seemed obsessed with exploiting said culture with its branding of "Generation X".

Fugazi's dual-frontmen, Ian MacKaye and Guy Picciotto are also relevant to the birth of the 80's DIY scene, and how it became one of many factors that would become instrumental in the 90's "alt-rock/grunge" explosion that began with Nirvana's Nevermind. MacKaye's Discord Records label was created out of the dissolution of his and drummer Jeff Nelson's punk band Teen Idles. They went on to create the endlessly influential hardcore band Minor Threat in 1980, self-releasing their music after Teen Idles' split, and it became a historic moment for punk and hardcore music not just in their native Washington, D.C but also, eventually, America in general.

Discord were different due to their strict D.I.Y ethos. As a label, they had three simple rules: Promote everything themselves; sell their music at discounted prices, avoiding major distribution costs (records generally sold for $5); promote the Washington D.C scene. Due to MacKaye and Nelson's trailblazing, D.C continues to have a healthy D.I.Y-punk scene to this day, some 35 years later. Amongst the label's alumni include: Iain Svenonious' fronted outfit, The Nation Of Ulysses; Scream, featuring a (very) young Dave Grohl on drums; influencers such as The Faith, Void, Lungfish and EMO's "revolution summer" bands (MacKaye's Embrace, Picciotto's Rites of Spring, Dag Nasty, Gray Matter); eventual major-label 90's alt-rockers Jawbox, Shudder To Think and future indie darlings such as Q and Not U.

After a decade of these short-lived but massively important bands, Mackaye grew weary of short-lived projects and wished to graduate to something a bit longer lasting. He recruited a friend on bass, the Jah Wobble-influenced Joe Lally, who had previously had nothing to do with the D.C scene, the drummer of Rites Of Spring, Brendan Canty, as well as vocalist Guy Picciotto. In 1988, one of the first songs they ever wrote, ‘Waiting Room’, remains a perfect document of what the band initially stood for; fiery vocals – including Guy Picciotto's original role as "hype man", a punk version of Flavour Flav if you will – punchy guitar and drums, and a reggae influenced bass line.

In the period between their first releases – the Waiting Room and Margin Walker EPs, later known as 13 Songs – and Nirvana's explosion in 1991, the band toured relentlessly and released two hugely influential albums, most notably their debut full length Repeater. While the band refused promotional videos or air time on mainstream channels, they created such a cult fan base from relentless touring of all-ages venues, charging a maximum of $10 per ticket, and such highly consistent music that by the time the explosion of, and inevitable fallout from, Nirvana happened, Fugazi were a huge target for major labels. In 1993 they released a particularly high-benchmark in In On The Kill Taker, originally recorded by Steve Albini but eventually nixed, which became not only their first Billboard charting record but one of the only examples of an independently released record to do so. However, despite being offered the world, Fugazi stayed steadfastly D.I.Y, refusing to sell out to offers from Atlantic Records and Lollapalooza festival so they could continue building their already massive fan base organically.

Kill Taker represents the peak of the first half of Fugazi's existence, i.e Fugazi the "post-hardcore" band. Their follow ups, 1995's Red Medicine and 1998's End Hits saw the band moving into more experimental territory (and this is where Unwound's timeline lines up). Both are great records, but there is a clear movement towards something bigger. This is best demonstrated by the documentary Instrument which shows footage of the band at their home studio and Inner Ear writing these slower, more considered jams for these two albums. That isn't to say the band had lost sight of their original ideas or sound – there are still plenty of ragers to be found on these two records – but there is a clear step-away from Kill Taker's relentlessness here.

In the new millennium, just like Unwound's Leaves Turn Inside You, Fugazi set about creating something markedly different and "bigger" from their earlier work, and what would become their defining statement in The Argument. Just like Unwound's final record, Fugazi decided to take much longer in the studio crafting a universe as much of an album. For Fugazi, this largely meant listening to The Beatles. In interviews, MacKaye especially often mentioned he was a sucker for "power-pop", and throughout Fugazi's back-catalogue, there is a somewhat surprising ear for melodies that most punk bands wouldn't have even considered an option. Fugazi were masters of subtlety throughout their career, a large reason why they stood apart. From Picciotto's falsetto and MacKaye's tempered vocals, to their interweaving guitars and Lally's frankly out of this world basslines, to Canty's solid-as-a-rock drumming, they were always a band who clearly resembled a punk group that had a world-view both musically and politically that unshackled them from simple classification.

In many ways then, The Argument was the natural end-point for Fugazi. Right from its opening gambit, it doesn’t mess around; initially, any Fugazi fan at the time would be forgiven for thinking they had mistakenly put on the album ten years it’s junior, Repeater, as the opening drone sounds remarkably similar to ‘Turnover’. In fairness, one could see ‘Cashout’ as an unofficial sequel to that song; it builds in a very similar way and is led by Lally's idiosyncratic bass. The major differences, however, are this is a MacKaye-led song, not Picciotto, and there is far more groove to be found in Lally and Canty's playing here than ever before.

This is followed by a single snare hit, and probably the closest Fugazi ever came to a full-on "pop song". The aforementioned Jah Wobble comparison comes to the fore, as not only is Lally's walking bassline a keynote to 'Full Disclosure', but Picciotto goes full Public Image Ltd-era John Lydon, reminiscent of that band's anthemic title track. Immediately after, MacKaye gets his "pop hit" in with 'Epic Problem', where Canty is joined by a second drummer, stage hand Jerry Busher, who adds a force of nature that has to really be seen to be believed.

The opening three tracks of The Arguement seem like an impossible standard to set even by Fugazi's already very high benchmark. Once the two “big” pop-punk songs are out of the way though, the band keep the momentum going in a much more sultry, more considered mood. 'Life And Limb' sees Picciotto give one of his best vocal performances with the mantra "Hey, we want a violence double!", backed by Kathi Wilcox of Bikini Kill and using handclaps. Meanwhile, Joe Lally gets a turn at the helm on the atmospheric 'The Kill'.

The album's true heart, however, comes with Picciotto's one-two punch 'Strangelight' and 'Oh'. A huge part of this album's strength is its sequencing; ‘Strangelight’ perfectly segues from Lally's post-rock jam, opening on a single, reverb-drenched, arpeggiated guitar line, but once the rest of the band join, they threaten a storm. After a second (mostly) solo verse, they go full-pelt into the song's chorus - "Take your shoes off, come on over baby!" and after that, we enter Sgt. Pepper's Lonely Hearts Club Band territory. The entrance of a string-quartet in this song's middle eight, and effectively, right in the middle of the record, is such a surprise the first time you hear it but when it does, everything about the band and the album clicks into place.

'Oh' gets to announce itself immediately as a result of the previous track's crescendo, thanks again to wonderful sequencing, and we get a groove-inflicted song that once again slowly devolves into chaos. The key-strength is the way it slowly builds its layers, getting tenser as it moves along, before eventually demolishing them with a wrecking ball of a fill from Canty. Part of this record's glory is Picciotto finding more and more ways to push his voice, and this is an excellent example. While MacKaye has a slightly more limited range, his final coda of "Think you soon better have another" again shows its 60's pop influence.

If there is a single criticism to be levelled against The Argument, it's that 'Ex-Spectator' doesn't quite match up to the rest of the album. It is a similar feeling I get with 'Electioneering' on OK Computer; while both are excellent in their own right, their outright rock style sounds just a little out of place in the context of the rest of the material. Meanwhile, 'Nightshop' is a brilliant tension builder, while MacKaye (and Fugazi)'s final statement "Here comes the argument" on the title-track is appropriately open-ended for a band who never officially split up and are still "on hiatus" 15 years later.

There is no clear consensus on which is the "best" Fugazi album – that largely depends on what era of the band you prefer and when/how you got into them. There is an argument that can and has been made for any of the band's incredibly consistent oeuvre, including 13 Songs. For me, and many others, however, Fugazi was always about moving forward. There is no bad Fugazi record, but their best records are the ones where they push themselves hard. There is evidence of that on each of their records, but equally why Repeater and In On The Kill Taker especially get so highly praised. This is why The Argument regularly gets called their grandest statement; it is the sound of a band who progressed beyond their humble beginnings from over a decade previous and created something that subverts easy genre classification.

What’s most important when considering Fugazi is to realize that no other band managed to create so much success for themselves, especially during a time when their style of music actually became "popular" in the wider mainstream conscious. Practically any other band in their position would have taken the money and ran back in 1992/3, as so many bands did, and ended up flopping around in the major-label airwaves and becoming cynical, jaded and forgotten before the 90s were even through.

Fugazi's fierce DIY spirit, coupled with having lived through the 80s and early 90s as a key proponent of what lead to Nirvana and alt-rock's rise, meant they stayed the course and never diminished themselves. At a time where this seems increasingly impossible, they remain one of the most admirable forces in music to have ever existed. If they never reform (and given the amount of money they'd have to resist, I'm not sure it is likely) be thankful that they ever existed at all.

How I Learned To Stop Worrying And Lo...