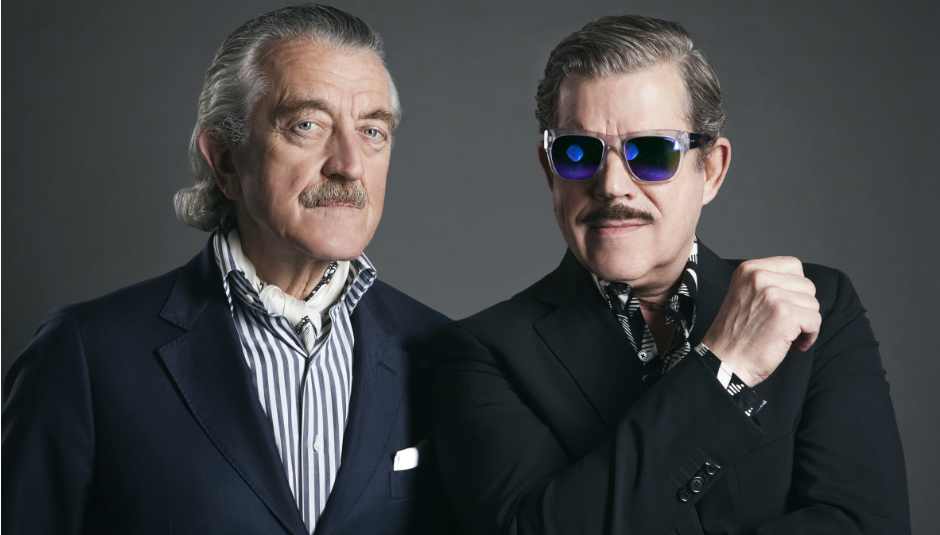 If you think you know nothing of pioneering Swiss electronic band Yello, you’re mistaken. From ‘Oh Yeah’, which famously featured in Ferris Bueller’s Day Off and The Secrets Of My Success, inspired Duffman from The Simpsons, and has become the byword for the sonic representation of lust, to ‘The Race’, another tune that, at one point in the early nineties, was pretty much ubiquitous in popular culture, their music has reached far further than their fame ever has. Back with their first studio album since 2009’s Touch Yello, they’ve also announced their first ever live performances, remarkable for a band who formed in 1978 and have played such a prominent role in popular culture ever since.

We asked Dieter Meier and Boris Blank to give us the lowdown on new album Toy, which is out now on Universal.

This is an up-tempo, almost danceable, driven track and I had to fight a lot to get this to be a single. I rebuilt some parts and I rebuilt the refrain, and I think this is just a very significant, dry Yello track which I like a lot.

Overall, the character of this song for me is like being driven. I feel as if I'm driving in a car, driving towards the horizon, just out of reach of all kinds of problems on this planet and just having fun. I hear an almost West Coast kind of character in the song.

'Electrified Two' will only appear on the luxury limited edition CD, but it was such a challenge for me to keep this song on track. It was a real challenge to balance a voice like Dieter's with Malia's kind of jazzy voice within the rocky structure of the track, and to keep it as open as it was on my retrospective solo album but with a touch more static in it. The voices bring a lot of the static and make it even more powerful, adding more strength to it.

'Cold Flame' was one of the tracks I had kept for years in my portfolio. I work like a painter; a painter has a lot of both finished and unfinished pictures in his atelier. This was one of the tracks I worked on years ago, and I just picked it out again and thought: “Wow.” It had a good feeling with the organ – a kind of funky, moody, house-y touch. I just needed a voice and I invited Malia and she came along with very nice ideas. Part of the lyrics already existed on our album on ‘Convergence’, which we did together years ago. I just brought her voice to this very unusual track and she began to sing along live.

'Kiss The Cloud' is a very interesting number because it was the first collaboration between me and Fifi Rong. When I met her in London at the release party of my solo album Electrified, I thought we should work together or try to do something because I loved her voice in the work she’d done with her own band. She was in Beijing at the time, so she recorded her part to the track in a hotel room. I sent her the empty track and she sent me back 25 single tracks with her voice on and I just moved them around, like a patchwork. I took some vocal parts from the end of the song and put them at the beginning, and just moved them around. At the end, of course, I had to ask her whether or not she liked the chronology of her voice, and she loved it a lot.

'Starlight Scene' for me had a very spontaneous working process. Malia was there whist Dieter started singing this track, and he said: “Hey, Malia, let's try and just go to the microphone,” and she started singing this little refrain melody very spontaneously. By the first or second track we thought 'Wow, that's it, it's great, we’ll use it.' It has a very good balance between the very low - almost macho - voice from Dieter together with the very high, ironic lyrics and voice of Malia. It's sort of a traditional song with a touch of Yello in it.

Give You The World

'Give You The World' was a track which I worked on about four years ago for Malia's album, but then we decided it didn’t suit her jazzy, more moody album. Then I picked it up again and played it to Dieter and he thought: ”Wow that's a nice track, this is very Yello, why don't we use it for our album?” And it's Malia who sings a very nice, sort of simple but strong line in this track and it's just quite a powerful song.

'Dialectical Kid' is another track which we worked on a few years ago and decided not to put in an exhibition (like painters used to make exhibitions) on our last album -Touch Yello_. It's a mix between Dieter's percussive vocals and Heidi Happy's very mysterious little refrain, which comes together quite colorfully.

I made this track years ago for the ship 'PlanetSolar' - a French-German-Swiss collaboration to build a solar powered boat. I was invited to make a soundtrack for this project and was also invited to Monte Carlo to see the boat returning after its maiden voyage. It was a little adventure being even a dry part of this project.

Just as on the last album, here I set myself a little challenge to have a psychedelic track. This song suits the atmosphere of being a hippie in the late sixties, early seventies, with long hair, smoking some dope or whatever. It has this laziness - the kind of feeling I had at the time when I was a hippie. It features nonsensical lyrics which I use because the phonetics are more important for the feeling in each song. Just like when I hear Elvis Presley’s 'Love Me tender', the phonetic points here make the rhythm in a word or in a phrase.

This was the first or second track I sent to Fifi Rong and she replied: “You know Boris, we Chinese are more sensual-orientated, we like more relaxing songs but I’ll try it.” When she came back with the lyrics from her home in London, I thought: “Wow, it's quite charming.” It’s a great contrast to the up-tempo music, which is almost like industrial early techno from the mid or late seventies. The contrast is full of tension. It's a thrill to listen to that track and, for me, it has this slightly exotic feeling of this culture of China.

I began working on this track about five years ago for an exhibition in Beijing. For me, being in a gallery is like looking through a kaleidoscope; you see so many different facets of pictures and this sticks in my head. So I made the song out of almost dada-esque placed voices, they come from everywhere. Like when you walk around a gallery, you hear some voices and some trumpets, some guitar fragments whatever, it's kind of chaotic, but still it steers you through a strange landscape. That was the idea behind it.

This track is about 25 years-old. I just dug it out out of this huge archive of tracks I have, freshened it up with a few other fragments of sound, and kept it more or less like it was 25 years ago. It's still quite a timeless song, and funny and humorous.

My best friend Ian Tregoning suggested I do a longer version of the intro, and that's it.

Toy is out now on Universal. For more information about the band, visit their official website.