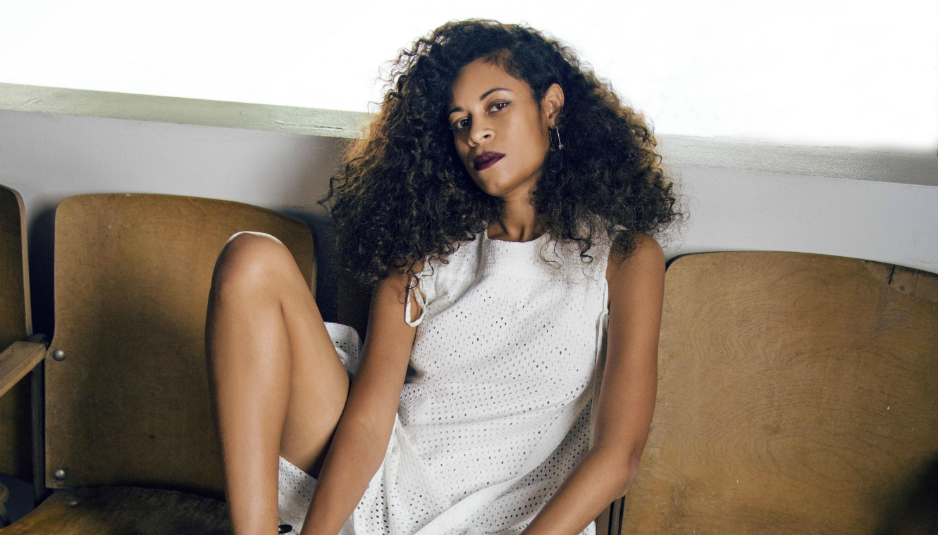 Full disclosure; DiS is a touch hungover upon calling up Aluna Francis of AlunaGeorge fame (but ‘Just A Touch’, geddit?) on an otherwise relatively grey and pedestrian Wednesday afternoon. Though Francis sounds mildly horrified by your faithful scribe’s Tuesday night debauchery – the life of a freelancer, kids – she’s a sound and non-judgemental sort, so we’re good. I think.

She’s got enough on her mind, anyway, what with the release of new record I Remember, the somewhat long-awaited follow-up to 2013’s striking Body Music - Francis herself admits the entire process has felt like it’s gone on “forever”. There’s a possible general restlessness at play, also. Prior to our chat, the vocalist got all cryptic on Twitter, posting the following three-tweet string:

”That first moment after a set back and you’re like… where is my miracle? And when that miracle doesn’t arrive… is it easy come, easy go? Or do I get up n make that shit happen?? Maybe life’s just playing me… Or it’s a mystery that manifests in misery, but when you crack the code there is liberty.”

So, what’s all that about?

“I’ve got to decide whether I’m going to try and find a way around this roadblock that I’ve met,” she elaborates. “It’s one of those things where you’ve got to weigh up the probability of winning. How do you do that?! Life is so unpredictable. I am trying to come up with something that has never been come up with before, which in this day and age of Internet name-buying and name use is quite difficult.

“I come up against this when I’m writing lyrics, when I’m thinking of a new idea for a song – everything has been done before. It’s really frustrating. Artistically, you can make your mark in lots of little ways but legally, in the public sphere at least, sometimes that’s just not okay. So it’s frustrating that somebody on the other side of the planet has come up with literally the exact same idea that you have.”

With that kinda-sorta cleared up, attention turns to Francis’ and musical other half George Reid’s new baby. I Remember is a confident effort from the off, with ‘Full Swing’ setting a relaxed but engaging tone that the likes of the biting ‘Mean What I Mean’ and the similarly busy, Popcaan-assisted ‘I’m In Control’ bounce smartly off. Francis, in particular, sounds laser-focused and there’s a sense that she wanted to make a real statement here.

DiS: ‘Difficult second album’ and all that, but how was it for you?

Aluna Francis: We went through a process of really understanding what pressure, whether coming from outside or self-imposed, actually meant. At the same time, when the general public and the listeners were saying, ‘C’mon, release an album’, what they weren’t saying was, ‘Release a shit album, just because I’ve asked you to do it’, so we had to work that out and realise that we were going to release a good album and it’s going to take as long as it takes to get there.”

Let’s get literal with that title – what’s your earliest memory?

That would be going to kindergarten in New Jersey and walking up what seemed like the hugest flight of stairs in the universe. The hallway was dark and I remember opening the door to this colourful and bright cacophony of noises with all the kids doing kid stuff and it felt like I was travelling into Narnia or something.

Has it felt similarly overwhelming navigating the music industry over the past few years? You’ve noted before that you’ve had the displeasure of working with some “absolutely narcissistic nut jobs”.

I guess I’ve survived this long with my sanity through the process of finding really incredible people to work with and keeping them close to me. Something I learned along the way must have helped with that, because I think learning about who you need around you is a really huge thing. It’s hard to work out. It’s hard to deal with people’s characters and really manage your expectations of their development and see the value in loyalty and in real love that you can share, even though you’re running a business.

What was most apparent in regards to this record?

The biggest thing I’ve learned is how to draw from my own stories. That was hard for me because I like to write songs that have perspective and a journey and a resolve. If you’re stuck in your own experience, just in your day-to-day life, it’s very difficult to get perspective on your own situation. The process of song-writing that I’ve developed has helped me to get that perspective and resolve, so it’s two-fold; I’ve been able to write songs that draw from my personal life and writing those songs has actually helped me through the issues that I’m addressing in them.

It feels like a personal record, one that speaks to somebody who wants to be properly listened to.

Yeah, definitely. I think I’ve grown into that person. I’ve always had strong opinions and thought about things very deeply. I’ve always had something to say but the confidence to stand by those convictions has grown slowly over time.

Tracks like ‘Mean What I Mean’ and ‘I’m In Control’ have the requisite hooks, but it feels like you’re making specific and personal statements there, too.

Extremely personal statements. They come from absolutely real situations that I needed to process and get some kind of benefit from. I don’t like to go through something difficult and have no way of using that experience to help myself and to help my future self. Sometimes it’s hard to do, but the message in those songs shows that I worked at least something out.

I don’t have all the answers but it was really good fun to think about the next time someone crosses my boundaries and tries to confuse me when I’m saying ‘no’, to try and tell me that I ‘don’t mean that’… I feel like I know what I’m going to do in that situation now. Whereas before I wrote those songs I felt stuck in a rut where I didn’t have the confidence to defend myself and it was a really entrapping, sad and lonely dark place that had arisen out of that scenario.

It’s a confident record. You don’t get the impression that you struggled.

Confidence has never really come naturally to me. It comes through the support of my friends, thinking about what kind of challenges I’m coming up against and thinking of why I’m not confident enough to deal with them. That, and finding a way forward. You don’t just wake up one day and believe that you are the best person alive and you’re really strong and you stand by yourself. That kind of confidence is good, but it’s temporary. In the end, in order to really apply it to lots of different situations, you need to go deeper.

With that in mind, we’re seeing a fresh rise in feminism and more focus on a woman’s place in the music industry and the wider world. What’s your take on things?

There’s so many different takes and I guess I try to go back to fundamentals. Whatever way that you’re fighting for feminism is going to be your particular niche. If somebody else is fighting for it in a different way, that’s fine. It’s all got to be seen as part of the same fight and it’s hard to reconcile when two people fighting the same cause want to fight each other, as if it matters who’s ‘doing it better’. That’s a waste of energy and I prefer to support whoever is doing something to move us forward and see how my own particular language develops.

I have some fairly radical views of my own which I would like to develop in the next few years. It’s scary in the sense that I would imagine there could be a real backlash when it comes to what I’m saying, so I’m building up the confidence to start a new dialogue for my own brand of feminism and I would like to think that people would support me.

Women need so much support in healing the damage that has been done to them through men’s violence, but you tend to feel that there isn’t enough attention placed on violence towards young boys, as though it’s going to take away attention from women who are hurting. Although it seems really painful to do, there is no way forward because the cycle is going to continue. We have to go back to the roots and realise that young boys are very vulnerable to men’s oppression against other men for generations, and then women’s oppression against young boys is an internalised oppression through their own mistreatment. I think we’re missing a trick by not looking at that.

To finish by going back to your earliest memory, was it a happy childhood?

I had a mixed childhood. My relationship with my mum was great, but she was a single mother and didn’t have much support and we experienced the challenges that came with that. Being a child of colour growing up in a completely white society brought about its own challenges. In terms of direct contact with the adults around me, it was a mixed bag. Nothing extreme, though. A lot of where I’m coming from is through empathy, rather than having a ton of different abusive experiences that enables me to relate to the abusive experiences of others. I just have a ton of emotional empathy where I understand that people have gone through very bad things and I’m interested in that and I’m invested in shining a perspective on that.

I Remember is out now on Island Records. For more information, please visit the band’s official website.

The Friday Fangasm: Frances The Mute ...