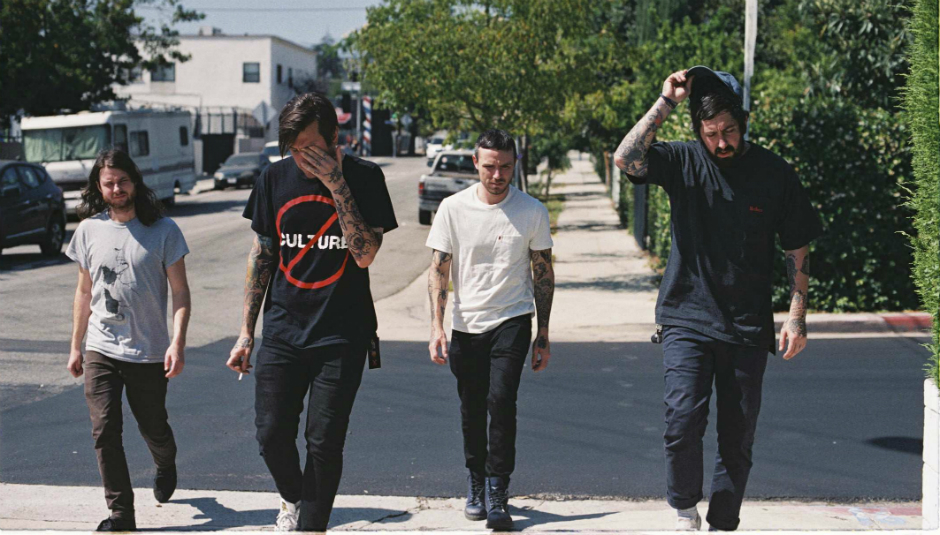 If you don’t know about Philadelphia quartet Nothing, you really should. There isn’t that much to say though. If you like the heaviness of the Deftones and the, well, heaviness of MBV, you’ll love nothing. If you don’t, well, you don’t. Their first album, ‘Guilty of Everything’ opened the eyes and ears of the discontented, the metal heads, and the shoegazers, and swirled in tidal waves of guitar distortion without being a shoegaze-as-fashion statement. Far from it; read the lyrics to their poems of despair and your left feeling pretty numb, Nothing give no regard to decoration.

Second album Tired of Tomorrow has recently hit. And while it comes amidst a justifiable level of anticipation, it wasn’t smooth sailing. Having initially been signed to Geoff Rickley (formerly) of Thursday’s Collect Records, that had to change and the album came out on Relapse Records. The story and consequent delay is superbly documented on YouTube in a video put live in advance of the album’s release. But from the storm and stress, the result is worth it, so worth it. We spoke to frontman and guitarist Domenic Palermo.

DiS: For someone who’s coming to the band afresh, to watch the Tired of Tomorrow documentary that you put on YouTube as an introduction will be an eye opener, and in part gives context to the huge and cathartic sense of release that pervades your music, that sense of tension and release. What does music, and what does being in nothing, give you as an individual?

Domenic Palermo: I had a rough stretch, maybe a decade or so, that was almost so bad it was, almost, laughable. One of those, ‘what could go wrong, will’ type scenarios. This was a means to carry on, in the beginning. It was the only thing out there that could help me hold the weight I walked around with, besides the temporary erasing alcohol and drugs would do. Like all things that help though, I became quite addicted, and like most addictions it slowly becomes not enough and you find yourself back at the drawing board. There is not much out there that sorts me out besides it, so I still cling.

And part of that decade included time in prison. It has to be asked, was it hard being in prison for two years? You’ve had, as a band, many challenging experiences. Do those experiences inform the music or is Nothing a chance for you to step away, be it momentarily, from those difficult experiences? From the documentary it seems that you can’t help carry those experiences with you, in some way.

There isn't really any stepping away. It was tough, but it became home like anywhere can. Anywhere can be home if you're there long enough. If you're living in pain, pain becomes home, and home doesn't have to be comfortable; it just means you spend most of your time there. I've been living in a mindset for quite some time now, and it's not living in an urgency, it's quite the opposite. It's not been about the moments in a long time, it's more the whole picture that makes me grieve. The pain the world feels constantly is what keeps me awake.

The words in your music are powerful. In an age where we're constantly being bombarded with political/media messages that use fear to encourage an ongoing unconscious unease, and compliance, and messages from corporations that say using their products is a time when we're 'allowed' to be happy, do you think that now, more than ever, music has a role in helping people develop and then retain their own personalities? Who do you find is drawn to your music?

Music is absolute shit right now and minus maybe 1% of it, it's all meaningless nonsense. It doesn't stop there, it just begins. Your faithful music critics have taken the bait and push whoever is paying the top dollar or is using the right publicist. Politics are invading in all the wrong ways. The independents’ minds are gone. Race, religion, and gender are being used for financial and popular gain. Everything is a mess and no one is following their gut, they're following the masses. It's bleak but none of it will matter when our own earth consumes us. I can't wait.

And yet given the gravitas of what you say, you’ve released an emoji range which as an action, juxtaposes humour against the heavy, serious nature of your music. Similarly, your video for 'Vertigo Flowers' also has a macabre element of humour in it. How important is having a sense of humour to you as a band and as individuals throughout everything that’s going on?

How isn't it all a joke? How can you look at everything that has been presented to us thus far in history and say otherwise. It's all laughable. I would sooner stick my head in front of a speeding train than try and make this life even more of a mockery and act serious about it all. These poor tortured souls who wear only black and gloves on stage while they scream of the atrocities. Interviews of the hopelessness and despair they confront daily from their sunny apartment in Los Angeles.

If you're not gonna off yourself I hope you're laughing at it all, or just keep smiling like the dope you are and pretend it isn't happening while you continue to stalk Kanye West’s Twitter. You can't have it both ways. The latter is a better reason to choose the first option.

An event that had a huge impact on Tired of Tomorrow, although it has nothing to do with the music, is that you had to walk away from the first label who were scheduled to put it out because they were backed by Martin Shkreli. But label head honcho Geoff Rickley clearly believed in you a tonne so you have to feel for the guy. Are you still in touch with Geoff and do you know if he has managed to bounce back?

Everyone makes mistakes, Lord knows I have so who am I to judge? I bled and breathed into that record. I didn't want it to be affected by some rich kid clown who steps on human lives for enormous mounds of cash. It’s pathetic when you think about how this ends for all of us. Geoff is ok, I'm sure Martin is too.

If I was always tired of tomorrow, I’d be depressed. Is this a depressing album?

It’s an accurate title for the album. Not depressed, tired.

It seems more focused, harder hitting – was the writing process different from Guilty of Everything?

Not really. Brandon (Setta, lead guitar) and myself get together and smash things that we wrote together and shovel it into some sort of recording device and boom, you have a hit. It’s pretty easy honestly.

Lyrically your feelings sound like bleak, almost modern-gothic, poetry and are hugely visual. Where do the words come from and does romanticism as an emotion, if not a cultural period, influence you?

I enjoy the fact that I can pick up a book from any era and find that there is someone in there describing the feelings I have for the world. That to me is very important. No one is saying anything new. Everything that can be said has undoubtedly been said over and over again. I write for me and for anyone later who is confused by it all and needs someone to confide in, to feel not so alone. There are people like us out there, few and far between. We're not of the same species. If you're reading this you're probably not though.

How was working with Will Yip? He’s Philadelphia-based, are you involved with the local music scene?

Will Yip was brilliant in the studio. I knew this because I'm quite brilliant myself. I don't like anyone in Philadelphia... or anywhere for that matter.

Nothing are touring the UK and Europe this month. For full dates click here.