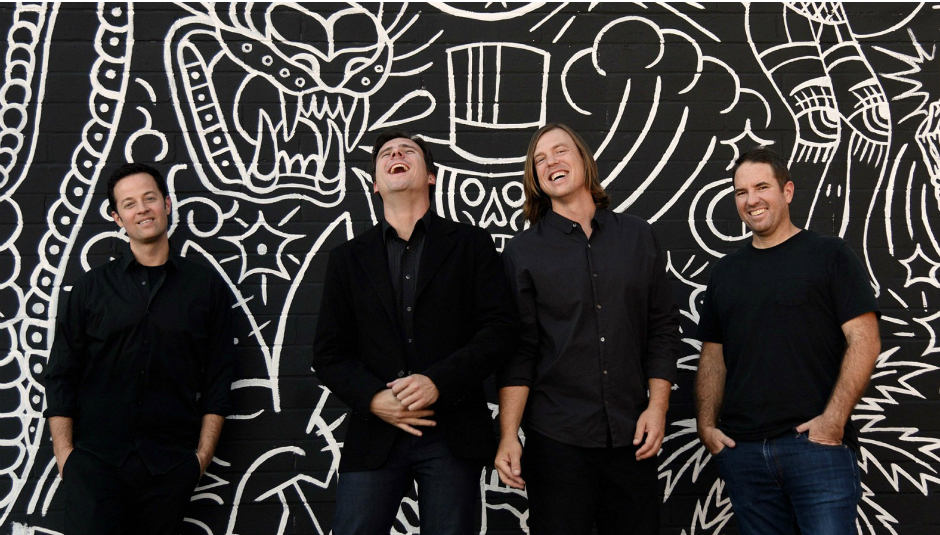 A Band You Can Trust: DiS Meets Jimmy Eat World

A Band You Can Trust: DiS Meets Jimmy Eat World

"I think there are lots of things that we as music fans like, and within what we've done and how we like to play - that could mean a lot of different things,” ponders frontman Jim Adkins, already aching as he squirms his way around that question about their latest shift in sound. While the casual ear will recognise Jimmy Eat World for the pop-emo radio hits of ‘The Middle’ and ‘Sweetness’, anyone who’s made the effort to delve beneath the surface has been rewarded by a band that forever defy expectation, but remain reliably consistent.

While masters of well-crafted hook-ridden gems, for every festival banger are three more considered and layered moments; delivering 22 years and nine albums of substance that finds the perfect balance between articulate, thoughtful sensitivity, cinematic depth, and inescapably infectious pop-rock.

Their new album, Integrity Blues, is arguably Jimmy Eat World at their most ‘balanced’. The feel-good anthemics of single ‘Sure And Certain’ smacks of classic JEW, while record highlight ‘Pass The Baby’ is an expansive exploration of both kraut and post-rock before blossoming into an almighty riff-devouring beast. Then there’s the Van Dyke Parks orchestral grace of the title track, and everything in between. Integrity Blues very much seems to take the best elements of Jimmy Eat World to the n-th degree.

“Jimmy Eat World could mean a lot of different things song by song,” Adkins responds. “Going into making Integrity Blues, if a song needed to be heavy it's got to really go there. If it's going to be moody or more cinematic, why go half-assed? You've got to go all the way."

So would you say it's an album of extremes?

He laughs: "It's an album of appropriate expenditure of effort depending on the needs of the individual song."

That would look great on a poster…

"Ha! Yeah, put that on a sticker. So sexy, that will sell for sure."

But if there’s one thing Jimmy Eat World have never been, they would be the first to admit that it’s “sexy”. We meet the band in their London record label office, before they storm the intimacy of Bush Hall, playing to just 350 fans on their first gig of the comeback trail and kicking off what’s set to be a gruelling 18 months on the road. The lucky few in attendance aren’t here because of salacious tabloid nonsense or to absently scream at some chiselled Kerrang! pin-up boys. They’re here because they’re in love with a band who still give you so much to cling to. If they were “just that band that wrote ‘Sweetness’”, they’d have died long, long ago.

"We were just lucky where we happened to be at the intersection where opportunity meets preparation,” says Jim of their mainstream breakthrough with 2001’s Bleed American. “The place where we were coming from was a scene of like-minded bands helping each other out. That later got defined as something 'emo'.

“Now, it just feels good that anyone gives a shit about what we're doing. As a listener, there's so much competition and the most flattering thing in the world is that anyone takes the time to take your work and really sit and live with it, to build the associations that make it personal for them."

And there’s plenty for Jimmy Eat World fans to get intimate and personal with. The band admit that on the initial tour for their immaculate second album, Clarity, back in 1999, they would be lucky if there were 40 people in the room on any given night. With so much heart that it requires listening through a stethoscope, the adventurous and artful record would go on to claim cult status. Love behind the album accumulated to the degree that a decade later, Clarity would warrant an anniversary tour in 2009 – selling out The Forum in what was one of the finest gigs of this writer’s lifetime so far.

It was played in full alongside fellow landmark LP Bleed American, before follow-up Futures would later be given the same treatment at Reading & Leeds festivals. Some people hold a soft spot for Chase This Light, and it must be said that Damage is packed with memorable moments, but the point is that it takes a certain type of band for each record to carry such weight, acting as an entry point for strands of fans with different identities. Despite their knack of a banging single, Jimmy Eat World are an “albums band”, and each LP is a mark of personal development and a journey that their fans follow.

But where are Jimmy Eat World in 2016 (aside from joking about investing in helicopters after a recent endorsement from Taylor Swift)?

"I think we're in a really healthy place,” smiles Jim. “The album has a lot of nuances to it, but in a general way you could say that it's about how the best that any of us have at any given point is that we're all in a state of progress. Coming to terms with that, and being at peace in that, means focusing on what you truly control – that's your effort. The outcome is not up to you; it's a waste of time to take negative outcomes personally, and it's a waste of your time to interpret positive outcomes as anything other than what you should be grateful for.

“When you pin your sense of self-worth and your sense of happiness on 'finish line' type goals like validation or success, and take it away from what you can control, which is your effort - you set yourself up for disappointment. That can feel like a contradiction sometimes because you're like: 'I want this, this is what I need', and you're like: 'Is it? Is it really? What's behind that?’ The album Integrity Blues is kind of about exploring the real solution to those imaginary problems."

And I guess that's easier that that you're nine albums and 22 years into your career?

"Yeah, but we're comfortable in the sense that you've got to risk everything every time you set out there, otherwise we're not growing,” he shrugs. “That's what you have to do, otherwise why are you doing it?"

I come back to how much of himself Adkins puts into the songs. More personal than most, listening to a track like ‘Hear You Me’, ‘Night Drive’, ‘Just Watch The Fireworks’ or on the new record ‘You Are Free’ his writing often feels like an unfiltered channel of sentiment. I ask Jim is he ever feels vulnerable of ever being exposed to such a degree.

"No, because I don't care what people are going to take away from it. It doesn't matter, it's out of your control,” he admits. “Nothing that I say matters should matter. Think about any record of yours that is personal to you and why. No one's going to say: 'This record means so much to me because the artist was having a bad day and wrote this song'. It's more like: 'This song means so much to me because of this thing that happened to me'. That's the work done by the listener. That's the only way that anything means anything. What you bring to it yourself is what makes it special to you."

But it’s not all strictly matters of the heart. Just put on ‘Bleed American’, ‘Blister’, ‘Nothing Wrong’ or ‘My Best Theory’ for a blast of vitriol and evergreen youthful rebellion. For a band so emotionally direct, I’m curious as to how close they claim to waving their flag politically after living through the age of American Idiot and touring during the time of Trump.

"We definitely have political leanings,” replied Jim. “We show our political side more by the organisations we support rather than what we stand up and talk about."

Drummer Zach Lin interjects: "We have opinions and we have perspective but we try not to be the dudes who tell their fans how to vote. Jim's not doing political rants on stage..."

Jim raises his fist: "'AND ANOTHER THING THAT PISSED ME OFF ABOUT THE GOVERNMENT...'", before Zach shrugs it off: "But at the same time, we're not afraid of presenting an opinion. There's a fine line of presenting how you feel and suggesting that other people should vote and feel the same way. That's very presumptuous. More than anything, we just want people to be informed and vote which way they feel is best. If we were asked, we wouldn't be afraid to tell people."

I've spoken to a lot of UK bands lately that have found THAT while touring the world, they'Re pushed to explain themselves, the UK, and Brexit. Do you find yourselves as accidental apologists for anything in the US at the moment?

"Things like Trump?” replies Jim with a sideways smile. “This is our first time in Europe since Trump's campaign, but I'm sure it's coming."

Zach leans in: "It's an unfortunate development, but it's not our fault. I don't think anyone's expecting Radiohead to explain Brexit to the world?"

There’s a heavy pause while the band seek a diplomatic resolution before Adkins takes the helm. "Solutions are best come by through empathy,” he nods, clasping his hands almost presidentially. “Getting up, getting puffy, and telling people how it is just puts people on the defensive. You don't get to understand their position or where the real solution is moving forward. You're only winning over the converted when you get ranty."

Rants and banter are kept to a minimum as they return to the stage at Bush Hall that evening. Resplendent in black, the songs and energy alone carry them as they fire through a career-spanning, 19-song assault of hits, fan favourites, and future classics. Their idiosyncrasies shimmer above the surface of their universal charm as they do what only they can do best – free from gimmicks and driven purely by the compulsion to do so. But having only ever let the music do the talking, we ask Jimmy Eat World if they ever get frustrated by people totally misunderstanding the band?

“We've never tried to put out something that we're not,” Jim replies. “That's kinda worked in our detriment on some metrics of success. But here we are, still, after 22 years. It's kinda crazy. What you see is what you get with us."

What do you mean that it might have worked against you?

"Well, there have definitely been trends that are popular for a given point of time,” he gesticulates towards an era we need not give name to. “You can follow that and maybe catch a bump, but when opinion changes and that bump disappears, so do you. I guess in the short term it might have worked against us. We're fairly unrecognisable and there's not a whole lot of drama.

“It doesn't make for a very sexy story but 'cool' is an opinion and 'reliable' is a fact. Opinion is going to change and facts don't. I'd much rather be the reliable thing than the opinion."

Amen, and you can’t argue with the facts. Jimmy Eat World: the band you can trust.

Integrity Blues is out on 21 October on RCA Records. For information about their upcoming world tour, visit their official website.

From Whence Thou Came Thou Shall Retu...