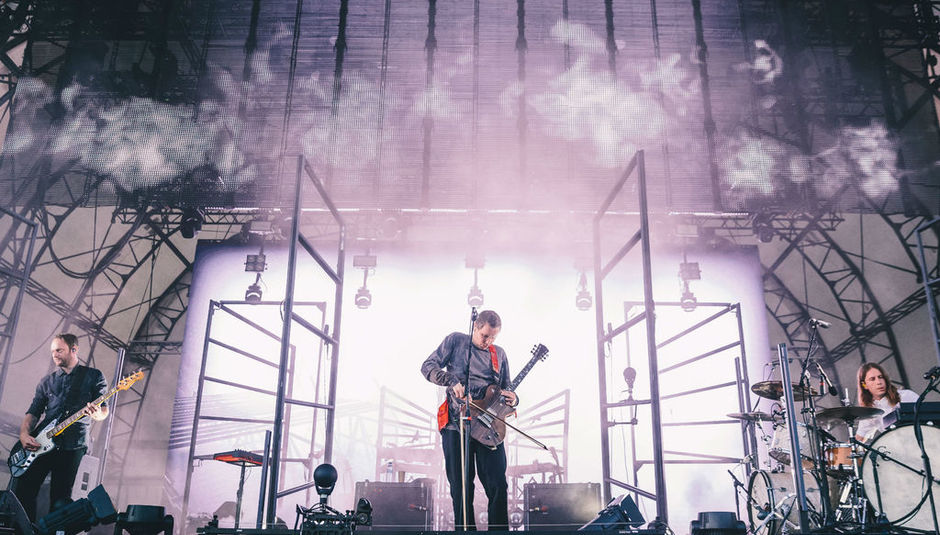 Cloudy, the weather forecast said, with a high chance of rain , and there were certainly points within the day when rain might have been preferable. Victoria Park’s lovely but the sun is unremitting, the shade hard-fought for: across the site people shrink into tiny islands beneath signs and under fences, skin glistening with sweat and sun cream, staring pityingly at anyone in jeans.

But hey, it could be worse - it could be Field Day, the sky biblical and the ground liquid - and the signs still affixed to the festival approach warning of the ‘extreme conditions’ remind us how lucky we are, how anomalous it is to be standing in a field in London in summer without crying.

Well, maybe there’s a few tears. Citadel has improved considerably since last year’s debut but those bar queues are still hilarious - snaking Alton Towers queue systems where in place of a roller coaster at the end there’s a £6.00 charge for a small bottle of Corona: it’s particularly ironic at a festival celebrating community and diversity, that the only people that can afford to drink are the rich. At one point we saw a guy knock his can with his foot, only noticing as the last of its contents seeped into the thirsty ground, and he looked broken.

But hey, that’s later. Our day starts with the bandstand and Chaps Choir, a horde of 60 singing men from Islington that produce a winning, lifting sound that drifts bucolically through the trees, a low-key contrast to the dust and desert of Tinariwen, their set a brief but sweaty whirl of headdress and rhythm. En route to the main stage we’re waylaid by Bring Your Own Brass, a London collective doing exactly what their name suggests but with such Siren efficiency that we’re trapped dancing like fools amidst the trumpets and saxophones and bandstand columns. The same space snares us again later for The John Langan Band, a three-piece that weld Gogol Bordello’s gypsy punk to a Scottish menace, the fiddle mesmerising and Langan himself a whirl of percussion and chords and whiskey vocals, as compelling a frontman as anyone we see today. It’s telling actually: Citadel’s organisers have assembled a bill from all over the world, but it’s this tiny stage led by local bands that repeatedly stands out.

Not that Cat’s Eyes are boring, of course: the swell and brace of soprano Rachel Zeffira’s voice opening their set is quite staggering, and the disarming blend of romantic soundscapes and The Horrors’ frontman Faris Badwan’s post-punk barbs hold the attention far more than anything from the latter’s day job. Calexico are fun too, the mariachi horns a fitting complement to our wilting beneath the sun, although it isn’t long before we have to retreat to the Sunday Papers Live tent for a cheery talk about our imminent financial and diplomatic collapse. ‘Brexit is a ploy by Citadel to make us drink more,’ one speaker concludes, at which we stare across to the nearby bar menu and shudder violently.

Shuddering violently pretty much sums up how we dance to Battles, flailing puppets to John Stanier’s beats, even if sound issues do mar the first half of their set considerably - Stanier himself rows with the sound guy repeatedly, channeling his frustration into an ever-more furious assault on his kit, whilst it takes until ‘Atlas’ until we can properly hear the guitars. From that point on though they’re incendiary, a hurricane of riffs and loops and staggering drums right up to a climactic, caustic ‘The Yabba’ - applause doesn’t seem enough for that ending, and certainly Caribou can’t quite follow it, their energy sapped by some drawn-out set choices despite a killer ‘Sun’ and ‘Can’t Do Without You’.

But enough about these mere pretenders - we’re all here for Sigur Ros, right? God, if only. This might be their only London show and their first since stripping back to a three-piece and going all-out on their visuals, but a shocking proportion of the crowd don’t seem to care. Part of that’s an issue with the programming, with every other stage shutting down to effectively corral people in here, but mostly it’s that London thing of rowdy chatter and indifference to musicians playing mere metres away - always enraging but particularly so when it’s a band marked as much by their subtlety as their bouts of caustic noise. It doesn’t help that the swinging chair ride positioned just behind the mixing desk has its own sound system, meshing ‘Óveður’s’ gorgeous ambience with a fairground dirge, nor that a significant number of the audience still seem amazed - angrily, in some cases - that a headline act wouldn’t sing in English.

It takes until ‘Ný Batterí’, halfway through, to find a spot where people are actually paying attention, meaning that ‘Starálful’, ‘Sæglópur’, ‘Glósóli’ and, most criminally, ‘Vaka’ are lost to the crowd (they do look spectacular though, even if the sky never quite darkens enough to fully take them in), but that point on it’s all good: sure, it’s a familiar setlist for those of us who pored over the Primavera Periscope streams and the Glastonbury iPlayer feed, but however high-resolution the laptop screen the reality of this experience is overwhelming, ‘Kveikur’ in particular scarring with its retinal burn of fiery imagery and seismic bass. But it’s the performance itself that really punches: far from losing potency in their more streamlined form, Sigur Ros seem invigorated, the paring back imbuing new life to songs that, in some cases, we’ve been emoting to for nearly two decades.

It ends, as it always does, with ‘Popplagið’, and there are still few pieces of live music more thrilling than when it breaks, the screens an epilepsy of Guantanamo strobe as Jonsi’s plaintive wails drown beneath Orri Páll Dýrason’s battery of drums and the feedback meshes with our own tinnitus and we’ve almost, almost forgotten the frustrations from the set’s beginning.

But that’s London’s fault, not Citadel’s, and as an attempt to do something a little different with the one-day format - to ‘celebrate the pleasures of a summer Sunday’, as they mission-statement - this pretty much works. Sure, it’s unabashedly, almost scrupulously middle-class, with its sit-down dinners with chefs who have names, its croquet field and its inscrutable, impenetrable theatre, but so is Latitude, and at least here we’re spared the schlepping out to Southwold. So yeah, roll on next year’s instalment, whilst we start the pre-drinking.

Tim Muddiman: The Journey To The Present