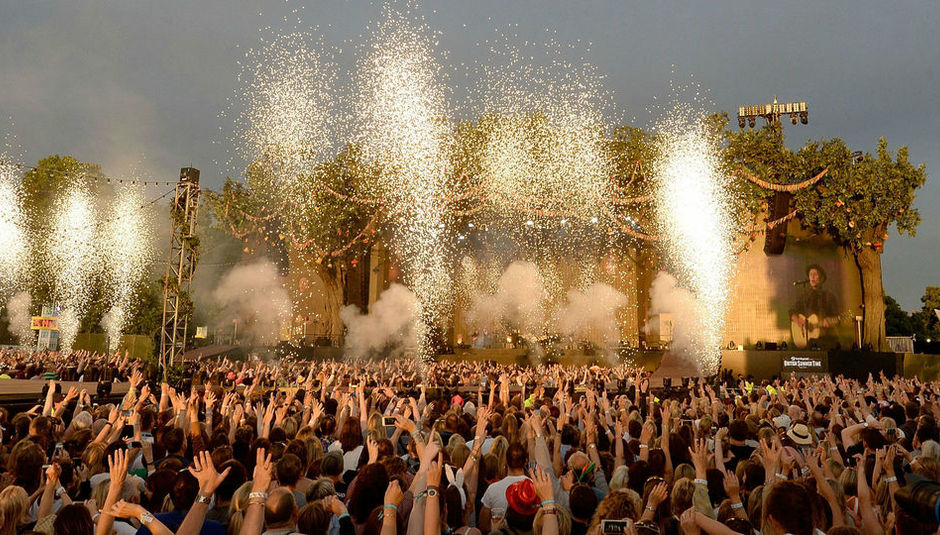 It’s a weird thing, seeing Take That as a 35-year-old recovering music snob. Back in the early Nineties, when they were at their synchronized-dancing-G.A.Y-baiting-knicker-wetting peak I was a 14-year-old intensely intense Manics fan. They were singing Barry Manilow covers, I was getting into Rage Against the Machine. They were dancing with Lizzie on TVAM, I was crying about Kurt Cobain. Back then Take That were everything that was wrong with music, maaaaan. Manufactured...urgh! Dance routines...yuck! Screaming girls...FUCK OFF! But age and nostalgia are marvellous things, and approaching these songs and these men just-shy of a quarter-century later is a very different experience.

The trio (it’s Gary, Howard and Mark btw, Robbie Williams is basically only a member when he feels like it, and Jason Orange wandered off a few years ago) and their stuffed bag of hits are so damned likeable. Even Tory-loving, tax-a-phobic man-plank Gary Barlow (OBE, obvs, with silver fucking crowns embroidered onto his shirt) is a warm presence onstage. Mark Owen is adorable. Howard Donald looks like someone’s loveable old dog. They’re extremely comfortable in their roles, extremely comfortable with their songs and utterly at ease with their place in the world. All three at various points claim to be awed by the 65,000 strong crowd, but you’d never know it from their easy stage manner. They absolutely own this event.

Thankfully they’ve also put some distance between tonight’s show and 2014’s disappointing III album, meaning they feel no responsibility to lean on newer songs and can indulge their audience in the hits they’ve paid to see. Tonight’s set features much of the smart, grown-up, Elton-meets-ELO-meets-Snow Patrol pop they’ve specialised in since their 2006 reunion (‘Shine’, ‘Patience’, ‘Greatest Day’, ‘The Garden’), as well as their less-successful attempts at a credible, dancey rebirth (‘Hold Up A Light’ and their recent Sigma collaboration ‘Cry’), though regrettably little from their genuinely brilliant electro-bonkers Progress album (represented only by a sadly Robbie-free ‘The Flood’). It’s all fine stuff, elaborately presented with huge visuals, pyros, confetti cannons, dancers and costumes. It’s also all very musically tasteful. Ever since an ITV documentary spurred them to reform ten years ago they’ve rarely put a foot wrong when it comes to crafting crowd-pleasing radio hits.

What’s nice, though, is how willing they are to abandon the good taste of their grown-up years and dig back into the shameless, cheesy disco-pop of their Nineties output. During 1993’s ‘Pray’, their first number one, Owen, Donald and Barlow slip into their old dance-routine, exactly as it was on the Top of the Pops of yore. They’ve still got the moves, but unlike the dancers themselves the routine has dated horribly, which accounts for the smile on Mark Owens face. They know this is funny, they’re getting as much of a kick out of it as we are. While ‘Everything Changes’ is reinvented as a kind of Motown stomp, ‘Could It Be Magic’ and ‘It Only Takes A Minute’ are faithful renderings, and ‘A Million Love Songs’ is the soppy school-disco slow dance it always was. The intervening years make the songs feel like old friends. It’s like going for a pint
with the school bully and finding out they’re 'not a bad bloke after all'. The world has changed into a bigger, scarier place, but ‘Back For Good’ remains.

Anyone hoping the special 'big gig' occasion would generate a reappearance by Orange, or even Williams himself, rumoured to be involved in their 25th anniversary celebrations next year, is ultimately disappointed, presumably the trio feel they can handle this on their own. We do get Lulu though, belting out 1994’s ‘Relight My Fire’ with some considerable power.

Proceedings close with rousing renditions of ‘Rule The World’, probably their sappiest moment since reforming, and ‘Never Forget’, the best thing in their arsenal. As Donald sings “soon this will all be someone else’s dream” you realise how wrong Barlow was when he wrote those words, all those years ago. Take That’s dream shows no sign of ending, they’ve become an institution, and I’m glad. Everything changes but them.

Manic Street Preachers in the Garden ...