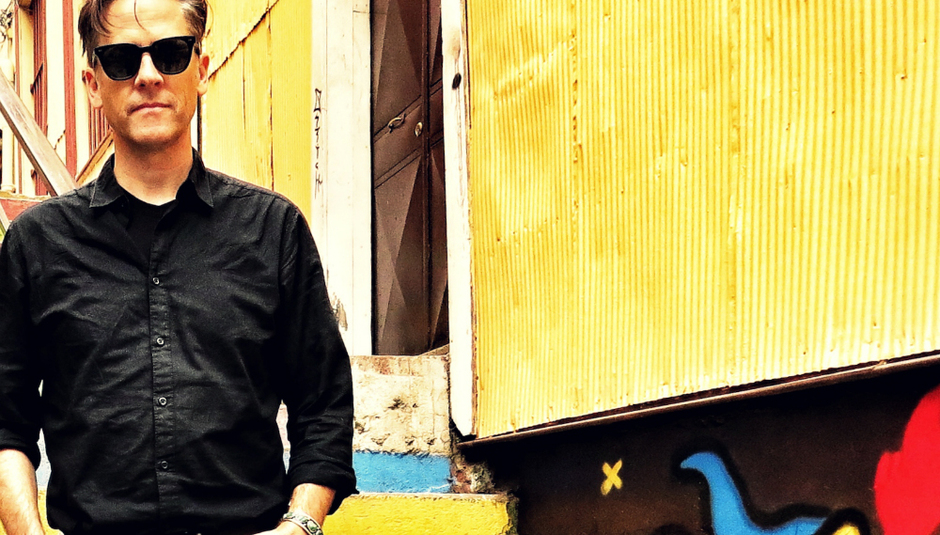 A guest blog by Joey Burns from Calexico with additional thoughts from John Convertino, about how being "on location" can inform the music making process, and also how it's often about the sensibility and space, rather than geography, that's important.

I've always liked traveling, even as a kid I loved piling into the car and taking trips with the family. Music was the soundtrack both at home and in the car. My Mom and Dad had some interesting records in their collection. They even made a point of bringing back albums and sheet music from their travels. I'll never forget when they returned from Acapulco and my Mom and Dad sat at the piano playing and singing songs like "Cielito Lindo" and "Cu-cu-rru-cu-cú Paloma". I could tell there was a story behind their experience and I suppose I picked up on that feeling and it influenced the direction I would take with music.

I grew up in Southern California. There was a lot of interesting music happening in and around Los Angeles and I played everything from garage rock and jazz to classical. It's hard to say whether or not the location had an influence on the music. I suppose it did. Maybe it helped me to be more open minded. My favourite local band was the Minutemen from San Pedro. In 1984 they released Double Nickels On The Dime which was their most eclectic batch of material. This album is by far my favorite and one I return to a lot. We even cover a few of the songs from this album in Calexico. The tune "Corona" is based on an interpretation of traditional ranchera fused with their style of punk rock.

When I moved to Tucson in 1993 I was excited to be living in a region with a mix of cultures and languages. The Sonoran Desert was the exact opposite in the spectrum of landscape to where I had grown up on the Pacific Coast. Nestled into some of the historic barrios and downtown districts in Tucson I felt like I had gone back in time - as if I had walked into a Cormac McCarthy novel. I picked up on the ghosts and loved the fact that time stood still. It had an impact on my writing which I've always felt had more to do with space rather than distinct geography.

It was a period when I had a lot more time to go thrift store shopping and as a result I wound up finding some influential albums. Some of my favourites were Duke Ellington's Far East Suites (1966) inspired by tour dates he had throughout the Middle East, the soundtrack to Tony Gatlif's documentary film Latcho Drom (1993) which featured Taraf de Haidouks from Romania, and Amalia Rodrigues' classic Fado album Cantigas numa Lingua Antiga (1977) which is still a staple at my home. I like bringing some of these threads into the fabric of Calexico. It's an instinctual approach backed up by the importance of feel. I suppose that a place can inform the feel and the attitude, and certainly when we travel on tour we pick up on those vibes and they can influence a show or performance.

When we chose to work in Mexico City for Edge of The Sun it was in hopes that we might capture some interesting moments in the demo making process and to spend some time in a place that we wanted to learn more about. One day we went to visit artist Pedro Reyes's studio while his team put the finishing touches on the 'Disarm' series. A friend of ours was working with Reyes to help build musical instruments out of broken pieces of weapons that the Mexican government has seized from drug cartels. We got to see the workshop and watch a rehearsal with local musicians. We even got to try playing some of these musical instruments fashioned from gun handles, barrels and clips. They are not easy to play that's for sure, but the symbolism and experience was truly impressive. Inspiring as our travels are, I still believe that it is the band members that have the greatest influence on the sound of Calexico, and that we will continue experimenting and coming up with new sounds from both the internal and external paths.

When I think about how locations influence or inspire music, two places keep coming up in my mind, New Orleans, and Tucson.

In the early 90's Tucson there was a studio in an old warehouse at the corner of 7th St, and 7th Ave, very close to the railroad tracks in the downtown area. This is where with Craig Schumacher, many recordings where made with various song writers, and bands, the first official Calexico record was done there, The Black Light. There was a transparency to the studio that was unlike any other recording studio, and it wasn't by choice, it was more by budget, but in the end we came out with some really beautiful results, that couldn't have happened any other way. Sounds of trains either barrelling down the tracks, or slowly beginning there journey made there way onto the recordings. Sounds of the street, car tires squealing, airplanes passing over head. At times even the wind rattling the doors, or blowing through the cracks in the windows. The drums were set up in a giant room where the air and the space allowed for full tones, I'm sure that space influenced the music we recorded there, and I think it's because it didn't shut us out from the city or the desert around it. Long summer days in Tucson, in the unbearable heat, before any one could afford air conditioning, or trips out of town, time would appear to slow down, long gaps of nothingness would inspire. Over the years it became our home, and where our hearts have beat the longest, and it's undeniable that it is an identifiable part of our sound, so much so, that it has become an inspiration to leave it.

Giant Sand set up camp in a mansion in the French Quarter, a studio called Kingsway. We recorded a record called Glum there. We were working on this song inspired by the Jerzy Kosinski book called Painted Bird, it was at this time in the 90's that the USA was involved in the Croatian/Serbian war, the book and the war and New Orleans were all up inside my head and heart and I started playing this beat over a riff Howe was playing on the guitar. That beat couldn't have come anywhere else but from deep in the ground, the streets that host so many a funeral parade, a celebration of life and death simultaneously.

Many years later Calexico would set up camp almost directly across the river in Algiers post Katrina, in a church that was devastated by her, and then restored to be a studio. Once again I found myself playing a beat that seemed to bubble up from the ground, in a room made of wood suspended off the ground, in a room that was allowed to expand and contract, like a breathing, living, room. I wasn't sure how I was playing the beat, and to this day I have to pause and sing it in my head before I can play it. I'm sure it couldn't have come from anywhere but a place deep down below the sea level, where the water of life can become a threat to your breath.

There are many places I think I would like to record, who knows what time and budget will allow, but in the end, if the inclination is there to create, it will happen wherever it can.

Edge of The Sun is released today.