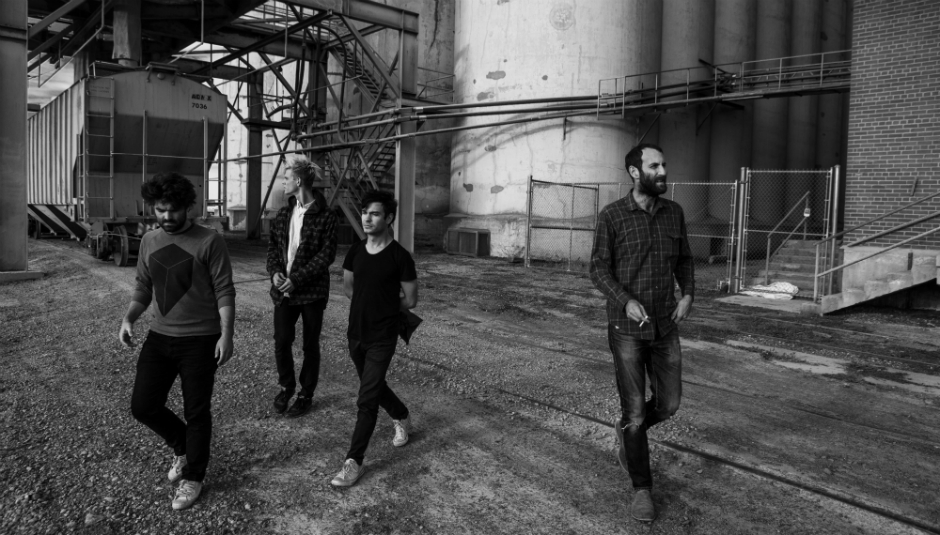 With Viet Cong, it’s inescapable. Death is what brought them together, it propels their relentless momentum and it’s the name of their debut album’s closing track - an 11-minute surge of ceaseless dissonance. So how about it then?

Christopher Reimer died on 21 February 2012 at the age of 26. He played in numerous bands during his all-too-brief life span, and was best known as the guitarist for Calgary art-rockers Women. Joining him in that raucous quartet were the brothers Matthew Flegel and Patrick Flegel, and drummer Michael Wallace. Matthew and Michael now make up half of Viet Cong, alongside Scott Munro and Daniel Christiansen.

Effectively, Women had split up long before Reimer’s passing. The group went went on indefinite hiatus in 2010 after an onstage fight at their show the Lucky Bar in Victoria, Canada. That was the point from which Matthew Flegel began to start again.

“A lot of the past couple of years has been recuperating through a lot of shit,” he says. “...I guess that’s where the life and death stuff comes from.”

Mortality is a big part of Viet Cong’s story then, but so is camaraderie. In the aftermath of Women’s demise, Flegel took some time off, wrote some songs and eventually rejoined his old friend Chad VanGaalen’s band on guitar with Scott Munro playing on bass. Known as ‘Monty’ to all his friends, although no one seems to know why, Munro actually replaced Flegel in VanGaalen’s band four years earlier.

“I knew Matt before that,” Munro explains. “My band Gunther used to play with his old band Veritas, which was exactly the same members as Women. We played a bunch of shows with them back when we were 21 and 22.”

The two bands used to play the same house parties at a friend’s mansion, featuring an Olympic swimming pool and tropical-themed atrium, with members would occasionally overlapping between groups. The way Munro tells it, he and Flegel weren’t that close until they went on tour together.

Then they started to think about forming a band together, just to open shows for VanGaalen and make some more money. Then they decided to (eventually) definitely get together after a late night of beers and smoking in Germany. Then Christopher Reimer died.

“I remember the week after his funeral we got together and were like, ‘Ok. Let’s actually do this now,’” Munro recalls. “When your buddy dies it kicks your ass into doing something.”

Both of Munro and Flegel were unemployed at the time, so they spent almost a month holed up together recording from 10 or 11 in the morning to as late as 1am. Demos for every song on Viet Cong’s Cassette EP and debut album, bar the blistering ‘Silhouettes’, were created during this frenetic burst of creativity.

“We kind of had a policy that we’d follow through everything and we still do that,” says Munro. “Any idea, however ridiculous, we’ll follow it through to the full conclusion, because you never know. When it gets down to tape, you can sometimes get some magic.”

From the desolate swell of ‘Continental Shelf’ to ‘Pointless Experience’s tribal stomp, an austere, incendiary sound was forged. Before those songs saw the light of day, Viet Cong decided to go on a 57 date tour around the US and Canada. Wallace and Christiansen had joined the band and Flegel wanted to see whether they could survive together.

“It’s a crazy thing to want to put yourself through,” he explains. “No one turned up, I wasn’t doing interviews and we didn’t have a record label.”

That’s not to mention the time he almost killed a man.

“We were in New Orleans and we’d done some mushrooms,” recalls Munro. “Me and Danny had at least, and Matt was tour dad that night, so we were like, ‘Let’s go to Bourbon Street and trip out on weird things.’”

“We were trying to find a parking spot. Matt’s a very careful driver, but suddenly there were these people yelling at us from the side of the street. He slammed on the brakes, Wallis jumped out of the car and some drunk guy had slipped on a pile of horse shit and had fallen over smashing his head on the pavement so it was literally behind the back tyre.”

“He was underneath the car.”

Eventually, the four-piece returned to Calgary in their Toyota Echo having caused no fatalities, and financed a fair chunk of the trip with the Cassette EP they’d thrown together. Despite its re-release last year by Mexican Summer, Munro wasn’t satisfied. Viet Cong were intact, but they needed to improve on their last offering.

“It was something to sell to people to keep gas in our vehicle and food in our stomachs,” he says. “I think that’s pretty obvious when you listen to it. It’s pretty scattered and all over the place, and not a cohesive record.”

From speaking to Flegel and Munro, you begin to understand their relationship works. On the one hand, you have an intensely thoughtful character who describes his favourite part of the recording process as “spending endless hours trying to find a synth sound”. On the other, there’s a more upbeat guy who’s prone to prefacing every adjective with ”super” and saying things like, “I’ve been in a lot of bands and this is my favourite one.” They compliment and bring the best out of each other, and that’s certainly the case with Viet Cong.

Thanks in part to Calgary’s near-eight month long winters, where snow storms keep you stuck indoors for days at a time, it’s an album that’s clearly been lavished with a lot of attention. Stray electronic hisses and fissures of static burst out from every corner of the record. Such is Viet Cong’s relentless pace, these brittle embellishments are almost lost in the percussive thrust. They ricochet outwards on repeat listens, showcasing the band’s incessant temperament.

No wonder they’re already well into the writing their second album. A process that's seen Flegel and Munro switching instruments to kick themselves onwards.

“There were plenty of songs where Matt would have a guitar part that I’d arrange for synthesisers," says Munro. "We’re figuring out if a riff sounds cheesy how would it sound in a cooler zone. Like how would it sound like on my favourite record?"

"We’ve talked about trying to go in with Geoff Barrow at his studio in Bristol. We’re all fans of those Beak> records, and I’m a big fan of Portishead."

For now, it's worth remembering what sparked Viet Cong into existence. The fragility of life is a theme that’s etched over their album’s lyric sheet. “If we’re lucky we’ll get old and die,” sings Flegel on ‘Pointless Existence’, while ‘Continental Shelf’ contains the equally bleak “When all is said and done / You'll be around until you're gone.” Death is something he’s come to embrace with an added dash of melodrama.

“I feel like it’s good for me to write about darker things and get them out of my head,” explains Flegel. “That keeps me more jovial as a human being.”

Catharsis has rarely sounded so good.

Viet Cong is out now on Jagjaguwar