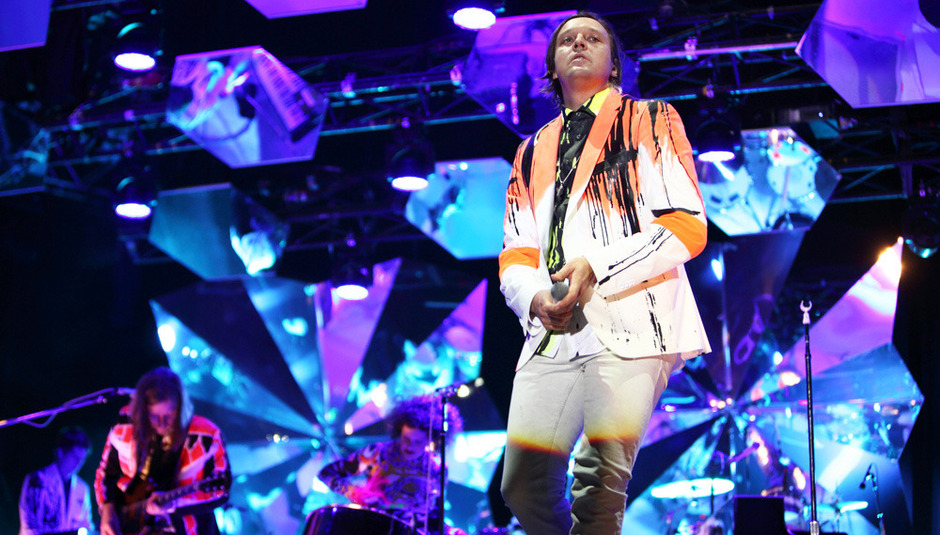 With arguably the most mouthwatering line-up of any festival this summer, Primavera Sound really does take some beating. Now in its fourteenth year, last week's shindig proved no different. Taking place between Monday 26th May and Sunday 1st June across six venues it's a boundary crossing concoction of musical delights fusing together the very best of all genres.

And unlike its UK compatriots, you can also guarantee the weather will be great. Or at least that was the plan. Unfortunately, Temples' early Wednesday evening set bore the brunt of the most hideous downpour, the aptly named 'Shelter Song' playing in the background as punters scampered for cover under any piece of canvas that remained vacant.

Heading indoors to the Barcelona Arts On Stage (known as BARTS for short) venue, DiS found ourselves in the presence of veteran punks The Ex whose rhythmic angular hardcore got the entire room busting moves aplenty. We also encountered arguably the most ridiculous bar system known to man, with drinks only being served once tokens had been purchased beforehand. However, what they failed to tell us were said tokens could only be bought in the foyer with re-entry into the venue itself only allowed once the band had finished! Anyway, back inside, Steve Albini's Shellac bludgeon away at the senses and we last three songs before heading across the road to Sala Apolo. Here, a two-piece by the name of Nina Coyote Eta Chico Tornado play unoriginal blues rock culminating in a pointless cover of Jimi Hendrix's 'Foxy Lady'. Normally we'd have left by now but this evening's main event are up next.

Revitalised and with album number 14 Revelation out earlier this month, The Brian Jonestown Massacre's set lives up to the new record's moniker. Meanwhile, pandemonium ensues out front with girls clambering to get on stage, one even knocking a disabled lady off her crutches in the process. She's promptly removed. Playing an hour long set spanning their entire career, it's 'The Devil May Care' and 'Not If You Were The Last Dandy On Earth' - both from 1997's Give It Back! - that prove honorable highlights here.

The following day we're greeted by glorious sunshine, and even the odd intermittent shower can't spoil the visceral thrill Dublin's Girl Band spew out. Think Mark E Smith fronting HEALTH and you're in the right ballpark. Earlier, Colin Stetson's inimitable presence and Follakzoid's psychedelic Can-isms provided the backing track to this balmy evening, albeit with the latter from the confines of the Parc Del Forum's all-seated Auditori.

We're so taken aback by Girl Band that we miss the majority of Pond's set to catch the Irish four-piece do it all again on the Vice Stage. Several Martinis later and it's left to Warpaint to entertain our slowly diminishing synapses. Playing a selection of songs from both 2010's The Fool and this year's self-titled follow-up, it's when they break out into a more loosely improvised segment during the second half of the set the atmosphere springs to life. 'Elephants' is still their most potent creation to date some six years on from its first release, while an unexpected cover of David Bowie's 'Ashes To Ashes' also raises a smile and several cheers in the process.

Future Islands may have recorded one of 2014's finest albums to date in Singles. Nevertheless, we're left a little nonplussed by their live show and head next door to the Vice Stage where local electronic duo Svper's blinding set made them one of our discoveries of the weekend. Back over on the Heineken Stage, Josh Homme and Queens Of The Stone Age roared through a near perfect greatest hits set only let down by an unnecessary jam at the end of 'I Wanna Make It Wit Chu' which seemed to last an eternity and switched a large portion of the crowd off in the process.

Arcade Fire also raised concerns for their Worthy Farm adventure in four weeks time. Not that there was much wrong with their performance, but more in terms of the lacklustre response from the audience. Particularly - and most surprisingly - for some of the older songs from revered debut Funeral. Nevertheless, Win Butler and co. seemed to be having the time of their lives on stage and a rousing 'Afterlife' - fast becoming the most enjoyable six minutes in their impressive canon - brought goosebumps.

"At least the rain has stopped and the heavens end" declares Loop's Robert Hampson four songs in to his band's set. Not that he had any reason to worry. Playing an exemplary masterclass in psych rock from way before the genre was even invented, epic closer 'Burning World' was a particular highlight. The reformation of Slowdive has undoubtedly been one of music's major talking points this year and their hour long set this evening proved nothing short of invincible. Watched by perhaps the Sony stage's largest crowd of the weekend, the vocal interplay between Neil Halstead and Rachel Goswell combined with the smimmering guitar lines and taut rhythm section of their co-conspirators was a joy to behold. With several tears being shed at various parts it would be difficult to pick out any one specific high point. However, DiS was grinning like several Cheshire cats when 'Blue Skied An' Clear' gives way to 'Souvlaki Space Station's unmistakeable dub-heavy bassline. Truly magnificent.

The less said about Pixies' phoned-in set the better, so without further ado let's talk about this evening's headliners instead. While Trouble Will Find Me still struggles to make any real impression on yours truly, there can be no underestimating The National's presence as one of the most exhilarating live bands on the planet. This evening is no different, with Matt Berninger in top form from beginning to end. With most of said album's best tracks dispatched early doors, it's left to the big guns from their back catalogue to demonstrate what a truly special band they are. 'Mistaken For Strangers', 'Abel' and 'About Today' all delivered flawlessly, while guest slots from Justin Vernon (aka Bon Iver) on 'Slow Show' and former Walkmen frontman Hamilton Leithauser on 'Mr November' only add to the carnival atmosphere.

Afterwards, we're torn in two by one of the worst clashes of the weekend. Factory Floor on the Pitchfork stage or Jagwar Ma in the Ray-Ban gulley? We opt for the latter and if the state of our mud spattered shoes at the end are anything to go by, aren't disappointed having danced ourselves silly for the entire duration of the set.

It's Saturday afternoon which means we've been here five days now and our bodies are suffering, big time. Over in the Parc De La Ciutadella Speedy Ortiz are playing their distinctive alt rock to a healthily appreciative crowd. However, it's over yonder where the real action lies. Take a bow James Graham and The Twilight Sad. Battling against looming rain clouds and still in tearful awe over the previous night's much-talked about set on the Parc Del Forum (which sadly clashed with Slowdive), he and his band deliver one of the most incredible shows of the entire weekend. Stripped down to just Graham on vocals, Andy MacFarlane on guitar and Mark Devine on keys and samples, the normally noise-heavy likes of 'I Became A Prostitute', 'The Wrong Car' and 'And She Would Darken The Memory' sound even more poignantly effective for it.

Back at the Parc Del Forum for the final day, Dum Dum Girls fail to ignite any sparks like they normally achieve on record, while Godspeed You! Black Emperor become something of an endurance test by the time the second hour of their set commences. So thank heavens for Trent Reznor. With all tour reports from Blighty being unanimously positive, his return to the festival arena with Nine Inch Nails doesn't disappoint here either. 'March Of The Pigs' sounding brutal as ever, 'Wish' also demonic, but its left to the closing couplet of 'Head Like A Hole' and 'Hurt' to illustrate why he's held in such legendary status.

The normally buoyant Foals seem fairly reserved by comparison, running through what's become a fairly obligatory festival setlist to anyone that's seen them in a similar kind of setting over the past twelve months. It's left to Black Lips to put us in the Saturday night party spirit, and they draw a huge crowd over on the Pitchfork stage. By which time an exhausted DiS is pining for some sleep, safe in the knowledge that Primavera Sound is still the greatest music festival in the world.