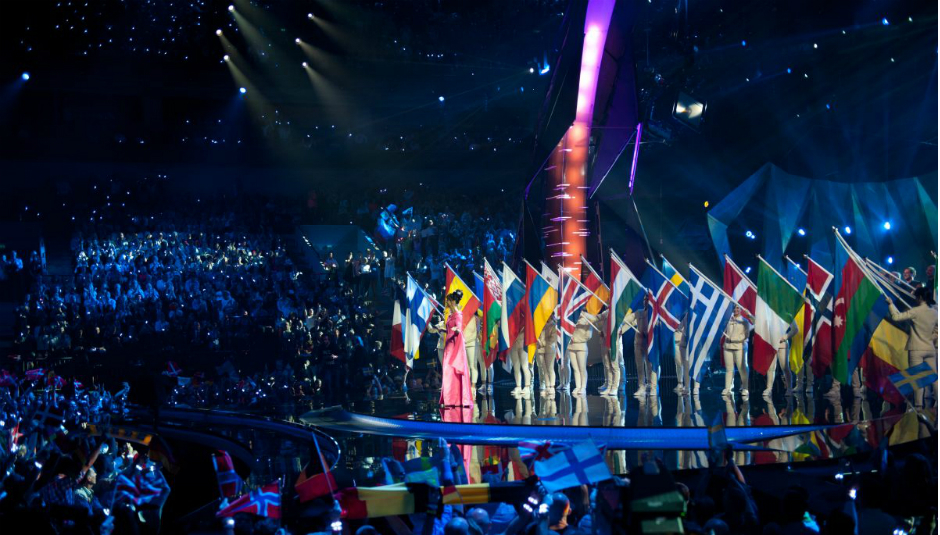 It’s that time of year again. The Eurovision Song Contest is back on BBC 1 this Saturday evening, and you will no doubt be watching it while inebriated. Because is there any other way?

To celebrate Great Britain's annual humiliation, chat through the possible winners and ask why Los Campesinos! don’t give it a go, we asked Rob Leedham and Derek Robertson to witter on about this year’s competition in Copenhagen, Denmark. Other more sensible guides to the action are available, although this is the only one that namechecks Godspeed You! Black Emperor. That’s all we do here at DiS, camp europop and pretentious post-rock…

Rob: So Derek, I assume you're all besides yourself with excitement for Europe's most prestigious gathering of new music talent this weekend. But enough about The Great Escape in Brighton, because we're here to chat about Eurovision instead.

Honestly, if I had to choose between an hour of Swans or the Russian Grannies from 2012, I'd pick those crazy commie breadmakers every time. There's just something endearingly awful about this annual farce of forced unity.

Derek: It's easy to sneer at some of the entries, especially ones from Eastern Europe and the Caucasus, but that's because there are some jaw-droppingly bad efforts every year (Poland, Belarus, and Georgia providing this year's most WTF moments).

I must say, I don't really share your enthusiasm for the Russian Grannies - as well as being God awful, everything about them - the song, the costumes, the fact they had a working bread oven on stage - smacked of condescension, "Look at the poor Russians! They can only eat bread! And sing terrible folk songs!"

Rob: Point taken, but the joy of Eurovision is in how its participants present themselves to the world. If a country thinks its best face is a tired stereotype, then I won’t feel bad about laughing at the insanity of it all.

Speaking of which… Great Britain. I love how we put out such a lacklustre entry each year and still expect to be rewarded with 12 points across the board. Like the guy who turns up to a house party and commanders the stereo to educate everyone about Godspeed You! Black Emperor.

Derek, you live in Amsterdam and are (probably) despised as a traitor by Nigel Farage, what's mainland Europe’s view of our piss poor effort?

Derek: There’s a general puzzlement that for a country famed for it's pop history and pedigree, we routinely offer up dross from wannabes, has-beens, and never-will-bes. Other countries call on the cream of their talent for Eurovision - last year's Dutch entry, Anouk, is practically royalty - and yet the UK asks… Blue or Engelbert Humperdink. And all this from the land of Dusty Springfield, Petula Clark, and the Beatles. It’s truly baffling, and we’re utterly deserving of low scores year after year.

Rob: But this time is going to be oh so different right? Molly has been picked especially for the competition with the help of BBC Introducing, thereby ensuring she's a 'credible' candidate or something like that. Anyway, her ballad is okay and we probably won't get nul points again. Probably.

Derek: Yeah, Molly is very photogenic, and it won't be a disaster. Hopefully. But it's all just so "meh". The song itself is ok, but it's all just a bland mush of the most inoffensive pop imaginable. Where's the bombast? The bulldog spirit? The - dare i say it - balls to show Johnny Foreigner that we virtually invented modern music and we damn well won't be shown up by a bunch of uppity continentals?

Rob: I get what you're saying about cajoling a star into appearing, but surely no one would be desperate enough to agree? Maybe Pixie Lott in two albums time or The Libertines if they're really hard up for cash after Hyde Park. I mean Hurts, Morrissey and Jarvis Cocker have all rejected invitations to represent the UK in recent years. Who can fix this for us? Come on Derek, the Great British public demand answers.

Derek: The fact that you think someone would have to be "desperate" to appear sums up the UK's problem with Eurovision - which is it's seen as a bit of a joke. Hurts would be great, Morrissey would no doubt shoot himself (and others) in the foot with that gob of his, and as for Jarvis? Well, whisper it, but his output post-Pulp hasn't exactly been amazing.

But surely we can find someone whose career is still on an upward trajectory who fancies a shot at glory? Just imagine how good a Eurovision the UK could host as well; we do pomp and ceremony better than anyone. If we could just somehow lose the stigma attached to it, it could be ours for the taking...

Rob: You're spot on there. Solve the stigma and only then will the viable candidates start to pop up. Us Brits love to wince along with Eurovision, but can't bring ourselves to actively engage with it. That said, the contest's limp voting system far outweighs any long-standing scepticism towards it. Great Britain will always struggle to win as we've got no borders with mainland Europe.

As for fixing it, I went to a chat last year at the Swedish embassy where The Spectator's editor suggested giving the contest to ITV or Sky (classic Tory), starting submissions with the song and then choosing its singer via a public vote. Because the X Factor-style format worked so well last time...

Derek: I'm not sure a public vote is the answer. After all, it only takes two idiots to outvote a genius... but then the Swedes manage to engage the public and not end up with some terrible, novelty act. If only we could be more like them, eh?

But seriously, all thats required is someone at the BBC with a firm grasp of a) music and b) youth culture - a long shot, I know, but bear with me - to revamp the selection process, and then regardless of how we actually do, we'll have entries that we can be proud of.

Robert: I think we just need to find a decent act with nothing to lose. I’d love to see a band like Los Campesinos! or Franz Ferdinand do it - an act that epitomises British indie. What worked for Lordi could well work for the UK, but it's never going to happen.

Derek: I like those two suggestions, and we should be thinking along those lines. Perhaps having someone other than Graham Norton's camp buffoon as compère would also help raise things up a notch; if the presenter can't help but make it sound like one big joke, what hope is there of people taking it even semi-seriously?

Robert: Well, that kind of talk is too late for this year’s final. Have you heard to this year’s lot yet? I’ve got a soft spot for Italy’s power-pop effort.

Derek:I did actually listen to the entries the other day, and there is noticeably less of the bonkers, bizarre, and downright awful; most of it sounds exactly like the stuff that's in the charts these days i.e. the type of music that some people still actually buy in single form.

So perhaps all is not lost? Either way, if you wanna see how it's done, look to the classics - it really doesn't get any better than ‘Waterloo’. Watch and learn people, watch and learn.

Robert: It’s good, sure. But does it beat a bunch of German cowboys chanting “wadde hadde dudde da” over and over again? I do not think so. God bless Eurovision, eh?

Eurovision 2014 - join the discussion on our DiS Social messageboard