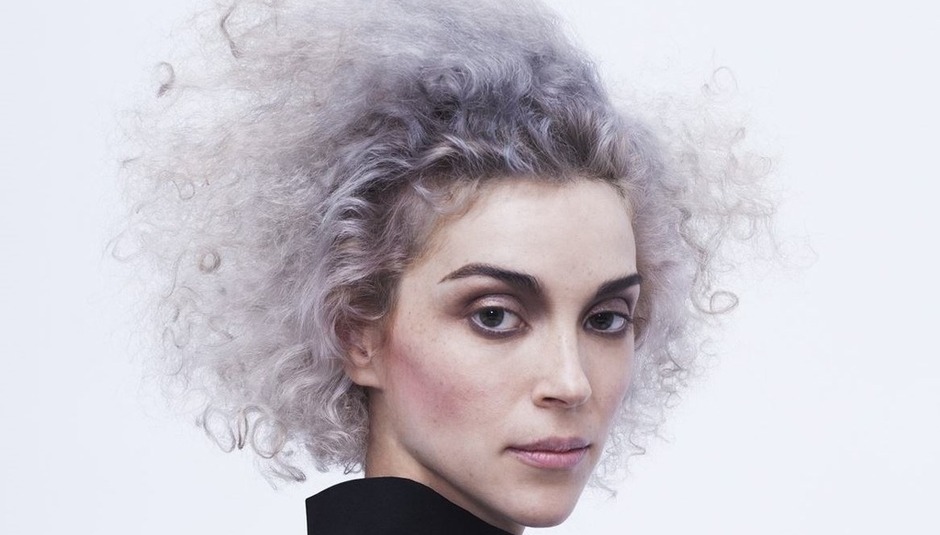 OK, so first things first: before this week, I'd never really heard much of St. Vincent's music, and had to do a hilariously last minute scramble via YouTube to mask my incompetence before attending tonight's gig. Y'see, I was a last minute stand-in for another of DiS' Manchester based minions, so armed with nothing more than a £4 can of Red Stripe and an open mind, I stood alone, a little daunted, in the grand setting of Manchester's imposing Cathedral whilst the lights dimmed and a robot voice told us to turn off our phones and enjoy the moment.

And can I be honest? I'm really, really fucking glad I came. I'd attempted to get into St. Vincent's music around the time of Actor, but for whatever reason, just couldn't seem to crack the veneer of that record, so gave up. Now, I was confronted with an entirely different beast altogether - the digital, synthy upgrade of Annie Clarke, full of razor sharp arpeggiated synths, blissed-out washes of ambient noise, hilariously over the top snares and kicks, choreographed dance moves, lights, noise, riffs, podiums... and it goes on. A sensory overload for the uninitiated (like me), I let the pure pop hooks hit me left, right and centre - and when you do, when you let it in, it's absolutely wonderful.

Throughout the set, all I could think of was that it was so good, so refreshing, to see someone give so much of a fuck about performance. There's Annie, dressed in a striking fluffy dress, striding atop a podium, unleashing some bludgeoning Wes Borland riffs. Then, all of a sudden, she's writhing around on the floor to an ambient synth jam and swirling orange lights. Then on the next song, she's up again, shredding a long lost Marnie Stern guitar tutorial and pulling some fantastically jagged shapes like it's nothing.

Her melting pot of influence takes in everyone from collaborator David Byrne's lyrical and vocal dexterity, Devo's inch perfect pop hooks (and penchant for on-stage dance routines), the aforementioned guitar histrionics of Stern and Borland, and the likeable nerdiness of 80s alt pop wunderkind Thomas Dolby. That said, at points, her art school pomposity gets the better of her, and her almost-spoken-word-poetry masquerading as mid song patter falls a little flat with tonight's audience, who question with some volume as to whether or not she's high on more than one occasion.

There's an awkward silence, and the lights go off as she thankfully moves on at breakneck speed into the rest of her neon pop wonderland.

New songs 'Digital Witness' (which opened tonight's proceedings) and 'Birth In Reverse' both sound big, brash and playful - Annie's burning hot guitar buzzing and cutting through the booming reverb generated by such a cavernous venue. As onstage setups go, it's pretty small - made up of drummer Matt Jonson and the duo of Daniel Mintseris and Toko Yasuda, alternating between guitars, synths, laptops and at one point, a theremin. Hunched over desks of gear echoing a 70s sci-fi sequence, they provide the requisite backdrop with icy precision - there are no wasted notes, no fluffed lines, nothing out of place. Ironically, it's this perfection that allows for Annie Clarke to let loose her imagination and try to quash her restlessness - charging around the stage, stomping, dancing, pirouetting with reckless abandon.

In retrospect, I got schooled big time this evening. For me, it wasn't so much about a gig, or a show, but more a sustained example of what an idiot I'd been to not dive into her resolutely and unashamedly batshit world until now.

Bryce Dessner of The National on his ...