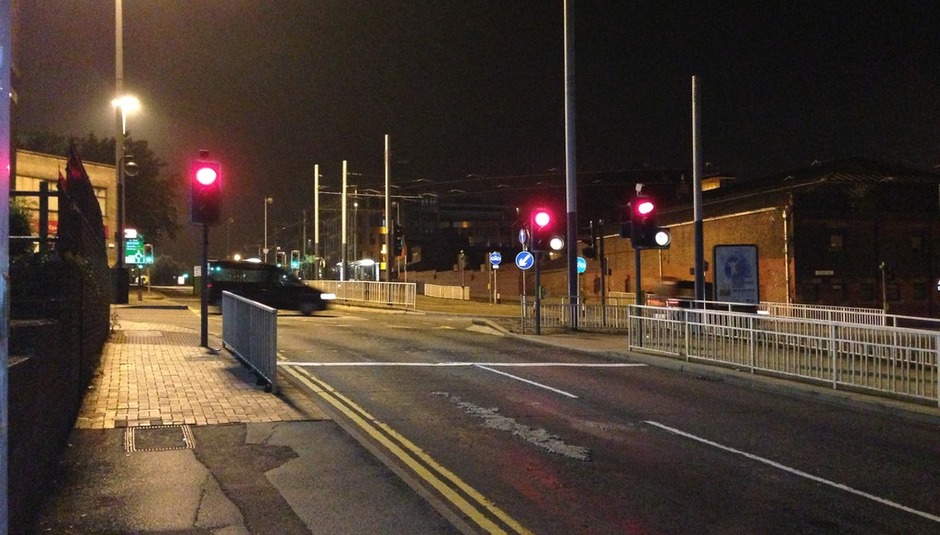 Sorry, it's been a while.

Got to be honest, it’s been a bit of a blur since you last heard from us. We think we caught fresher’s flu some time in late September and never quite recovered until this weekend, which was spent sitting on the sofa surrounded by empty Lemsip sachets and Seinfeld DVDs. Sniff.

A couple of things happened in October, we think… Yeah… Toucans released a tape called Welcome To Lovers House and it was a trio of weird, melancholy, garagey anti-pop songs. Brilliant it was, and you can still get it on Bandcamp. It was followed a few days later by Corner Control, who are two guys that met at the University of Sheffield’s Small Ideas alternative music society and made an EP called, er, EP. That set of clean-cut minimal techno was an insanely sophisticated release for two guys just starting out. It even came with a zine, and some cool-looking visuals on Tumblr.

November was all about the long-awaited debut single by Blessa, who continued their consistent bettering of themselves with ‘Between Times’. Part Cocteau Twins, part My Bloody Valentine, perfect, dreamy, bittersweet pop. It was on the radio and everything, and word is they’re doing an EP with MJ off of Hookworms, who’s recorded every great new band in the northern hemisphere.

One of Blessa even got to talk to the bigger boys at the Guardian at the end of the month. The article in question was about how now, believe it or not, there’s some bands in Sheffield that don’t sound like Arctic Monkeys’ eight-year-old debut album. WHO KNEW, RIGHT?

Abe released an EP at the start of December called Heave-Ho. Polished? Yes, but texturally interesting, atmospheric and conceptually ambitious too. More Best-New-Music-on-Pitchfork than THREE-LADS-FROM-THE-STEEL-CITY, and we sure ain’t complaining. They share a certain aesthetic with the altogether funkier, Foals-ier Tropic Of Youth who released their single, ‘You’, a few days later. Between them, Abe and Tropic Of Youth (not to mention the all too mysterious Blossomer) are adding sophisticated flickers of seduction and intrigue to Sheffield’s music scene, in a way that makes you think they might actually end up being quite famous. Or maybe Record Collector has just started stocking Prince vinyls.

And of course there were Christmas songs. One was an instrumental which the ramshackle, 60s-obsessed L'Amour Des Rêves contributed to a compilation for their Mancunian mates PINS. Another was the stupidly, fantastically festive ‘When Christmas Comes’, which saw Best Friends shrug out of their surf-pop pigeonhole and continue building on the promise they’ve long shown as they prepare to make their debut album. The latter was released as a double A-side vinyl with Seize The Chair, who contributed the frantic, post-punk awesomeness of ‘I Just Want To Sleep’ to the release. STC do our head in because they’re fucking amazing, and this was only their second release in two-and-a-half years. Sort it out, yeah?

Think that brings us up to speed. Wait, no. Something else is coming back to us… Oh god… Yes… This 141-second video from November by Temple Of Coke. Behold ‘UK Garage Rock Medley’. Oh yes.

Okay, so what now?

Looking now at the year ahead of us, and there’s already some confirmed album releases to get very excited about. First up is Algiers, who’ve been teasing us with sporadic live shows since they released their Four Priests EP in late 2011. Now they’ve got an album: it’s called You’re The Captain, it’s out on January 27th, it’s being released on Xtra Mile Recordings (home of frontman William Anderson’s old band, Dartz!) and it’s going to be as dynamic, intricate, sensitive and ferocious as we’ve always suspected the emo-influenced two-piece could be. Watch the video for ‘Lighthouse’ below, get the single, ‘Mother’, on February 3rd, and go to the album launch at The Harley on February 1st.

Jim Ghedi is an interesting guy. His debut album is a doubler called Satori, and it promises to bring together free jazz and experimental folk in a fascinating way when it comes out in February. This is a singer/poet/songwriter who casts his gaze far beyond the Peak District, to the forgotten corners of Earth’s musical landscape. Or something. We might actually be in over our heads here. The preview video sounds like A Hawk And A Hacksaw with a Yorkshire accent, which is great, and the record features lots of Sheffield artists we like including Blood Sport, Screaming Maldini and the Purgatory Players. Quote for the press release? “IT’S GOING TO BE REALLY GOOD.”

We finally caught Brazinskas opening for Future Of The Left at Queens Social Club back in November, and they were absolutely class. Rapid fire two-piece garage punk that owes as much to Brown Brogues as it does to The Stooges. Now they’ve unveiled ‘Jesus HD Christ’, the lead track from a tape they’re releasing on February 1st – grooves, breakdowns, loads of distortion, a dude skateboarding on a pizza for the artwork and the best song title you’ll hear all year. Promise.

If February still seems a long way off, the debut EP by Radical Boy, due out on Monday, should tide you over. Smears was produced by Best Friends bassist Ed Crisp and is being released on Crumb Cabin, which means there'll be a lovely zine to go with it. The songs themselves are pretty frickin' exciting, whether it's Dinosaur Jr-does-The Breakfast Club on 'Moving Front', the ruthless rasps of "I hate school / It makes me sick / But I have to go" on 'Toxic Mud', or 'Butt Crisis', which is called 'Butt Crisis'. Oh yeah, they're also absolutely nuts live and, like, nine-years-old or something.

Nai Harvest have been busy touring the world and reclaiming the word ‘emo’ for people who know it’s about Sunny Day Real Estate and American Football, not My Chemical Romance and Panic! At The Disco. They’ve got a new EP, Hold Open My Head out on March 3rd and the title track is one of the more reflective tracks the pair have produced, while staying true to emo’s twitchy punk rock roots. Your parents won’t ever listen to them, but this is a band that seems to be turning into a pretty big deal in their corner of alternative rock.

You may also be aware that Sheffield’s new pop poster boys The Crookes are releasing their third album, Soapbox, on April 14th. Last year’s standalone single, ‘Bears Blood’, was, we reckon, the band’s best to date, so we’re pretty excited about the new record. As well as announcing the album details, this week the band also released a video to a track from it, ‘Play Dumb’, in which the sexy singer man gets turned into a sexy singer woman while a super catchy riff gets stuck in your head until the end of time.

So what should I do now?

See below for your usual selection of cool gigs, including the welcome return of some local favourites like Oxo Foxo, The Purgatory Players, Che Ga Zebra, 65daysofstatic and Drenge. There’s also some decent club night coming up too: Offbeat continues its comeback on February 7th, but the week before that there’s a night launching at The Riverside called Mess Your Hair Up. There’s a Facebook event, obviously, with a list of great bands that might get played, and some other bands that might get played such as Haim. The interesting thing is it’s been set up by Semi Detached, who for the last year or so have been putting on some of the best gigs in the city. Worth a look, no?

Okay, but then what?

So Tye Die Tapes is run by some guys from a band called Collider, who we’ve covered here a bit before. But now James from Collider has another band called Warmhammer, featuring members of Toucans and Blood Sport (although the guy from Blood Sport might have left… we were in the pub… there was wine… who knows what he told us?) All the while, the other three from Collider have a band called Swordface. Both are satisfyingly lo-fi, with Swordface on the mathier side of slacker rock and Warmhammer at the more laid back, heartfelt end of the spectrum. Each have their own demos on Bandcamp.

White Bear come from a similar musical tradition, with more a skew towards Slint and all sorts of excellent nineties emo. They’ve got an EP called Fever on their Bandcamp – it’s a little hazy around the edges, but these guys know their way round a coda.

You want more emo? Okay, how about O Captain.They’ve got some demos from last summer on their Bandcamp, with intricate lead guitar, pinch harmonics and aching vocals that make us want to dig out our old Victory Records compilations and go to Friday night Corp for a cry.

Sly Pariah are worth a shout too, if a drugged-up, janglier My Bloody Valentine are your sort of thing. There’s a handful of demos on their Soundcloud.

Finally, The Hipshakes, who are from down the road in Bakewell. They’ve been going for years but they do have a new song called ‘Bevo’, which sounds, as the title suggests, like Devo. Enjoy!

Email me your music at robertccooke@gmail.com or find me on Tumblr and Twitter. Facebook messages are for organising trips to the cinema, and occasionally to Street Food Chef.