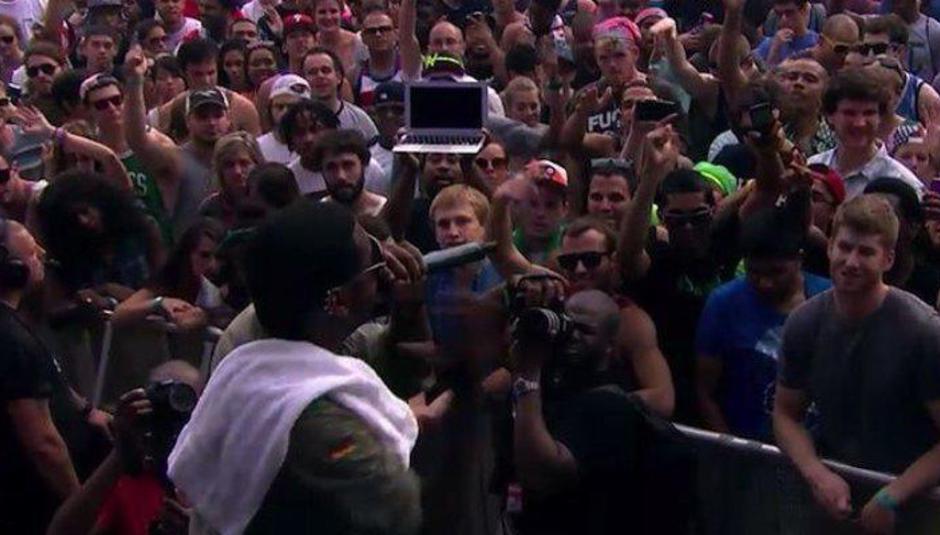 There was a time when bands just wrote music and played it. Sure, occasionally they’d take drugs or throw an appliance out of a hotel window but essentially their role was simple: to make music. Once they’d got a set together they’d use all their energy, originality or even musicianship to get people into it, whatever the cost. If enough people got into it, they might make a record, and if they turned enough (or at least the 'right' heads) they might even get on the radio.

On the flip side, the fans would be scouring the music press to see what gigs were coming up next month. They’d buy tickets in a “record shop” and get to the gig early to get pissed outside. By the time they got in and lost each other in the dark, they wouldn’t care, they'd find each other later and in the meantime, they’d dance their hearts out and exchange grins (and sweat) with strangers while the band played like their lives depended on it.

Like a tidal wave, no, a tsunami, something unusual happened which triggered a ripple. This ripple became a gentle swell and then before you knew what was going on, everything which anchored you and “the scene” and everything that made it special was gone. The excitement, the anticipation, the bands’ enigma - gone. The hunt for that rare import, the bootleg live tape, the rare glimpse of a band on TV - gone. The overly officious bouncers, the scary guys in the queue behind you and the jaded punks behind the bar - all gone. All pushed aside, crushed and splintered by the enormous oncoming surge.

It was my generation that watched it happen. We stood by, mesmerised at first by this tremendous new thing rushing into every facet of our now digital lives. Within a year it went from being something you’d heard of to the complete synopsis of your whole existence, the medium of interaction with every family member, friend, ex and random person you chatted to once at a work thing. It replaced word of mouth and the music press in one fell swoop. Now, as the wave continues churning up everything in it’s path, the aftermath is laid bare and the reality dawns. We stood by and did nothing, or worse, we took part...

There’s no need to ask someone how good the gig was because you already know. You saw blurred photo after blurred photo on their “wall”. You saw the flash reflected images of the backs of the hands of the person in front, clinging tightly to their phone to capture the exact same image on the new Samsung or (OMG what a loser) an iPad. Maybe even somewhere behind the sea of hands and lenses, like lost boys in the forest, you could make out the image of the band themselves, blurred and hard to identify but definitely there, “So close!”. Perhaps as they tell you how good the gig was, you point out that you already know but they carry on anyway. You also know who else was there and what those trendy blogger-types thought about it. You know the band had a “rad night” cause you saw it on their timeline but the truth is, you also know the reality, which is that the venue was half full because it clashed with ‘The Voice’, that while the musicians went through the motions on stage, the audience was attentively updating others who weren’t there, on what it was like to be there... The truth is that the atmosphere was average because no-one could see the band for camera phones and you could barely dance for fear of nudging someone. Someone else with a better view, a better camera and consequently a better photo had got way more likes than yours on Instagram. And while it shouldn’t matter, it distorted your memory of the gig, which is now reduced to a series of images caught in the shit photos and maybe an abysmal live clip that’s too distorted to share but you’ll upload it anyway.

So complete is the victory of the Social Network that no one even questions it anymore, besides maybe clicking ‘like’ on another “Big Brother” privacy scare before it slips off the bottom of their timeline. Facebook is the necessary glue that binds us, it’s the vernacular we use for interactions and it’s the conduit between bands and their fans and more importantly fans and their mates. Instead of a band warming up or getting wasted before a gig, they’re posting painfully forced and filtered photos on the net for their “fans”. They too hope they get lots of likes and this causes them to go to more and more pains to post the right shot at the right time. To appear at once aloof and connected and to give the impression that they don’t care, despite the fact that everything they’re wearing is carefully contrived and statistically likely to pickup more likes from the mates of their fans.

Like a popularity contest for adolescents, bands now compete for those likes, those clicks and best of all, those comments and wear those figures like a badge on their digital sleeve. “Woohoo three more likes to reach 1000!” The bands need them because it’s a means of gauging how well they’re doing, “in the scene”, it improves their chances of getting a better gig, or perhaps with enough cajoling and forced clicking, even some radio play. Unfortunately, by now everyone has lost track of what this was all about, what the purpose was... these “likes” aren’t a reflection of the band’s music or integrity, they’re a reflection of their social media skills and little more. Perhaps if they’re really switched-on, they’ll be paying a percentage to a publisher to be savvy for them, posting just the right type of “content” with appropriate comment inducing language at exactly the right time of day...

Is this still about music? Why should anyone care what the sunset looks like from where the band are sitting or how popular their banjo cover of that Kendrick track was? Behind the scenes, vast warehouses crammed with marketing databases amass and cross-reference all these interactions. They store data about you personally and the way you interact online, with whom and when and who they interact with and how and when and what they like and what websites they visit and what adverts their eyeballs are most likely drawn to, which images and words are most effective to get that person to click on an advert, enter a competition or like an affiliate’s page in return for an mp3.

So are the band writing music? No, they’re arguing about photo-shoots, because someone told them that photos are the best way to get the most clicks if they post them at 10:25am on a Thursday.

Are the fans excited about the upcoming gig? Not really. They’ve already seen the fuzzy pictures and the set list from the night before and let’s face it, they know exactly what it’ll be like.

Are we all guilty of handing over something as precious as our enthusiasm to a bunch of geeks who are selling it click by click to anyone and everyone prepared to pay for it? Yes.

We can stop anytime we like but the bands are held to ransom, they’re stuck. They have to keep their fan’s attention online, even when they’re offline working on new music. If they stop posting, they slip off the radar and the Social Network has no use for them. It hides what they do post from their own fans, unless of course, they’re willing to pay for it...

Perhaps for the next gig, we should all leave our mobiles at home?

Previously: Modem Life Is Rubbish: Unplug To Save Your Love Of Music