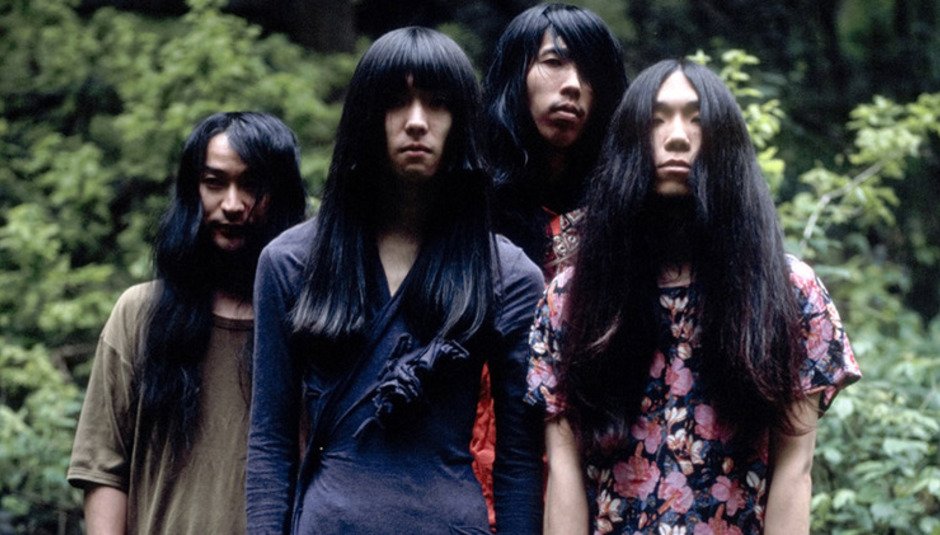 Masses of black hair headbang in mesmerising motion as a psychedelic beat throbs out in a manic machine-like fashion. From playing shows in grotty east London pubs to supporting The Horrors, in four years Japanese four-piece Bo Ningen have rightfully earned themselves a reputation as being one of the best live bands around.

Last year, the release of their self-produced second album, Line The Wall, finally captured the ferocity of their live show on record. Unlike their debut, from the outset of opener 'Soko' the record is swathed in lustrous layers of reverb, howls and most importantly unwavering intensity.

We caught-up with Bo Ningen singer, Taigen Kawabe, to talk about the importance of pushing the boundaries, the art of collaboration and why you should borrow your mum's clothes.

You released your second album, Line The Wall, last October. What does the title mean?

Your debut album was recorded live, whereas this record was properly produced. Why did you decide to not record live this time?

Our first album was quite straight forward compared to what we do nowadays. Before we recorded this album we thought that we should go to the next step, which is adding something new, something that you can’t get from the live experience...We can put on a good production in a way that you can’t do live...

You're renowned for your live performances. What’s your objective when you play live? What do you want to get out of it?

Each of us has different stuff we want to export, but for me I want the audience to feel a total experience. Everything live is different for us as well, it’s quite surreal. It’s me on stage but a different side which you cannot really express in your real life – it’s a sense of purification almost.

You started out by playing a lot of gigs in east London. How do you think that’s informed how you play live?

We played the Vice launch party in 2008/9 - it was a hard time to play in front of hipster east Londoners - it was a bit different, as before we were kind of free-form music. Some people listened to us there and thought ‘interesting’ and before we weren’t interesting to anyone.

Also, we realised that there was something about us that can appeal to different kinds of people, as at that show there were fashion designers and artists that found us quite interesting. It felt like that we were breaking the boundaries. In Japan it is quite hard to break the boundaries of the industry as music, fashion, and art are really separated, whereas in London we felt like we could break it a lot easier.

You’ve supported a diverse range of bands including The Horrors, Guitar Wolf and British Sea Power. How do you pick who you support?

You were interviewed by artists Tim Noble and Sue Webster and they created a short animation using hair that you'd given to them, which you then went on to soundtrack. How did that come about and what was it like?

You also collaborated with Martin Sexton as well. How important is the world of art to you?

As I said, we’re interested in breaking boundaries and we want to collaborate with really different people, but obviously the artist has to be really interesting and attractive to us. We have to keep doing it because that’s one of the advantages of being in London as there are more opportunities to collaborate with different people, and when we do improvisation it might change our direction.

You collaborated with Damo Suzuki is there anyone else you’d like to collaborate?

Obviously, that was wicked. We’ve played with him four or five times now and it was amazing. In Japan we collaborated with one of the Japanese Idol contestants; Japanese idol contestants are intense about their performance and the way they perform is really full-on. We feel that some of the bands in the UK are too laid back, but the attitude of Japanese idol was more extreme.

People are quite fascinated with the way you dress, in particular your hair. How did your 'look' come about?

We never discussed about the concept of how we look, it kind of naturally happened. When we met, our drummer was the only one with long hair, but we grew our hair without discussing it. How we do the costumes on stage is totally up to each individual - we never talk about concepts, we just wear what we wear. Personally, my Mum was a folk singer and she has so many types of different stage costumes and I like creating a look using those clothes - I want to wear them without any kind of meaning. Those kind of costumes I don’t want to wear in daily life; it’s to take it away from real life so the audience can feel more surreal and away from their real life too.