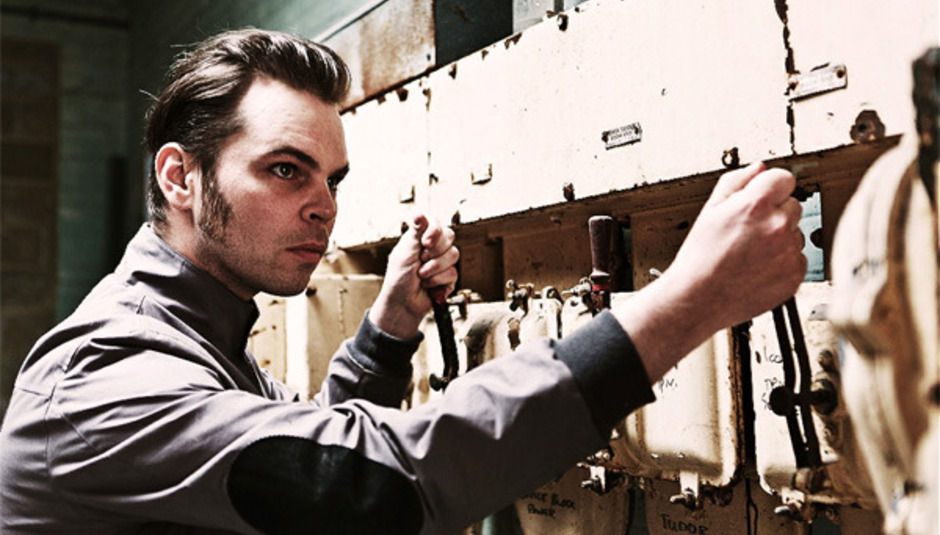 I’m talking to Gaz Coombes on the phone, meaning I can’t see him. But that’s okay, because my imagination has handily sorted me out with an image.

Wherever he is, he’s sat there with massive sideburns and is definitely wearing a white t-shirt that says “Gaz” on it. Obviously this shouldn’t be the case - I’m fully aware of Gaz Coombes, 36 year old solo artist, one-time frontman of modern glam institution Supergrass, and penner of a string of increasingly sophisticated pop-stompers reaching from 1994 right to this years’ genuinely excellent Here Come The Bombs, so I shouldn’t be picturing him as he was in pop video from the summer of 1995, especially as I actually met him last year, and he was most definitely not dressed like a britpop teenager. But then, like most people, I first stumbled across Gaz when he was sat on a wheelie bed in the ‘Alright’ promo, and the image embedded so deeply I’ve never quite shifted it. Thing is, I’m actually half right. The sidies are still there, and a bit more trendy now thanks to furry-cheeked cycling ace Bradley Wiggins, (“yer, his are bigger, but I bet I’ve had mine longer” says Gaz, who has indeed sported curly chops since he was 14.) The face fuzz is pretty much the only thing that’s stayed from the cheekie-chappie years though. Nowadays Gaz Coombes is a grown up artiste and he means business.

For a start, he did pretty much all the legwork on his debut solo album, self-financing and playing most of the instruments himself. Though that wasn’t the way it was supposed to pan out, “I’d planned at the beginning to collaborate” he chuckles, “I had a list in my head of people I wanted to work with, ya know we’ve played with a lot of people over the years, I remember talking to [Foo Fighters drummer] Taylor Hawkins at a show we did about 2 years ago and he was all ‘yer man, you gotta let me know when you’ve got a record, I’ll come down’ and I thought, ‘yer! That’d be great! Get Taylor down to play drums!’ but when it came down to it I found myself putting beats down, just on a little drum kit, just demos really with a view of getting someone else to do it. I came back to it a few days later and really liked the performances, and I thought ‘there’s no point getting anyone else to play’, it was just how I’d imagined it sounding. I fell into it really - By the end of it I’d played most of the stuff. I was just thinking about what was best for the songs and that’s how it ended up.”

For the first time in his musical life Gaz Coombes isn’t filtering his ideas through his bandmates. It’s a freedom that he’s enjoyed “but not in a bolshy way,” he’s quick to point out; “it was a chance to really explore as many ideas as I want. The thing about being in a band is that you have to let everyone have their say and try and work as a team. There can be nothing better than a great band that’s really connecting, but Supergrass weren’t towards the end, we were disagreeing on who should do what and how it should sound, and who should play what, it just got to be a real headache. I’m not the only one that felt it, I’ve talked to Danny [Goffey, drums] about it as well and he felt something similar. It wasn’t fun. So it was great to just explore stuff I wanted to explore and just get on with it. I was trying to do something that was just really honest. Just see what came out and let it be.” What came out the other end was pure, uncluttered Gaz Coombes, “I really wanted the sound of each performance to influence the next,” he says, “I just wanted it to sound like me.”

If that’s what ‘Gaz Coombes’ sounds like, then it’s not too shabby. Released a few months back, Here Come The Bombs is easily the best thing he’s put his name too this side of the millennium. At times dark and atmospheric, as on beats-led opener ‘Bombs’, at times all bouncy electro like ‘Break The Silence’, and in places - the lovely ‘White Noise’ being a good example - it sounds unavoidably like the lower-key end of Supergrass The traditional Coombes touchstones are still there, there’s still a healthy nod to Bowie for example (“he’s always going to creep in there because he’s already covered all of the bases” says Coombes), but now it’s the starker sound of Low rather than the Ronson-led Ziggy era that inspired Life On Other Planets or In It For The Money.

Reviews have been mostly strong, though Coombes says he always tries his best to avoid reading them - tricky when your management keep sending you the good ones. “There was one time I went on holiday” he says, “and I picked up an Uncut or something in Smiths and accidentally read one that wasn’t that great,” which naturally stuck in his craw? “well it was alright, 6/10 or something, and said a few things that kind of pissed me off, as is likely if it’s a so-so review, it was more that they’d just kind of got it wrong and seen it in a strange way, and I wished I’d never seen that. I was used to the management sending me through glowing ones. But it’s been good, man. The response has been brilliant, I didn’t know what to expect and I’ve been really pleased with the initial response to the record”. I decide to keep quiet about DiS’s 6/10 score back in May.

The first two phases of ‘Gaz Coombes: The Solo Career’, recording and release, appear to have gone pretty swimmingly, though the solo experience is clearly still a jarring one, “I had a brilliant five or six months getting it together,” he enthuses. “I knew it was really good, I knew it was some of the best stuff I’d ever written, but it’s really different putting it out there when you’re on your own without having band mates around you to share the disappointment if there’s disappointing feedback, or equally share the great reviews as well.”

Weirder still, you’d imagine, will be phase three: taking relatively new material on the road. “It’s an odd feeling not having those hits to fall back on”, admits Gaz. “Before, even if we were having an odd show we’d know we’d always have ‘Caught By The Fuzz’ to roll into, and everyone would know that and that would get things back on track, but I’ve got no fall backs - everyone's hearing stuff for the first time.” So, no temptation to slip the odd smasher in for safety's sake? “It’s not what I want to do really, I want to stick to the record - I’m not really ready to play Supergrass songs again yet, if I did it would be tracks that were close to my heart for some reason. I had a chat with the boys and we all agreed we’d steer clear of the bigger Supergrass hits like ‘...Fuzz’ and ‘Alright’, they’re so ingrained in the band and I don’t want to fuck around with that. It’s hard to envision doing that performance without Danny’s rolling beats and all that sort of stuff, I’d just rather stay away from it. But, you know, if the time is right, if the gig is right, I might pop a couple in.”

Going out without the Greatest Hits comfort blanket might be scary, but it seems to be working out. “I’ve really liked it, it’s a really interesting way of performing, getting people’s kind of instinctive reactions, and it’s been great”, admits Coombes of his early shows. “Now my fanbase has started hearing the record more and more it’s going to get to a point where people have favourites - already people are singing along, and that’s great to see.”

It’s a bizarre world to find yourself in; on one level at least, a new artist. Supergrass gained their fanbase in a more innocent time and the landscape has irrevocably shifted. “A lot of things have changed”, he admits, “it’s not just about not being a solo artists or not being in a band, the industry around us has changed”. There’s social networks for example, and the obligation to commune constantly with your fanbase, which he says he struggles with. “It’s a tricky thing to compete with new, young bands who’ve grown up with Social networking. You a start a band and then you tweet everything about yourself. It’s really tricky to compete with that, and I suppose the secret is not to - to just give what you want to give.” He is after all a man who’d rather not “see a mad sunset or something and pick up a phone and tell everyone about it, I just want to sit down and enjoy it”.

But then that’s Gaz Coombes. For him, it’s not about tweeting the pictures and playing the hits. He’s finding his own path, and clearly relishing the mystery of where it will take him. “I wanted to explore who I am.... It’s a question I’ve been asking myself every few years- what am I like? what’s my sound? I thought I uncovered it at times over the years, but you just never know. It’s interesting for me to find out what I instinctively sound like when I just put things down, and it’s actually quite dark. It’s a different thing- I like visiting those slightly darker places sometimes. lyrically as well, it’s been really interesting. I really enjoyed it”. Darkness? Gaz Coombes? What, did you still think he was young, walked green and kept his teeth nice and clean? Think again.

So we leave Gaz Coombes, alone in the dark with no safety net. And what’s next? “I’m excited by the ‘Gaz Coombes presents...’ umbrella,” he says. “I can do so much under that, whether it’s a movie soundtrack album, or produce a collaboration album, something like Josh Homme’s Desert Sessions, I’m a big fan of that. Maybe doing another album, without sounding too poncey maybe doing a trilogy of ‘Gaz Coombes Presents...’ albums. There’s a lot of areas I want to dive into. We’ll see.” Maybe he’s still alright after all.

The single 'White Noise' is out on October 22nd.
Gaz Coombes plays the following UK shows in October: