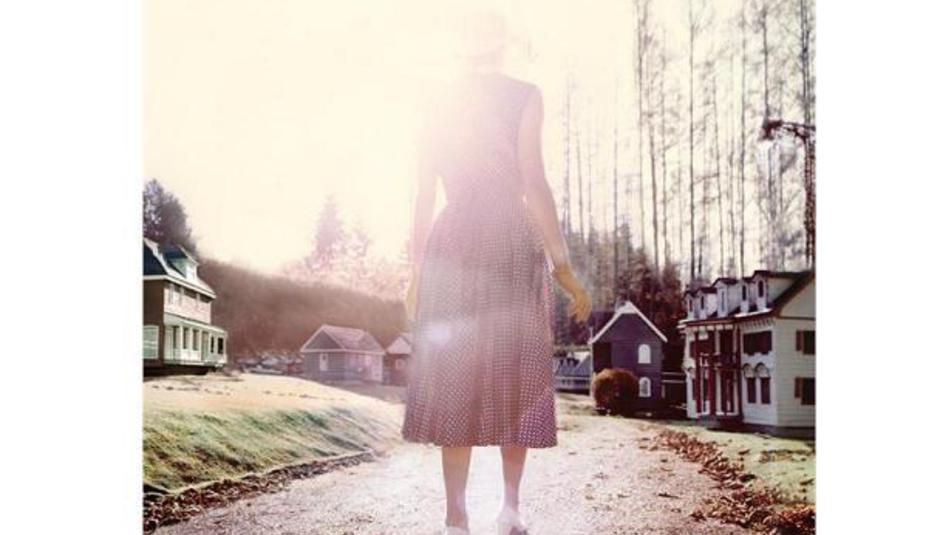 On ‘Into Giants’ Patrick Watson is not messing about, not one toy is getting left in the cupboard. And it is all quite overwhelming, there being so many things here worthy of note and celebration. It's beautifully paced, for one thing - a syncopated, shuffling lullaby. There's a heart-stealing, muted brass section. And then there's Watson's voice; a Buckleyish falsetto that just seems wonderfully effortless. What I like most is that this generosity – this being able to cram so many pause-making moments into one teeny, tiny song – indicates a musician who does not trouble himself; there is always more in the Watson larder, he owns the magic purse that always jingles. I mean, I could write you some hot review rot about who it sounds like, and what it reminds me of – but I know that if I read a review like that it would put me off. Because I would assume I knew what it was, filing it swifter and harder than a robot secretary. And then I would miss out. And I don’t want you to miss out, internet, on ‘Into Giants’.

Keane - ‘Silenced By The Night’ (Island)

I am unapologetic about my love for Keane, but I draw the line at paying seven hundred and ninety seven pound for their first single - not least when it is embedded on the least romantic format. I love them, my love for Tom is nearly as palpable as the irrational dislike I felt for his female companion when I sat behind them at a Rufus Wainwright concert, years ago. It was a rage only tempered by the man I sat next to - whose noxious, unholy garlic breath seemed like a kind of social terrorism - unbelievable, it was. And it’s hard, this; being sat in front of art that makes you weep, a few rows back from the physical, female – and very real – manifestation of the fact that you are not going to marry Tom Out Of Keane, because Tom Out Of Keane has a beautiful, pony-haired, slip of a lover and there she is, the steaming wretch, right in front of you. I mean, I’m over it now – and I can see how, in many ways, the Tom Out Of Keane of my daydreams is better. Because he would never ask me to get bin bags if we ran out, and I’d never catch him wiping errant wee from the bathroom floor. And I would not have to smile at him as I stirred that night’s supper, while he played me ‘Silenced By the Night’, when I would be wanting to say, hang on now, Tom, this is a bit by numbers. I would also not have to bury the thought that his new quiff reminds me of Paul Shane; it is definitely a stylist’s fancy.

The Proclaimers - ‘Spinning Around In The Air’ (Cooking Vinyl)

Cultural superiority is a strange thing and I would be a horror, I would be lying, if I did not admit how occasionally I am prone to it myself. But if I meet one more fartknuckle who thinks it is alright to categorise The Proclaimers as some sort of amusing, Scottish novelty I will FREAK OUT, YOU GUYS. I mean, it is not as if they are the only men in music who do not look like Tom Hardy; and yes, I have noticed how they have 'quite pronounced' accents, thank you for asking. What is most important – what could, in fact, be life-savingly vital – is that they write some of the best lyrics this land has ever known. And that their love songs are some of the heartiest, lustiest, most unabashedly good-natured things you will ever hear. I mean, you wooers - you big old fools - could learn a thing or two about pledges, and sacrifice, and grand gestures, from a song like ‘Spinning Around In The Air’. Which is just the most brilliant of list songs, in which Charlie and Craig swear to ‘donate something to a kid’s charity of your choice’ if that's what you want; before they promise to ‘be a worst traitor than William Joyce’ if you only wish it; or ‘sing you a song in Sam Cooke’s voice,’ if they only could. This is what a proper declaration sounds like, everybody - big, brave, public promises to quite literally climb over Jackie Onassis’ body if it meant they could climb on you. I mean, scaling a woman! So good.

It took a few spins before ‘Propagation’ worked on me. And then I found it has a subtle magic, that was something to do with the vibrating chords, the heavenly way it drifts. It's certainly not music in any kind of hurry, and for once, it earns the right to every, halting syllable. See, usually I want to walk behind singles this wavery like a Biff, repeatedly kicking their arse until they hurry the uckf up. But I don't want to do this to Lower Dens.

Far be it from me to point out that it is downright unfair when someone is SO good at something, their talent becomes their albatross. It’s not like I want to say that Moffat’s talents put him in a lonely category of his own. One where his smarts are so peculiarly marked and original, that I can’t actually listen to him that often. It’s just too easy to get spoilt about him, to hear ‘Car Song’ and understand that it is ‘just’ Aidan Moffat being a clever, dour, wise prick about life, and its dirty margins.

I include this as much for what it represents, as I do for how accomplished it is. And isn’t it good, isn’t it grand, that one of our most fearsome modern genres has produced a style of pop song this mournful, and located this far down the bar. ‘Still Silver’ (like a lot of soulful songs that are not so much in dubstep’s shadow, as they are springing up, in parallel, beside what is left of it) is slow, serious, and - unlike quite a lot of modern nonsense these days - does not have the air of a hooker on a slow day. By all of which I mean; there are no I’d Do Anything For Yous, or You Can Do Anything To Mes on 'Still Silver'. And I happen to think that's healthy and not a little refreshing - despite how grey it sounds.

Dan Mangan is not just in the business of having extraordinarily long, extraordinarily good song titles. Because he can also write songs that really and actually do start off sounding like ‘Dear Jessie’ before barreling off into some man-wail and strum that never manages to be dread - even though man-wail/strum rank among some of my most hated things. ‘About As Helpful As You Can Be Without Being Any Help At All’ – which no music writer has any business shortening or calling ‘About As Helpful…’, especially when an ellipsis has rarely contained so much wisdom - has some ridiculously pleasing, merry-go-round strings and the stern and peeling, gold-leafed heart of a carnie. It made my eyes widen with pleasure, yes, it did.

The Fresh & Onlys - ‘I Would Not Know The Devil’ (Sexbeat)

At my absolute dreadest, I can be known to quietly grumble to myself that other singles columns are available [outrage! curses!]. Also that there are ones in actual newspapers, and that [never!] they are ALWAYS GETTING RELEASE DATES WRONG. And then, occasionally, I find something like ‘I Would Not Know The Devil’ and realise I completely missed it. And then I feel the cool barrel of leather in my palm*, remember I'm the ringmaster, which means it’s MY LOOKOUT if I want to tell you about The Fresh & Onlys, whose seven is buyable here. It’s a psychedelic, rockabilly jam, yes. But it’s especially great for the whiff of ne’er-do-welling; boys whose car you shouldn’t get into, boys who buy fancy hair pomade you've never heard of, via mail order. Essentially all the twanging about makes you daydream of other lives quite removed from the humdrum of your own. And since that is the point of music; and since the only thing I know about rockabilly is that I like any scene where the chaps have muscly, Marlon arms, we’ll leave it there.

Look at the waveform on that)! Somebody is in a right old snit. And that’s all it is sometimes, rock music - someone being really, really mad about some stuff - and you not being able to discern exactly what that stuff is. But it not really mattering, because they’ve captured just how lovely, and just how nice it feels, to be absolutely livid.


Wendy is on the internet, here. Sometimes you can’t remember where you first heard a phrase, and you are racking your brains, hoping it is something from a Roth or a Donne, only to discover it is a bloody lyric from bloody Chicago.