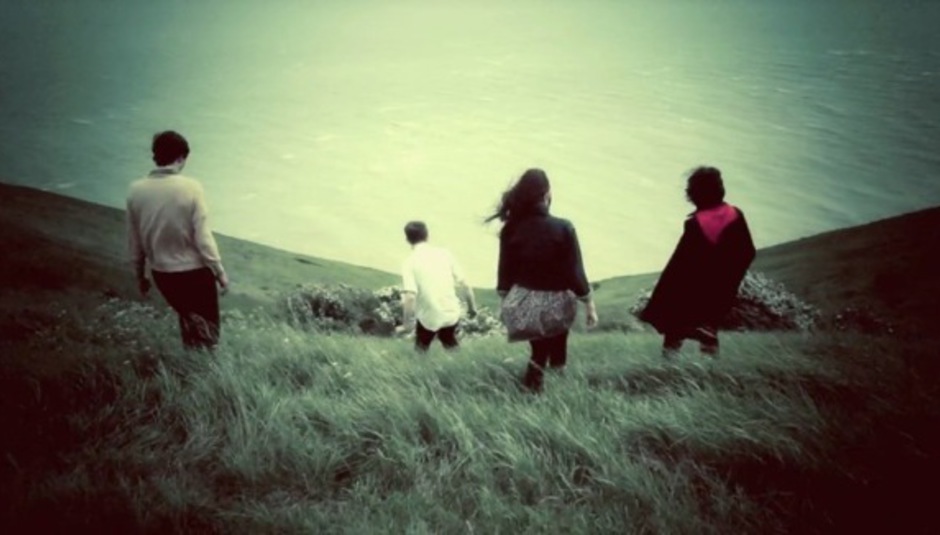 For the first 45 seconds ‘Come On Over’ is ‘Everybody Hurts’. After that it has some coffee, but at all times I love it, Veronica Falls just seem more accomplished at jangly heartbreak than anybody else. In the misremembered, utopian schooldays of my woman mind / as yet unwritten high school screenplay, Veronica Falls are the band formed by a parallel-universe Brodie Set; hats sulkily plonked on ill-cut fringes and gym bags filled with banned books because plimsolls are boring. By all of which I mean; they’re sort of a glorious cliché of what indie bands are meant to be but wonderfully real at the same time, naïve and romantic, like trying to do self-harm with a placky protractor. I’ll shut up, because they’ve also managed to find the heart in archive footage of people doing interpretive dance in carparks for their video - no small feat, it’s lovely.

If, like me, you have a pash on Alan Sparhawk about a mile wide - but at the same time feel it might do him good to live a little – stealth-hug sheepdogs, steal ice creams from small children and generally bunk off from Double Serious, you might like ‘Revolution’ EP. Which may be ironically named, being one of the traddest things this week, all FM flourishes, big-capped choruses and no doom. As a fan of the sort of guileless, reverberating power pop Brendan Benson et al specialize in, Retribution Gospel Choir aren’t quite radio enough for me. But they are leant a certain, blade-like edge when you know it is made by Him Out Of Low and that at any minute he might wang you round the face with a guitar. Tension!

Danger! It’s so sexy. Also, violence, co-dependence and driving your tattooed boyfriend’s shit car to pick him up from jail; we women bloody love it. I mean, call me kooky, but while some popstars seem content to toy with the imagery of abusive relationships as if they were just another trash-ironic nail colour – short-shorts straight out of a Povvo Chic fashion spread, bare feet artfully dirtied – good old Jessie Ware is belting off in the other direction, all stateliness and composure. Gamely positing herself as a mid-90s dance diva (with the requisite migraine-inducing Sade updo and hands that vogue of their own accord), she spends the whole of ‘Running’ barely deigning to sing down her nose at you, as if you were quite the speck. Unlike 99% of pop videos these days, there is also no sub-Hollyoaks storyline in which Jessie pretends to have a pretend argument with a pretend boyfriend. In fact, it is only the addition of Outfit Two - a ladybusinessman blazer – that makes me wonder if the whole thing were parody. It’s proper class, either way.

Just because a thing can be imagined, does not automatically make it interesting. Unless of course, you are Gaspar Noé’s tedious little one-trick brain, which is still spaffing out the tawdry as if he were the only one on the planet able to think transgressively. It’s a shame, because ‘Love In Motion’ and its wonderfully propulsive, filfy bassline and toilet-recorded, distort vocals do not need a video in which a child is made to look and dance like a prostitute. NOW, I realise that the moment one becomes annoyed with this sort of thing, the pricks have won. And OF COURSE, I can hear them, calling me bourgeois. But still, really, can you actually imagine actually having to spend more than five minutes with people thick enough to find this interesting? Ha, ha, sexy children, brilliant.

Electric Guest - ‘This Head I Hold’ (Because Music)

Pitch perfect and amiable, Electric Guest are no doubt being marketed to the sort of people who threw away their copy of ‘The Night’ by Frankie Valli when they realised it was a reissue and that the men what done it were well old. It’s not that it’s not ‘good’, just that Electric Guest are basically a covers band, Ronsonised in every way; impenetrable through all that lacquer. ‘Don’t feel,’ they sing - and well they might - the production here being so glossy it numbs.

At the same time as I am handing Lower Dens a red rosette for outright pretension [hands down, the best line in a press release this week, was Lower Dens' ‘…the minimalism here is monumental’], I am giving them credit. I mean, few singles try to make a virtue out of absolutely fuck-all happening for 56 seconds and diddly-squat occurring for 4 minutes thereafter. Oddly, it very nearly works; I nearly buy into ‘Brains’ and its slow-burn. But at the same time, I want to shove their no doubt ill-fed, misbegotten forms out of the way of the desk, so I can turn up what they are doing and actually hear the ‘elements in the music that seem subtle at first [but] soon reveal themselves as colossal developments’. Should the people of music deliberately obscure the bit of their art they want you to notice?

Rather than listen to Bill and Aidan, I considered it my duty to listen to all three of the original songs being smashed up and covered here. And my Nanna loved 'The Power Of Love' nearly as much as she loved Elton John’s Niki-ti-ta [NO NANNA IT IS NIKITA, STOP SINGING IT WRONG]. But she’s dead now, so that made me cry. Of course, ‘The Glory of Love’ is better than all the other singles on this page, the naivety of power ballads being in many ways ten times more shocking and transgressive than anything someone like, ooh I don't know, Gaspard Noé, could imagine. But I’m the teeny, tiniest bit tired of people saying ‘Someone suggested I do this on Twitter!!1!1!1!!!!’ as if it were any more interesting an explanation for the inception of a piece of art than a.n.other bloke hijacking your path in Sainsers, and not moving until you agreed to do a knowing cover of Every Loser Wins. A small gripe, obviously.

I had completely forgotten about Still Flyin’ - but I loved the jerk-jazz of ‘Runaway Train II’, so more fool me. ‘Travelin’ Man’ owes less to Talking Heads and is less haughty - and as you might expect from a song containing the line ‘I’ve never felt so out of tune, as when I’m not with you’ it’s idealistic and it’s hopeful and it’s the sort of song that has the band’s pets in the video. Their brand of post-punk-pop isn’t going to break anyone’s brain, but it’s so sweet-natured it seems churlish to get in a snit.

Lightships - ‘Sweetness In Her Spark’ (Geographic)

So there I was, right, thinking ‘This sounds a bit Teenage Fanclub', when up popped his lovely face; Mr. Gerard Love, curly-haired Scotch hunk of my formative years. In a video, in which a woman in a white gauze dress really does run through a field of yellow flowers so her dress catches on the blooms. Even the press release is in on it, chinny reckoning that Gerard’s band are ‘locked into a relaxed and breezy grove [sic] that demands the windows be flung open’. And the next thing I am thinking is, ‘How have all of Teenage Fanclub managed to preserve their innocence after all this time, and what cave do I crawl into, to get mine back?’.

I know everybody, let’s take suck all the blood out of ‘No Diggity’ and turn it into something infinitely duller, a ‘No Diggity’ for those to lazy to do sex, with all the heat and raw appeal of a grey eyeball. Despite being told he’s WOO ANONYMOUS WOO, I’m not sure I care who Chet Faker is, especially when he sounds like an anaesthetised Ben Volpeliere-Pierrot, drunk on chillout mix CDs and Jose Gonzalez. Bleh, electronica for cosies.

Wendy is on the internet, here. This morning she is of the opinion that great art is mostly about what you choose not to do. And that anyone who feels the need to put sexed up children in a video in order to make people feel uncomfortable about sexed up children, is probably the sort of person who needs a poster to tell them WAR IS BAD.