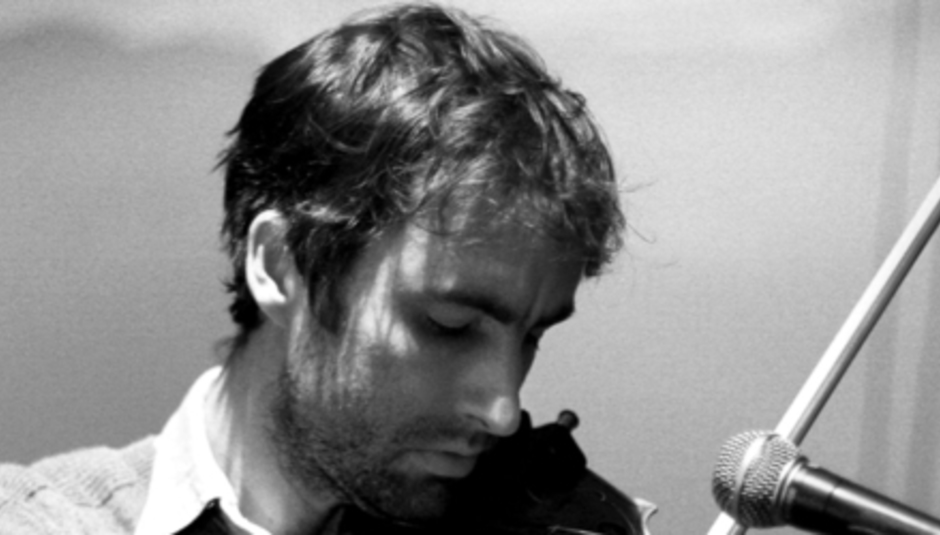 “Thanks y’all, good night,” are the words that somewhat distressingly fill the Barbican Hall on Monday evening as I fumble through the doors. Having missed a support slot from Minneapolis’s own looping extraordinaire and long-standing Andrew Bird drummer Martin Dosh after an excruciatingly delayed journey that included the immensely upsetting loudspeaker announcement “we’re sorry for the delay to this service – the driver is currently en route via taxi,” there’s wasn’t a lot more to do aside from sink into my seat, ponder the calibre of the UK’s rail network, and wait for Andrew Bird to take to the stage.

As the lights go down, Bird casts a gangly figure, striding on stage in a elbow-patched tweed jacket lends him an air of something between a reprisal of his Dr. Stringz role and a secondary school geography teacher. Swiftly launching into a solo rendition of breathtakingly serene Break it Yourself cut ‘Hole in the Ocean Floor’, he is neither of these, but rather the empirically eccentric songsmith you might wish him to be. It’s also immediately clear how internalised the whole art of looping has become – whether Bird was originally drawn to it more as novelty or artistic contrivance I don’t suppose we really know, but as always his pedals are as important to the performance as the violin under his neck or the guitar slung from his back. Setting his trademark double-headed horn speakers in motion at the song’s close, and letting the submerged loop echo about the palatial venue, Bird is quietly joined by his trusty three accomplices. “We don’t normally do this,” he says awkwardly to the long sold-out room, “but I think we’re just going to play the whole of the new record, pretty much just as we recorded it.” That’s exactly what follows: Break It Yourself in its entirety (albeit slightly out of sequence).

It’s pretty spectacular: ‘Eyeoneye’ roars with and uninhibited energy, ‘Near Death Experience Experience’ is allowed to sit back into its urbane groove, and ‘Give It Away’ bubbles and fizzes with vitality. This being the first night of a tour that will undoubtedly occupy Bird for the foreseeable future, there are of course some hiccups – technical problems afflict Jeremy Ylvisaker’s amplifier during the achingly delicate ‘Sifters’, while ‘Orpheo Looks Back’ is preceded by a little false start. For the most part, though, these slips only serve to aid Bird’s onstage demeanour, one that flips between instinctive abandonment when performing, and endearing diffidence when talking – tonight he often takes time to explain the unequivocally novel ideas behind many of these new songs. Taking a minute to describe the “perverse enjoyment” he takes from the embarrassment of the onstage mistakes, though, he asserts – with the band's heavy touring schedule such as it is – that “in a couple of days we’ll be so… slick."

But after Break it Yourself has been played cover to cover, the opening notes of ‘Plasticities’ ring throughout the auditorium, and the open arms with which everybody – both performers and audience alike – seems to welcome this old acquaintance is extraordinary. In following this up with Andrew Bird and the Mysterious Production of Eggs track and live favourite ‘Tables and Chairs’, Bird and his band only confirm the fact that in a live setting, familiarity is the yardstick when it comes to audience appreciation. A brief encore affords him the opportunity to exhibit a different facet to his musicality: with the band unplugged and gathered around a single microphone, they deliver country-indebted versions of Charlie Patton’s ‘I’m Goin’ Home’ and The Handsome Family’s ‘So Much Wine’ (“a classic,” as Bird refers to it). But once again, it’s the final song of the night, Noble Beast’s ‘Effigy’ (with the band fully amplified once again) that poses that question of familiarity: while Break It Yourself is a sublime record in a career frankly full of them, and one intricately and flawlessly replicated onstage, it’s the quintessential Andrew Bird tunes that coax the excitement out of the Barbican Hall tonight.