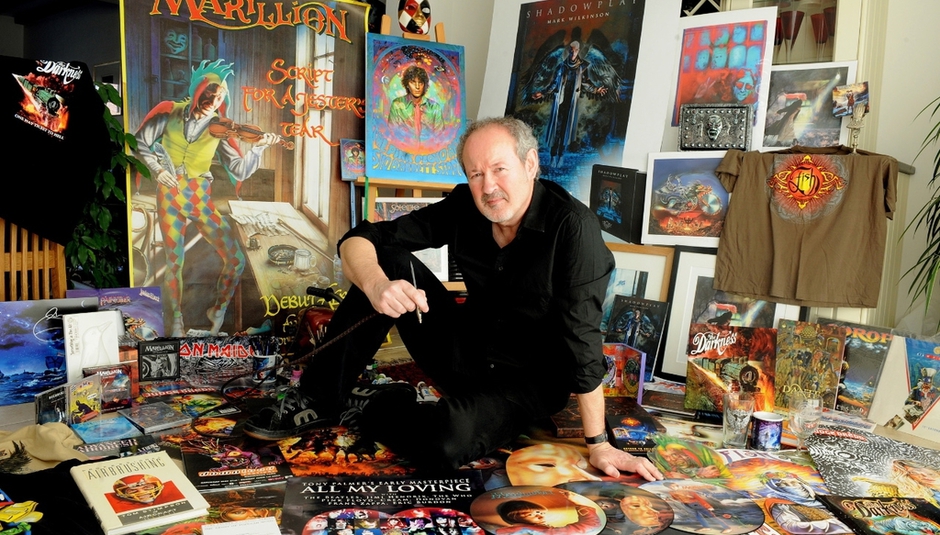 Sometimes writing for DiS can be a good gig. Today I'm part of a press junket to the Home of Metal exhibition in Birmingham. As part of the cultural heritage of the city, the exhibition makes perfect sense. Birmingham was where Sabbath came from, where Judas Priest emerged from, where Napalm Death crawled from. But why Birmingham? Why not Norwich, or some jaunty seaside town? For the same reason The Stooges came from metallic, clanking Detroit, Home of Metal confirms the notion that the local steel works fed into the heavy sound that came from the musicians of Birmingham. The steel press machinery is on show, as are pictures of the area, a recreation of a period front room from the Seventies, as well as artworks and exhibits from the larger bands.

It's a fascinating and in-depth exhibition, and I'm lucky to have a chance to sit down Mark Wilkinson. He's an artist who helped to visually define the works of one of the leading lights of British Metal in the 1980's, Judas Priest. Although it isn't advertised here for obvious reasons, he's equally well known for his earlier work for Marillion.

DIS: How much influence do the bands themselves have in your artwork?

MW: There's usually a spark of an idea [from the band]. For example, when Rob Halford rejoined Judas Priest for Angel of Retribution, they had had an idea to do something like the Angel of the North. A big metal angel, obviously the album title really called out for something like that. So that was the start, which they put forward, and then it was left to me to start drawings. The rough process can take anything from one to six months, or it can go on and on and on. It just depends if they see what they like early on then you're fine, but if it needs developing... DIS: How much say do record companies have in the final work?

MW: Nowadays, none, it's mostly left up to the bands. Even in the early days, it's hard to think of an example. Obviously they kick in [if they have a legal concern]. The first album I did for Marillion, Script for a Jester's Tear... it had a scene painted that depicted a rough bedsit. There was a Coca Cola, and a Fairy Liquid bottle, Fuller's Brewery in the ashtray. EMI said "No, we've got to change all that, we can't have any names". Also there was some screwed up musical notes on the floor, and they wanted to make absolutely certain that this music wasn't stolen. It was just random notes, but I think they actually got somebody to try and play it. DIS: I know CD's are dying out now, but when they came in they pushed vinyl out of the way a bit. Did you prefer having the scope of a gatefold cover?

MW: Oh yeah, that's the era I came in on. The record shops in the old days, for me they were like art galleries. I used to walk around and spend a whole afternoon bunking off school just looking at the records. I used to buy some albums just on on the strength of the sleeves.

MW: Sometimes you can get tripped up by doing that, I've bought some really awful ones. But I was really influenced by that artwork, I'd always wanted to get into that side of things and get involved.

DIS: So what was your break?

MW: Marillion. At the time, during their heyday Marillion were second only to Iron Maiden in terms of their sales of t-shirts and merchandise. Bravado, who did all their tour merchandise obviously thought that what I was doing was interesting enough, and they needed a designer to do the Monsters of Rock posters. So I did all of those from the early days, and Judas Priest saw those. And that's how I got the link up with Judas Priest.

DIS: How has the structure of your work pattern changed over time? You started off airbrushing, you must be working mostly on computer now.

MW: Yeah, I use the computer a lot for airbrushing now, it's just so much quicker. Occasionally bands want it done in the old style, just artwork to hang... The problem is it's quite time consuming to do a big airbrush painting. It depends if you can justify the amount of time you're going to spend, against the fee you're getting. You still do the initial drawings, the roughs, the pencil drawings. They get approved, and you can colour it in if you like, using the computer.

DIS: I've just noticed, while we've been talking... The front cover of Nostradamus... Is it a partial self portrait?

MW: (Laughs) No! What, because of the beard? DIS: Not just the beard, but the facial structure, and the the eyes. Not that you have burning eyes, obviously. Where did the figure of Nostradamus come from?

MW: I started off with Hannibal Lecter, and gave him a beard. That's where I started with him. I really wanted the piercing eyes, like you said, the burning eyes seeing into the future.

DIS: Well, it's a terrific record, and the cover brings the whole package together. It's kind of the icing on the cake.

MW: Oh, thank you. Somebody said on Facebook the other day that they thought it was the worst thing I'd ever done, and was I moving into a different area of work. Or something like that.

DIS: Well, everyone's a critic. What's the piece of work you've been most pleased with?

MW: I was very pleased with the Four Horsemen, for Nostradamus. DIS: You did the deluxe box for Nostradamus, didn't you?

MW: Yeah, I did all that. There were songs on the album about death and war, and they thought it would be an idea to pull those in visually with the four horsemen of the apocalypse. It was kind of a throwaway remark "... if you can think of any ideas". I really got stuck into that one and loved doing it.

DIS: It's kind of a classic Heavy Metal motif.

DIS: Who do you consider your contemporaries? If you could direct me to one of them and their work, who would it be?

MW: I was a fan of the sixties artists, Hapsash and the Coloured Coat, Michael English and Nigel Waymouth. And I was a big fan of Rick Griffin, who did a lot of work for the Grateful Dead. In terms of more current artists, I love the work done for Mastodon by Paul Romano. I love the artwork done for Tool. When we were talking earlier about buying albums on the strength of the packaging, Lateralis was an example of that for me?

DIS: Did you see the deluxe sleeve they had for 10,000 days, where they broke the sleeve up...

We walk over to one of Mark's most famous works, the cover for Painkiller by Judas Priest that sold thousands of t-shirts all worldwide, and I take a quick snap of him next to it. For an overview of his work, have a look at The Masque, and for a much better idea of the Home of Metal exhibition and events, you could do worse than look at homeofmetal.com. Tomorrow, a quick chat with Tony Iommi.