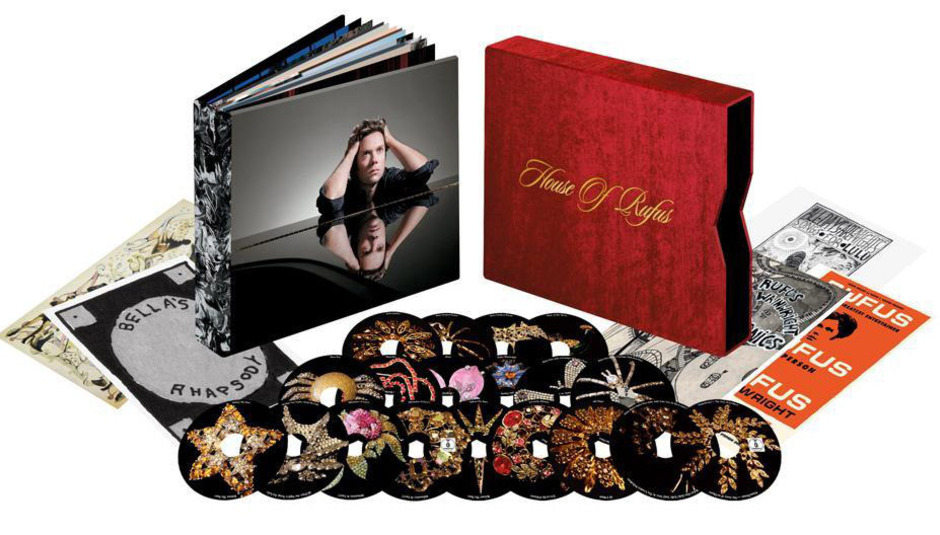 Next week, critically celebrated and DiS-loved singer, songwriter and sometime Judy Garland dresser-upper Rufus Wainwright, releases a 19-disc boxset, entitled House of Rufus, to coincide with his 5-night residency at the Royal Opera House in London. Here, the man himself introduces the boxset as part of DiS' series of pieces for Rufus Week...

"It’s strange having a box set come out at the age of 37, and in my opinion there are arguably four directions in which this act can be taken: two bad, one so-so and one good.

The first is that I'm dead, which for all intents and purposes doesn't seem to be the case and yes: dead is bad.

The second is that I'm somehow physically lame and either can't sing nor play the piano anymore. Now, arguably certain bold detractors will snidely comment that this has in fact always been the case, but I'm calling your bluff, and for those of you who bought this beautiful box set in good faith, last I checked it seemed everything was functional and up to par so no, and yes: being physically lame is very very bad.

The third is that years ago when I was in my extreme youth I experienced wild success for a time and then rather abruptly fell off the radar, thus giving a kind of cult cache in what is otherwise considered a failed career in general. But judging by the slow and steady rise of my CD and ticket sales over many many years, (one unsuspecting victim at a time darling), this I believe is also not the case.

And perhaps unfortunately so.

This third option would have permitted years ago the acquisition of prime Manhattan real estate, an asset which during the economic crises barely winced and thus would have allowed me to either sell, or throw a bunch of parties for cash, and I could have been that guy you see when you first arrive in the city, with your bright eyes and bushy tail, who you become unduly impressed with due to the extreme impressionability of the innocent.

And Thus, in a very jaded fashion, I dub this the "so so" reason.

Finally we've arrived at the fourth and mysteriously tagged "good" one:

The suspense is mounting, the eyes of the reader bat, the door creeks, a small marble ball gently rolls across a hard wooden floor.

Could it be because the world is officially ending in 2012? Or that once I play the Royal Opera House I will grow a permanent beard and put on weight to look like a real composer? Or that after this famed concert it will be revealed that Martha and I are actually the same person, and that person is in fact our other sister Lucy? Or perhaps it's because I'm such a massive genius that in turn everything in my life, clothes, kitchen appliances, my dearest Jorn and my trusty nose hair clipper will all be wrapped, regardless, in sumptuously gleaming red velvet?

How about this. The fourth reason is that I'm very very lucky to have over the years worked with so many wonderful people, made some pretty good music and traveled all over the world to see you folks, the fans, and I thank you profusely from the bottom of my heart for generously supporting my career and spending a lot of money on this beautifully crafted collection of my work.