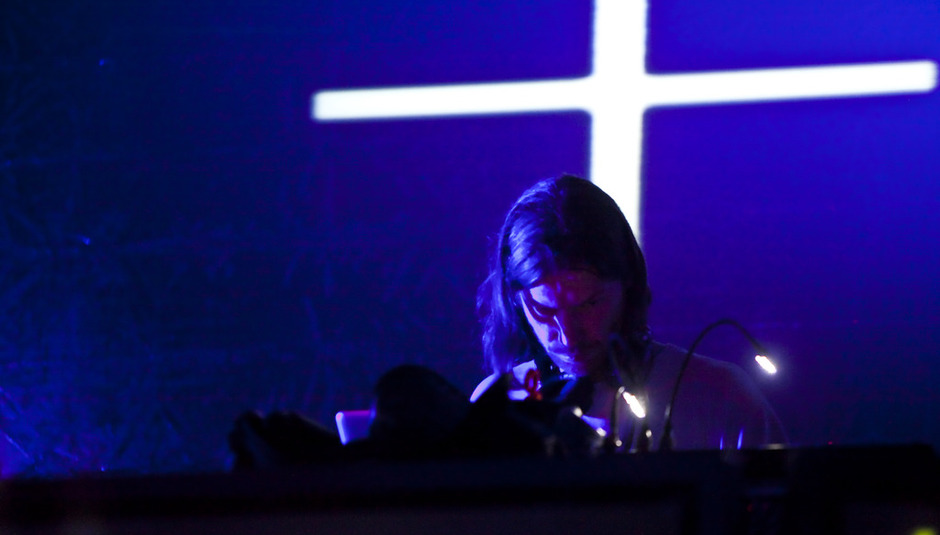 The makeshift camp on Plaza de Catalunya that greets us as we roll into Barcelona on Thursday evening is a sobering reminder that all is not well in Spain. But just a few hundred yards away from the dogged remnants of Spain’s youth protests, Sonar is proving itself to be somewhat sturdier as it pitches up in Barcelona for its eighteenth year. The AstroTurf in the SonarVillage outside the MACBA art gallery is thronged with people listening to Eskmo shred beats to pieces at the close of the Ninja Tunes showcase, reeling in those who can’t quite squeeze into the SonarDome for South African DJ Jullian Gomes’s classy deep house. Meanwhile, the SonarHall, deep in the bowels of the building has been roadblocked since Nicolas Jaar’s live set, those ensconced in there for the past few hours only just beginning to spill out into the late evening sunshine.

However, Sonar doesn’t appear to have been completely immune to the country’s economic downturn. Whilst you could hardly call it deserted – there’s still enough people across these four rooms to start a decent-sized revolution of their own – numbers at Sonar By Night do seem down on previous years. Of course, it’s debatable whether this thinning on the ground is so much to do with festival-goers' thriftiness as it Sonar becoming slightly swallowed by its own success. The Off-Sonar parties that now proliferate across the city offer the chance to see high-calibre DJs in a setting slightly more intimate than a hangar you could park a B52 in - and sucking away some of the punters who can’t quite face the endurance test two nights here can turn into. But whatever the reason, it certainly isn’t the line-up, and those who’ve psyched themselves up to brave Sonar By Night are duly rewarded.

Pearson Sound drops a set with as much old-school house as fresh new beats on Friday while Scuba plays it even more four-to-the-floor, warming up for Aphex Twin who lulls everyone into a false sense of security with some melodic electro before bringing out the buzzsaws. On Saturday, Aphex’s visual collaborator Chris Cunningham loses out to Janelle Monae in the entertainment stakes – Jackson Five covers, the soul hip-pop of ‘Tightrope’ and a band clearly having just as much fun as the crowd in front of them just seeming a bit more suitable for a Saturday night than basslines belched out over footage of torture and dismemberment. But there’s still enough hectic headfuckery when Africa Hi-Tech follow her up.

Elsewhere in the SonarClub, Underworld’s predictable set of crowdpleasers is predictably effective – all the avant-garde electronica in the world will never be a match for 30,000 hands shooting skywards when ‘Born Slippy’ kicks in – and even though there’s still the lingering suspicion that The Gaslamp Killer’s mix of bass music and Sixties psych-rock might make him the dubstep DJ Yoda, his set still does the do. Then, we and almost everyone else leave Magnetic Man struggling to keep the crowd’s attention wandering away to the Numbers showcase next door – with Deadboy playing it deep and weird, Jackmaster‘s electro-tinged house upping the fun and still finding a place for ‘Idioteque’ before Italian veteran Lory D unveils some sleek techno – or the Night Slugs showcase at the new Sonar Car stage, L-Vis 1900 and Bok Bok’s grimy beats a surreal soundtrack to the sight of wild-eyed ravers ploughing into each other on the dodgems. Still, if you want conclusive proof that Sonar isn’t a festival beholden to its nominal headliners, the evidence isn’t Saturday night’s exodus from Magnetic Man but the fact that – at Friday’s Sonar By Day – no-one really seems quite sure who the headliner actually is. The name Dominique Young Unique is raising so many non-plussed looks that some people seem keen to believe it’s going to be someone smuggled in under a pseudonym – something of a standard Sonar trick which has seen both Laurent Garnier and Scissor Sisters appear under assumed aliases in the past – until a tiny ball of bratty energy bursts onto the stage at SonarVillage. To be fair to this Floridian rapper, her booty hip-hop does a reasonable job of keeping the crowd even after their initial curiosity has ebbed away; especially considering that she’s not only got a hard act to compete with as B. Bravo play some wonderfully wonky beats and hip-hop in the SonarDome, but a spectacularly hard act to follow after Four Tet – the seconds when ‘Love Cry’ first emerges from the speakers being one of those ineffably unique Sonar ‘moments’.

And it’s generally at Sonar By Day rather than Night that those moments really happen – be they the revelation of finding our favourite new DJ in the form of Illum Sphere, the sweat-drenched delight that is Actress’ closing rave-up in the SonarHall on Saturday, or the bizarre spectacle of Shangaan Electro, where South African dancers shuffle like speed-crazed psychedelic peacocks to an ever-accelerating rhythm whilst the MC counts up the BPM, sounding not unlike a rave Jim Bowen as he gets closer to ‘180!’ Add to that Hype Williams’ disturbing mogadon soundscapes or Global Communication playing their still peerless ’76: 14’ in its entirety and you’ve got more than enough to outweigh the odd duff moment. Such as the discovery that – clad in a white vest - How To Dress Well bears more resemblance to Rab C Nesbitt than R Kelly, and his impersonation of the latter is about as convincing as Gregor Fisher going R’n’B. But then this festival’s reputation for the ‘experimental’ resides on not always knowing what you’re going to get and – even though times might have changed – Sonar’s willingness to take a risk remains the same.