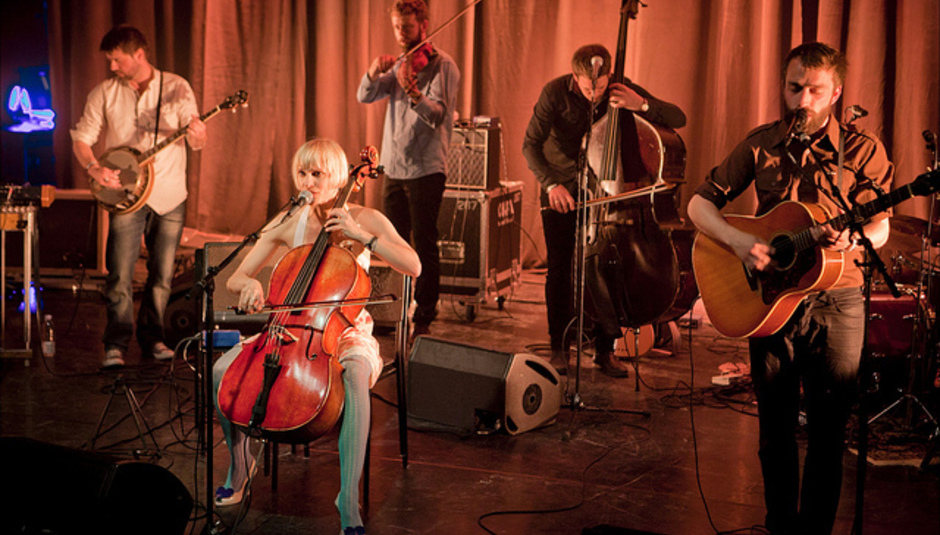 SPOT Festival is one of those places where it doesn't really matter if the sun shines or not, you're likely to have a good time whatever the weather. Of course, the fact that there are few proper outdoor stages helps, but the proximity of everything, centred around Aarhus's impeccably designed Musikhuset helps to create a festival where, occasional queues permitting, it's very hard to miss anything and very easy to see an awful lot.

The broad aim of the festival – 2011 being its 17th edition – is to promote the best in Danish and Nordic music, something it has done very well in the past and continues to do. The festival proper starts on Friday, but not before a few shows take place in and around the city itself, a short walk away from the main festival site on Skolegada, next to the Domkirke. Unfortunately bad timing and an equally bad sense of direction force me to miss the opening concert in the cathedral but my bearings are regained in time for the InterSpot showcase, where young Danes Kiss Kiss Kiss (honestly, the drummer looks like Even Stevens era Shia LeBeouf) and Austrians Ginga partake in an exchange programme of sorts, each featuring in each others' sets.

Neither have much extra-special to offer at the moment, but what is done is done competently and there are a few decent tunes stashed away from each band. Elswhere, KT Tunstall and Teitur are getting it on in a musical sense on the outdoor stage, where it has now stopped raining, but heaven only knows how that ended up.

Friday offers more rain than the previous day which does not make a difference to the evening proceedings but other, off-festival type events such as the Tigerspring Day Party feel the force of the weather, with only a few scattered souls about for Michael Møller's delicately-played ballads, and that's before the truly heavens open.

Meanwhile, Anna Von Hausswolff is the first act I see of SPOT proper, quietly slipping into the rear of Musikhuset's Lille Sal. Even from back here, it's impressive. I'm not sure if she was trying to impersonate a Danish accent between songs, but it certainly seemed that way. Regardless, the Swedish singer hits her piano as manically as she aims to hit the highest of the high notes, and succeeds. But she does more than sing spikily, including jumping all around the vocal range quite effortlessly. She does it slowly, she does it quickly, she does it well, above all. I'm sure her face is contorting beyond recognition, but it's hard to tell from up here. Honningbarna sing in Norwegian, which could prove an obstacle when trying to crack lands outside of the far North but their general demeanour, sound and raucousness does more than make up for it. The singer appears to be a gruff-voiced cello-wielding maniac, threatening to spin himself into the ground or at least decapitate himself with his bow. Musically they are something like Kvelertak's younger brothers (and youthful they are), without being quite so threatening, yet creating a similar level of screaming intensity. A bundle of aggressive fun, in essence. I would chant with my fist in the air if I knew the words but, as I don't, I have to settle for a broad grin.

Now, I'm not one to engage in wanton Americanisms and I find it hard to ever use the word “dude”, in writing or in actual, real-life speech. It's mildly disgusting. Yet, it's hard to find another more suitable one to describe Mugison, who is pure charm on legs. All the girls want to be with him, all the men want to be mates with him and so on. He howls, he strums and he croons with just an acoustic guitar and occasional gigantic reverb. His tales are encapsulating, almost as much as his between-song patter which is typical in its Icelandic drollness. That is to say very funny. In terms of offerings from Danish bands on Friday, things were promising with relative veterans Thulebasen on record being one of those bands who offer a wonky take on, well, just music in general. The sideways slant they put on things abounds at every opportunity, not doing the completely unexpected but at least taking a step to the side and then poking you on the shoulder before you turn the other way.

Plenty of bands on the SPOT bill have had their fair share of good press and good things written about them, and plenty of it is warranted and deserved. Another pair are Treefight For Sunlight and Ice Age who, we are frequently told, are currently getting a lot of love from Pitchfork. Treefight For Sunlight practically bounce around the stage with their woozy and upbeat, melody-heavy tunes making the air thick with joy, if such a thing is possible. Ice Age, meanwhile, do that contrasting hardcore punk thing where the lead singer wanders all about the place whilst the guitarists stand there po-faced, barely moving more than his hands up and down the fretboard, looking utterly contemptuously at all which surrounds. It might not be especially new, having been done in this manner for 30-odd years, but it sure as hell is exciting to listen to and that is a lot of what matters. As with Mugison and a handful of others, the Icelandic contingent are well represented here in Denmark, most of the bands are new but some are legendary. Mythical, to me. Somebody mentioned Queen when describing HAM to me, half an hour or so before they were due to play. They also mentioned Iron Maiden. Certainly the latter of these is closer to the truth but neither comparisons really do HAM – billed as the “gods of Icelandic rock” – any justice at all. There are many amusing things about the band; the lead singer's look, his voice, too, sounding like Fozzy Bear at all times, both when in full flow, belting it out and also when delivering back stories. But, stone me to death if this wasn't 11 out of 10 on the enjoyment meter. They even made me regret sitting instead of standing, so thunderous was their rock. A thumping way to end day one.

You know Kleerup, the Swedish super-producer guy? Well, he has a band too, called Me And My Army. They are a band who do something like classic rock with acoustic undertones. The only problem is it's not actually all that good and, although staying longer than 10 minutes was a chore, those moments were enough to create a fully-formed opinion of distaste. It could have got better, but I doubt it.

OK, I am going to put my hands up for this. I missed the Japanese kraut-trio perform because there was a football match on, which has long since been forgotten about. I feel ashamed to say that I missed Nissenenmondai because the soundcheck, which I did see, was one of the most heart-stoppingly exciting things of the weekend. By all accounts it was a performance to match Lionel Messi's mesmerising one, much like Bernhoft's act in the main hall, which is confusing. Confusing because it's unclear whether his act of looping several guitars and mouth-created beats and singing wildly over the top of it all is easy to love or hate. Certainly the teenage girls in the place seem to approve, but the whole thing does grow very tired after about 20 minutes. The performance of Norway's Jenny Hval, much like her current album Viscera, is astonishing. That record is near indescribable and unparalleled in its lyrical discomfort, yet both lyrically and musically one of the most engaging records to be released in recent memory, combining movements of acoustic-led minimalism with those where the texture thickens along with the intensity. Her personal and corporeal words “I walked into town with a toothbrush pressed against my clitoris” raise a few titters tonight but that is probably not the desired effect. The audience was indeed a strange one, with most people sitting down, people coming and going throughout and even two bickering men who thankfully did not come to blows. Hval's own tone too is unsettling, some songs almost spoken in an English manner, crisply and sharply delivered. Live it remains as true to the record as possible, accompanied by drums, bass and other peculiar percussive instruments. And so it ends.

There were many great and potential great things that we didn't manage to see, and plenty of “big names” among that, such as JJ. But the joy in SPOT festival is not just seeing what Denmark and the Nordic region has to offer musically – quite a lot, we know – and nor is it in meticulously planning who you want to see and where, it's about just seeing what you feel like, when you feel like and as is often the case, surprising yourself.