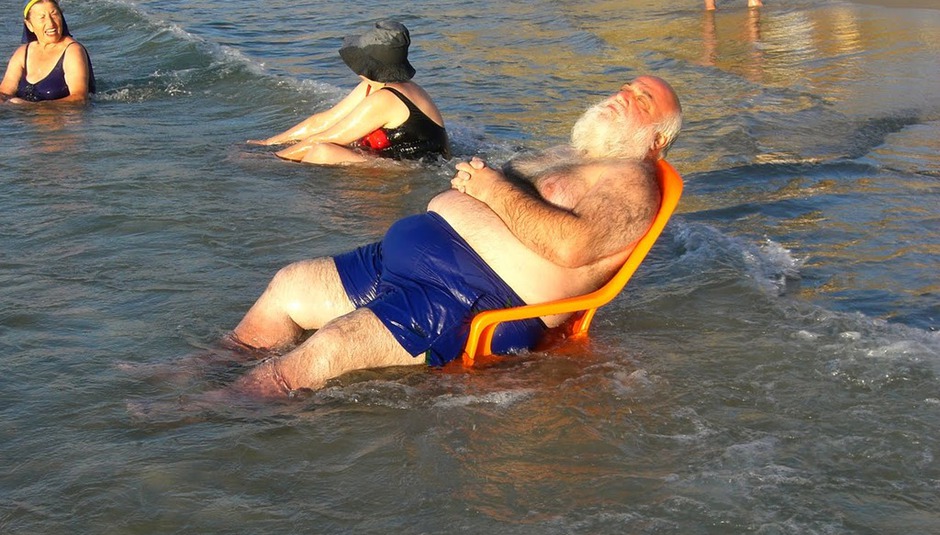 Following our local perspective, here's Brad Barrett, one of DiS' regular contributors' dazed and bemused tales from beside the seaside for this year's Great Escape...

I'm sure you all know the figures – 300 bands blah blah blah, 30 venues yadda yadda – but as I listened to every single artist playing this year before attending, I can safely recommend around 10 - 15 percent of those acts. Believe me when I say the rest aren't worth a second listen.

But that's still a huge amount for fussy 'ole you and me. So let's wade through the mire of my memory and work out the highlights and lowlights.

The most rewarding times at a metropolitan festival like this is when there's an all day, all evening venue that provides bands that never dip below entertaining. Such a situation is rare, but it happens on the Friday of The Great Escape this year, beginning with Dad Rocks! at the Pav Tav (the Pavillion Tavern for those unfamiliar with the fond nickname). The solo project of Mimas' Snævar Njáll Albertsson, the dual violin four-piece weaves a wonderful swathe of ebbing melody around Albertsson's delicate picking and quirky, joyful lyrics. A burst of In-Flight Safety at the Queen's Hotel reveals there's not much fun in paying attention to something tried and tested. There's not much more forgettable than what you've heard many times before.

Back at the Pav Tav, locals Cat Matador are stitching stuttering, chiming rock with soaring violin and at one point shred a crescendo Arcade Fire would find it difficult to top. Social Club are undeniably Weezer, but when has that been a bad thing? But the top of the daytime menu at the shockingly packed pub is Tall Ships. This Brightonian trio have been quietly stirring up some elegant, tectonically-complex tunes for a while now. Their gallant, galloping pop manages to treat climaxes as mere punctuation. Excellent nonchalant anthems. Moving on to Audio for the DiS celebrations sees the excellent Team Me in fine form, joyously snatching circular melodies out of the air, with 'Dear Sister' - and its addictive sherbet volcano of a melody - a hyperactive highlight. The Phantom Band, meanwhile, continues to be peerless. Madrigal chanting, warped electronic bass and shuddering to higher peaks all wrap around each other as the Scottish sextet fit their jigsaw pieces into intriguing musical shapes. Back into the cramped confines of the Pav Tav, The Victorian English Gentlemen's Club continue to baffle the majority with their succinct and uncompromising kilter-destroying pop. With two thirds of Reuben and a portion of Hundred Reasons, Freeze The Atlantic has every right to be incredible. That they're not is only slightly cushioned by the fact that Guy Davies is drumming again and he's possibly this writer's favourite drummer in the UK. Watching him play is like poetry in frenetic motion. Having said that, there is some heavy promise here as long as the wander further away from the more generic edge of post-hardcore. Stagecoach deliver more noisy, punkoid-fuelled energy with melodies lost in the increasingly crowd-addled stage. By the end the band can't hold the masses back, and don't even try. For sheer fun and atmosphere Stagecoach triumph. But it isn't until The Xcerts come on at a weary 1:15am that the Pav Tav becomes truly cataclysmic. The likes of 'Scatterbrain', 'Distant Memories' and 'Slackerpop' from their second album has the assembled throng yelling their lungs out. Older favourites 'Crisis In The Slow Lane' and 'Aberdeen 1987' reach fever pitch, but it's the churning, stampeding 'Hurt With Me' – with frontman Murray leaping from speakers onto the crowd, thrashing his guitar into oblivion – when the broiling sea of bodies really kick off and end up pulling the chandelier-like light fixture down into the face of yours truly. Brushing it off while the bothersome light gets carried off into the night, chants of “one more song!” are answered with current set closer 'Nightschool'. Bouncers look bemused, amused and exhausted; those witnessing feel euphoric and wrecked; and The Xcerts are just shaking their heads in disbelief. It's almost as if their time is upon us and they hadn't a clue.

Bookending the extraordinary events at the Pav Tav during the weekend are a slew of excellent bands too. Norway's Blood Command, fronted by blonde and blue-eyed screamer Silje Tombre, clamber over hardcore, kicking it in the face in the process while Brisbane's DZ DEATHRAYS merely pummel their instruments – guitar and drums – like punching bags, making a whole heap of ferocious and exhilarating noise in the process. Frank Turner continues to rise and rise and with songs from his excellent new album _England Keep My Bones _ getting a warm reception during both his afternoon HMV instore and Coalition set, bodes well for a very successful year. Anyone brave enough to write an a capalla folk song about the death of King William of Normandy's son on the hunting grounds of the New Forest deserves that much. Idiot Glee from Kentucky sings reverberating hymns and electronic soul songs – including a surprisingly ace cover of Bill Withers' 'Ain't No Sunshine' as a set closer – in Shipwright's Yard and is as faltering as ever. However this amateur charm endears us to him, especially in this forgiving suntrap, and his best moments outweigh his off-key mistakes. Daughter is a suitably calm, if heart-wrenching, beginning to Saturday. Her shy persona – as she trys to hide behind the mic – lends itself well to the familiar songs of love and loss, but there are moments when her voice hits a sweet spot that sounds undeniably incredible. That's when the pain, the joy, the anger spills out almost visibly. An intriguing young songwriter. Finally, DiS favourites Braids fill Komedia on a sunny Brighton afternoon. Sheltering from the sun in the dank, dark venue Braids easily soundtrack the contrast with a wavy flurry of notes cascading upon phased beats and the gentle intoning of Raphelle, giving us an aural glimpse of outside. But it's merely pleasant. None of the hooks are sufficiently barbed enough to grip you, and the humming swirling sonics are a breeze rather than a maelstrom. Which seems a shame, but Braids are what they are; a satisfying diversion for a half hour away from the outside world.