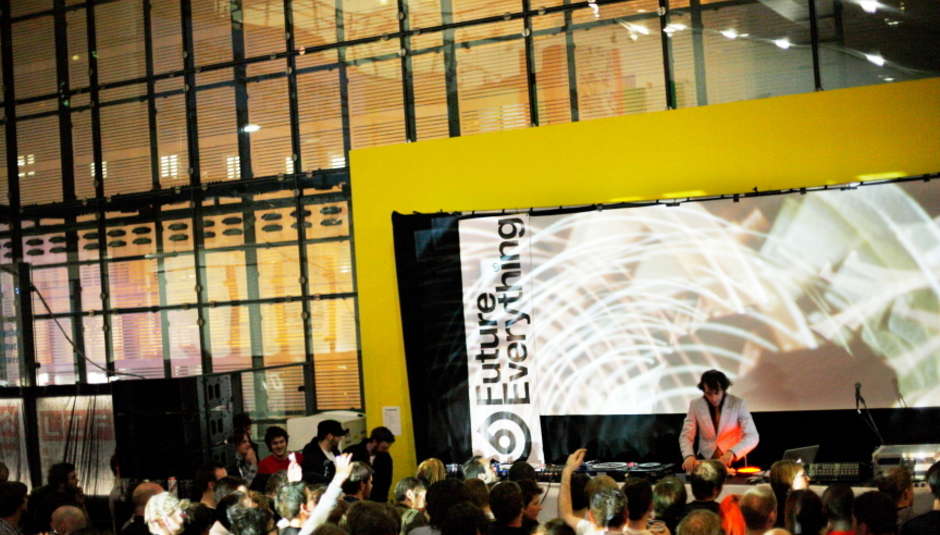 A step apart from the rest of the festivals that usually dominate Manchester during the month of May, FutureEverything returns to Manchester this week promising another week of forward thinking debate, discussions and demonstrations into technological innovations in art and music as well as commissioned multimedia projects and artworks.

Central to the festivities - as they always are, and what with us being a music site an’ all – are the evening live performances themselves. Since its first festival (under the name Futuresonic) in 1996 the festival organisers have always sought to bring the cutting edge and avant-garde to the event. Last year saw Ryoji Ikeda bring his masterful Test Pattern to the city with Syrian phenomenon Omar Souleyman, and Congan collective Konono No. 1 also playing. From that year to this though there appears to have been a notable shift in the direction of the line-up, meaning that the likes of the more populist Beach House and Warpaint find themselves on the bill – a move that’s indicative of the sheer volume of festivals FutureEverything must now compete with in Manchester during May, perhaps. Yet beyond these obvious spots, there’s still a veritable feast of mind opening performances in wait, performing across a range of Manchester and Salford venue. Here are just six that you may wish to consider.

An Evening With Steve Reich; Thursday May 12, Royal College Of Northern Music

Last week we had a week of articles in tribute to the seminal composer as the Barbican in London commemorated him with a series of concerts in which musicians performed the work of Reich. FutureEverything however has the man himself for one evening at the Royal College Of Northern Music where he’ll be in conversation with Scottish pianist David Horne and playing selected works from his long career.

Long time Drowned In Sound favourites 65daysofstatic debuted their re-scoring of Douglas Trumbull’s 1972 sci-fi film Silent Running at the Glasgow Film Festival last Autumn and it proved so successful the Sheffield four-piece were commissioned to take it on tour. The Sheffield four-piece’s towering instrumentals have always had the potential to represent cinematography and the resultant combination feels as natural as it does thrilling.

Recently lauded by both our albums section and also editor Sean Adams, Erika M. Anderson’s dream-pop-flecked Past Life Martyred Saints sits somewhere untraceable. A little way away from 90s revivalist grunge, slightly glossier than lo-fi and coming at it with some clear pop sensibilities in mind, EMA is a puzzle of different influences and diversities who may well reveal herself clearer in a live setting.

Local collective Mind On Fire have long been known around these parts for rummaging into the depths of Manchester in order to find some of the most forward thinking and exciting music the region has to offer; and they present just some of the fruits of their labours here, Paper Tigers come across from Leeds with a decks and saxophone set, with local loopsmith Dennis Jones and the panoramic electronica of LA77 also included in a stirring underground lineup.

It’s a bit harsh on the excellent Scout Niblett to only be highlighting their support acts, but Suuns as a live proposition are an intense experience, flitting between bitingly bleak passages reminiscent of Alan Vega’s chilling turn in Suicide and raunchier, sneering rock. The Canadian four-piece turned heads at last year’s CMJ festival and debut album Zeroes QC was a shape shifting beast that both pondered and thrilled in equal measure.

We’re not sure how this one’s going to go to be honest, though the image of the veteran DJ dancing around in a Gorilla suit in front of King Kong is one that’s likely to drag us down to the RCNM on Saturday. More promising is that his soundtrack, originally aired on radio in 2008, features tracks from Sigur Ros, Radiohead and Portishead amongst others, climaxing in the obviously apt ‘Monkey’s Gone To Heaven’ by The Pixies.

For a very handy FutureEverything playlist do click here