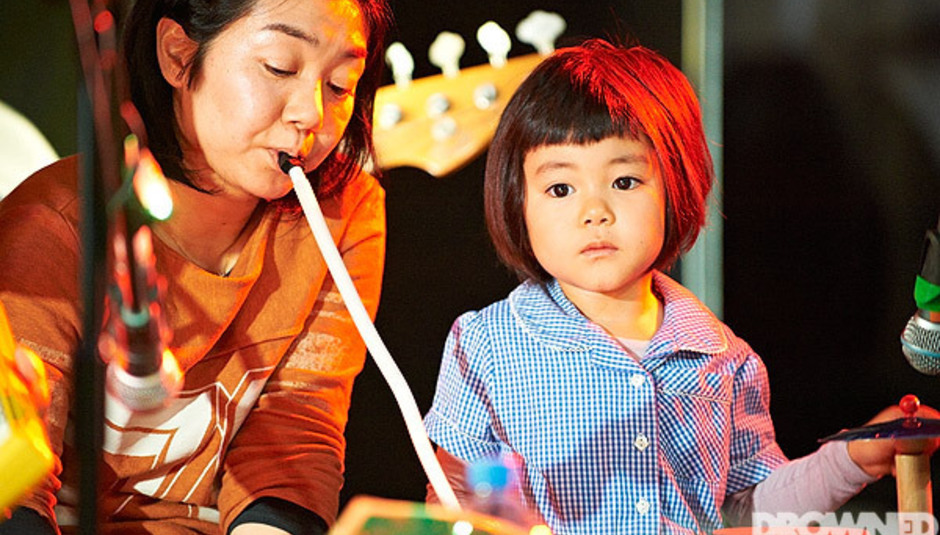 This weekend last, Noel Gardner, Rory Gibb and Andrzej Lukowski descended upon Butlins, Minehead, and unanimously failed to see Boban Markovi?'s drooled over set. Ho hum: Emeralds were worth it. Here is what they did instead.

Six months spent lecturing friends, colleagues and family members as to why exactly this was going to be one of the finest ATPs EVER was more or less enough to ensure that it wasn’t, but a bloody respectable showing regardless. Certainly it was beset by circumstance (some light snow disruption; the loss of Throbbing Gristle then, tragically, X-TG), but there were some strange and unhelpful bits of programming by ATP, notably weirdly early sets by the dancier acts (Black Dice and Mahjong were almost painfully excellent in their respective early evening and mid-afternoon slots), and a barren Friday stacked against a Sunday heavy with clashes. But fun chalet buddies and a healthy appreciation for the sauce are really all it takes to paper over most of the cracks, and certainly Godspeed You! Black Emperor made for as deft a bunch of curators as the festival’s seen since the Mike Patton/Melvins shindig.

General response to the Montreal post-rock godheads' trio of comeback shows seems to have been cautious approval rather than out and out religious rapture, but as a fan of the band who’d never seen them before, my butter was pretty much melted from the moment the celestial strings of ‘Lift Yr. Skinny Fists, Like Antennas to Heaven...’ began their sky bothering ascent. GY!BE don’t acknowledge the audience, have zero showmanship beyond their storied (but actually kind of underwhelming) Super 8 films, and I suppose one might argue that they only really have a back catalogue of 12 songs. But what songs: over two nights and one afternoon they smash into ‘BBF3’ like the wrath of God, that cranky old loon roaring like a desert-crazed prophet of old; they rip a golden rift through the air with ‘She Dreamt She Was a Bulldozer, She Dreamt She Was Alone in an Empty Field’; they charge our atoms with ‘Monheim’s ebon thunder. Sure, they don’t do a lot and it’s hard to exactly blame those lured to ATP by other bands and somewhat perplexed by the headliners’ lengthy neo-classical symphonies, but this is elemental stuff and they only crank up the intensity as the weekend progresses.

Space is running short and hopefully my colleagues will pick up on a few more acts, but one thing great thing about this festival was full use being made of Crazy Horse: a lot of recent ATPs have kind of been a tag team between Pavilion and Centre Stage, but here we had Oneida’s consistently thrilling Ocropolis jam all Saturday and some truly awesome leftfield nuggets on the Sunday, notably Franciso Lopez’s freaky blindfolded sound installation, an hour-long barrage of cold, overwhelming sounds which pleasantly served to remind me that my imagination is a horrible, horrible thing. Too much other stuff to mention, but Marissa Nadler’s increasingly hard edged dreampop is an ethereal slap in the face that vindicates the early start - she's almost painfully shy, but her piercing voice and diamond hard guitar clamp together like God's own vice; Emeralds were almost shockingly intense, their fluffy melodies carved out with furious and gratifying levels of effort under blood red lights; and hangedup are almost in tears as they hit us with everything they have, a gorgeous tidal cascade of violin. And while I have to confess to finding 'Weird Al' Yankovic's songs are more enjoyably accurate pastiches than actually funny, the sheer amount of effort the guy puts in - Star Wars costumes, an actual segueway - in spectacularly gratifying, especially as the fest winds down. Perhaps most important, though, a branch of Morrison’s has opened, closer and – of course – better than the Tesco. A Christmas treat indeed. As odd as it might seem to some that a festival curated by regrouped Canadian rock band Godspeed You! Black Emperor would deliver good laughs, the comedy starts in earnest on Friday afternoon, before any bands have even played. That is, if you read ATP founder Barry Hogan’s editorial in the festival programme, where he (and this is where shit gets real) answers back to The Wire, who once said the festival was less cutting edge now. Barry roars back with a joke implying the organ’s total readership would be dwarfed by the attendance at one of his events. BAM! Good thing they didn’t suggest ATP founder Barry Hogan has a deeply tiresome public persona and skin so thin he may have been the only person in the UK to risk sunburn last weekend.

His festival? Now that was pretty kicking. As much as I effed with Godspeed! first time round, I was never invested in them enough to know of their music tastes, beyond various associates and spin offs on the Constellation label. Turns out said tastes are rangy and considered, and make for a (largely) well balanced lineup. The other two reviewers will likely have more erudite thoughts on Godspeed! themselves than I; suffice it to say, though, that their Friday set pushed the same emo buttons as on their first UK tour in 1999, notwithstanding eleven years’ chance for their telegraphed crescendos and obfuscated politics to seem a shade cheesy. ‘BBF3’ still kills it: try amusing yourself by imagining the interviewee’s taped rant being spoken by 8 Ace from Viz.

Odd, in a way, that GY!BE acted almost exclusively as a nostalgia trip for this observer, while bands I’d not seen in even longer, like Bardo Pond and Nomeansno, seemed to exist specifically in the now. BP turn doom metal riffs into twinkling psychedelia, and vice versa; Isobel Sollenberger is still, what’s the word, willowy. NMN, progressively-minded punx from British Columbia, are so inspirational – motherfuckers are nearly in their SIXTIES and have never once been caught adopting racism or having to eat soft food – that I forgive them for not playing ‘Body Bag’.

The Ready Brek-ish glow attained by watching Nomeansno is replicated during the 135 minutes of ’Weird Al’ Yankovic. Both active for roughly 30 years, it is likely that their paths have never crossed (I’d buy the collaboration album, mind you) but they both represent the triumph of affable nerds in a world of boorish toughs and careerist cynics. Only one of them releases ticker-tape from a cannon after their last song; only one elicits a mass whoop from the crowd when Leslie Neilsen appears on screen namechecking him. I mean, if literally anyone else did two consecutive parody songs about Star Wars I would walk out, but Weird Al is the consummate free pass-earner.

As much as this kind of observation gets iterated at almost every ATP, it is pretty rad how you can see Weird Al, then straight to Emeralds, then straight to Wolves In The Throne Room like it weren’t no thang or general sign of the monocultureless times. Helps that those were my three favourite turns, of course. Up almost against the speakers for Emeralds’ set (the trio suffered sound issues which, er, completely passed me by) their cosmic throb subsumes ‘ambient’ or even ‘drone’ as a style. F’real, as much as Does It Look Like I’m Here? is choice falling-asleep music, you’ve not heard it until you’ve heard it LOUD. Sorta similarly, WITTR carry the reputation of black metallers giving the genre several unwanted adornments: art, contemplation, ecology, onstage candles. Doesn’t stop them giving us an hour of furnace-fuelled, pokerfaced crusty BM blast. A lot of genre gatekeepers would have had expectations confounded here, and then not admitted it.

And this is without even giving proper dues to Flower/Corsano Duo or Neurosis or Borbetomagus or The Ex or The Sadies or some other fine examples of humanity. I’m out of space both on this page and in my tiny mind. Despite having spent an impressive number of hours here over the last few years, it’s still tough to get over just how bleak Butlins is during the grip of winter. Its rows of identikit chalets stretch on for what seems like eternity, an illusion only heightened by bitter winds and the usual prodigious volume of cider.

Still, compared to previous years there are an impressive number of performances this weekend that bring a touch of unseasonal heat to proceedings; in particular, Philip Jeck’s set on Friday night sees him discover new worlds within battered junkshop vinyl, each plate slowed to a snail’s pace and drowning in analogue warmth and static crackle. Maher Shalal Hash Baz on Saturday evening is similarly immersive: Tori Kudo’s backing group scatter across the stage, wringing a curiously placeless sound from smoky clouds of brass and guitar.

Sunday’s Emeralds show is a thing of rare and sultry beauty. If this year has seen their recorded output acquire a sheen their earlier albums lacked, their live show retains a darker, grittier feel. As much as anything else, the sheer energy the trio pours out onstage belies the delicacy of the music they create. The rippling arpeggios that cut through the watery drone of opener ‘Passing Away’ hint at terrifying depths hidden just beneath its calm surface, and a gorgeous closing section finds Mark McGuire looping his guitar into tightly enmeshed shapes that weave in and out of one another, before simply fading away. It’s one of the performances of the weekend and a potent reminder that, despite ATP’s recent tendency to drag past glories back from peaceful retirement, there are as many bands right here, right now we ought to be just as excited about.

A musical vacuum on Friday night leaves the evening feeling a little flat, with even Godspeed You! Black Emperor’s performance that evening surprisingly muted. After heartrending opener ‘Storm’, sheer adrenal excitement wins out for the first half of the performance, but the group’s energy slows a little, and we wander off. Sunday morning’s show, however, focuses all the weekend’s energy into just under two hours. The lilting violins that open ‘Static’ prove the most visceral few minutes of the weekend, only heightened by the jagged intensity of its later stages, and closing with the entire Slow Riot EP – a stately ‘Moya’ into the gathering chaos of ‘BBF3’ – is little short of inspired. While the usual questions surrounding reformations can’t help but surface, for someone who never experienced them the first time round it’s little short of revelatory.

The only event that surpasses the twin peaks of Godspeed and Emeralds is also the weekend’s most ambitious: Oneida’s ten hour Ocropolis in Crazy Horse is by turns beautiful, psychedelic, feral, scathing and soothing. Over the course of Saturday we dip in and out, losing hours at a time. Alongside Kid Million’s motorik backbone, Deerhoof’s Greg Saunier hits the skins like a man possessed, jerking back and forth like a marionette beneath fragile peals of guitar and organ, and Chris Corsano’s subtle layering of percussive tics creates a sense of total rhythmic freefall. “This one’s by Oneida”, deadpans Hanoi Jane, before the original five-piece, exhausted and exhilarated, launch into a final hour of their own music. Monolithic twenty minute closer ‘Sheets Of Easter’ rips the last of the audience to shreds, sending us reeling toward an ear-soothing vacuum of silence outside.

In Photos: Cloud Control @ The Forum,...