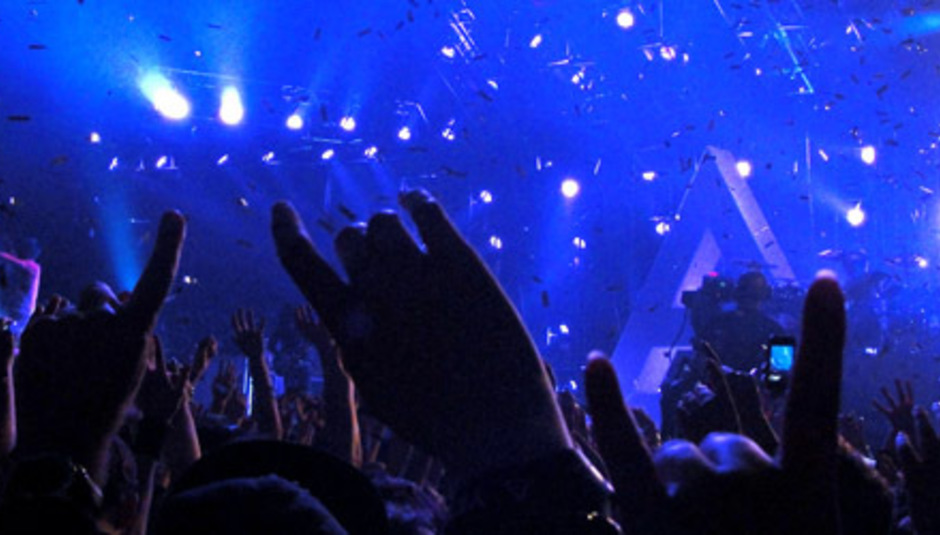 In a small and insanely overheated room, DiS is practically melting. Drummer Shannon Leto, on the other hand, is wearing a woolly hat, and guitarist Tomo Milicevic is wearing gloves. Jared's wrapped up too: with his head in his hands, the 30 Seconds To Mars frontman, video director, movie star and pin-up is nursing a cold that keeps him quite subdued.

Many other bands would have called an early end to their tour, but even in an absolute ton of crazy snow, 30 Seconds To Mars forged on from Birmingham to Aberdeen and back to Manchester – and even with a lot of the transport network grinding to a halt, so did a lot of their extremely dedicated fan base.

By show time later, poorly Jared will have perked up a bit and will run around the stage, commanding the 10,000-strong Manchester crowd like a giant game of Simon Says where we all just keep getting caught out. When he asks who wants to come on stage for 'Kings & Queens', people will be climbing on shoulders, screaming, waving backpacks and small children in the air: in desperate hope of catching his eye.

Think what you like of them: they're getting something right. But it's something, DiS learns, they may not be doing for very much longer.

How was the trip down from Aberdeen?

Did you worry at any point that you'd have to reschedule?

Was there a noticeable number of people missing?

Shannon: No, very few people didn't show up. The majority made it.

Do you enjoy that you have pretty mental fans?

I heard you were outside earlier giving them hot chocolate?

Jared: Yeah. We gave them some hot chocolate.

Your new video for 'Hurricane' has been banned on most TV networks. How surprised were you?

Jared: I think we were all pretty surprised? It's not something that we'd talked about, the possibility of it getting banned or restricted. We knew that we'd have a version of it that'd probably be played on the internet and a version for broadcast, but I was pretty surprised the version we sent to broadcast is the one that got banned. I can't imagine what they'd have said if they saw the other version.

We got pulled off of MTV again just this week because they found a couple of shots that they didn't notice before. So it's been pulled off and we've got to fix it again. Or not.

It's an interesting thing, the debate over protecting viewers. The idea that they need to protect the viewers versus the expression of artists and art. It's a good debate to have. It's a worthy conversation.

How did the idea for that video come about?

Jared: It really was born as a result of the song, and I remember in the studio talking about sexuality and the expression of sexuality through music and how it's generally left to the pop mavens, albeit in a very commercial way most of the time. It's not a territory that we'd explored before, so I was thinking as a writer that it was an interesting place to head toward.

Does it bother you that people might associate your band more with the visuals than the music?

Jared: No. No. Because without the music there isn't the visual. It starts from the song, in our case. But a lot of the songs are very lyrical and very cinematic themselves, so there's a lot of imagery that's going on while they're being written as well.

You sell Golden Tickets for your shows [so fans can meet and greet the band, get autographs, watch from side of stage and other such perks]. What made you decide to do this?

Jared: You know, it's interesting because it's a little bit of a hot topic, but it's really providing a service that people want. When it comes down to it, there's a lot of very happy people as a result of us deciding to do it. So it's been a pretty pleasant experience so far.

Do you worry about the fans who are essentially out-priced of that?

Jared: No, because we're very accessible as it is. From Twitter to the shows, we're a really accessible band, and we've also paid attention to what people want, and we try to provide as much as we can.

Have you started any work on the fourth album?

Jared: No. Who knows if there'll be a fourth album.

Does it feel like the end of the line?

Jared: I don't know, but it certainly should be a new beginning, if at all. Not to be fatalistic or anything. It just feels like this is a... like there's a starting point here, maybe.

Which of your videos are you most proud of?

Shannon: I like them all. And they were all done very differently from each other.

Jared: They're really much more like sculptures than anything. And I don't mean that in a pretentious way, but they're sculptures with images and the way that they're built and there are people sitting around watching how they're made. They're kind of uncovered as they go. It's been a hand in hand process as we're touring and making these things.

Are there plans for more videos?

Jared: Nah. 'Hurricane' was three or four months in total, in the making. So that's it. I have an idea for one more. There might be one more from this album.

Are you having a break for Christmas?

Tomo: Short one, yeah. Couple of weeks off. We play a show on New Year's Eve in Vegas, which is going to be really fun, and then we'll start rehearsal for our US tour, which starts on the 11th in San Diego.

Tomo: Hard to say. I like the La Roux record, but I don't know if I'd call that a favourite. It's fun...