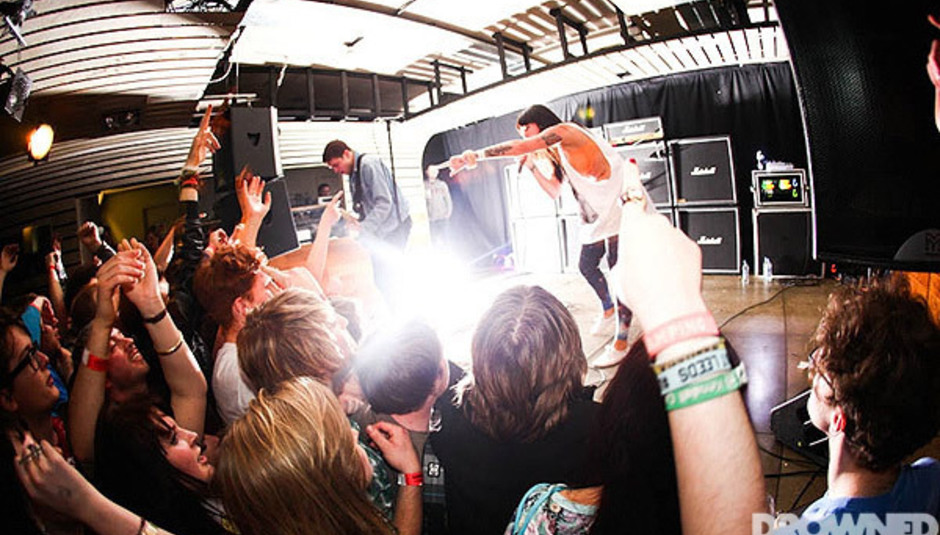 There’s something pleasingly honest about Constellations, a new one-and-half-day festival seemingly built on nothing more than the notion that the people of Leeds could do with distraction from being slapped in the face by swirls of wet November leaves. No temporary Utopias dreamed up from rip-proof nylon here; no self-justifyingly grandiose artistic statements or hand-knitted souvenir programmes to tempt in the punters. As settings go, Leeds University’s utilitarian Refectory and the mirrored pillars of the loveable but low-key Brudenell Social Club are never going to prompt a similar Pavlovian drool among festivalgoers to Barcelona, Worthy Farm or even the chalets of Minehead. So the first Constellations would stand or fall on its line-up: thanks to a fortuitous conjunction of touring acts’ passing orbits and local talent, the stars were looking favourable.

Billed as a ‘pre-party’, Saturday night at the Brudenell was an apt taster for the following day’s mix of music. First up were Leeds’ Eagulls, whose main selling point for their glintingly metallic but essentially chugging guitar rock is George Mitchell, a man whose ferocious bellow and bent-over-backwards gait suggested a gangly tramp trying to dislodge a ferret from inside his too-short trousers. Next, Manchester duo D/R/U/G/S hunched onstage – hoods up, eyes down – twiddling the filters on their SP404SXs. News of the pair’s recent garlanding as one of In The City’s buzz acts was apparently yet to filter across the Pennines; yet D/R/U/G/S’ wrapping of Fuck Buttons-style wide-eyed pulsations in a still-warm-from-the-Hartnoll-brothers synth Slanket didn’t entirely deserve the mass bar trip/fag break that ensued.

Credit to Abe Vigoda, then, faced with a crowd who must have resembled zombie stragglers compared with the kind of peppy, sun-fuelled young punks who doubtless pack out LA’s The Smell whenever they’re in town. Only the merest hint of disappointment crossed Juan Velazquez’s face before the foursome cracked out a set proving that both 2008’s Skeleton and this year’s surprisingly synth-flavoured Crush both spring from the same well of joyous, sweat-flicking enthusiasm. Having to run for the last train home prevented me from seeing BEAK> cover Kyuss, but the two thirds of their set I did catch was enough to crown them kings of the night. Finding something new in Neu! isn’t easy, but BEAK> did, summoning up a lean, spooked groove that prowled hungrily around a 4/4 throb with Matt Williams’ Farfisa whine and the trio’s three-part harmonies echoing through its ribcage.

Constellations proper got underway at Leeds University the following afternoon, and whilst simultaneous running times and the 21st century’s puzzling refusal so far to supply me with a working clone generator meant missing many of the acts spread between the Refectory, Stylus and Mine venues, I did catch the closing moments of Honour Before Glory, with former ¡Forward, Russia! man and Leeds scene lynchpin Whiskas weaving melodic basslines around an agreeable three-guitar post-rock surge.

Clearly, however, it’s songs about doubt, regret and inevitable Antarctic death that draw the crowds on a cold autumn afternoon, as the now-typographically adjusted iLiKETRAiNS brought billowing clouds of gloom to a grateful Refectory. Despite a suspicion that the indie-rock idiom sometimes hinders, rather than advances their sober, cold-water aesthetic, today ILT do their doomed, stiff-upper-lip forefathers proud, their gravitas-laden renditions of ‘Terra Nova’, ‘Sea of Regrets’ and ‘He Who Saw the Deep’ channelled through David Martin’s intense stare directly into the pits of the audience’s stomachs.

In the wake of ILT’s elegies for Captain Scott, it’s easy to picture Sky Larkin’s Katie Harkin bouncing around the door of said polar hut and cheering everyone up faster than you can say ‘frostbitten appendage’, the trio dispensing songs from The Golden Spike and Kaliede with taut, effervescent glee. Over in Stylus, meanwhile, Gold Panda crafted similar euphoria out of dented ragas and half-remembered Fuzzy Felt scenes ahead of Liars’ arrival.

The last time I saw Angus Andrew, he was crouched atop a speaker stack wearing a triangular headscarf, like an unholy hybrid of a mythological harpy and Nora Batty. Today he’s conventionally clad and fronting a slicker, five-piece version of the band, but still carries a sense of unpredictable menace, sharing both that and an awareness of his own theatrical charm with a certain other lofty, heavy-browed expat Aussie frontman. As the strobe light and the smoke machine unite to cast a deathly pale ectoplasm over our heads, Liars manage to reconcile both their murky, chanting witch-hunter side with the more straightforward no-wave rattle-punk of their first and fourth albums – as someone who prefers the former, tonight’s rampaging ‘Plaster Casts of Everything’ soon blows away any lingering sense of disappointment I’d felt on hearing its recorded version.

Later I venture back into Stylus, and within seconds escape by mere inches as Les Savy Fav frontman Tim Harrington lurches sweatily up onto the balcony to snog a curiously acquiescent audience member. Beating a hasty retreat back to the Refectory, I find Los Campesinos! using a late start as the spur for a condensed – “so we’re not going to tune our guitars between songs” says singer Gareth – super-intense set that leaves them redfacedly reaching back into their catalogue when they turn out to have plenty of time left after all. I’m still yet to warm to LC!’s particular brand of self-evisceration on record, but here they have the crowd hanging on Gareth’s every yelp as any band who can induce tinnitus whilst sporting two glockenspiels onstage deserve to.

On to the headliners, and I’ll take it as an encouraging sign of the quality of the bill that Four Tet could appear and prove to be the least popular act. Whilst Broken Social Scene whipped out Johnny Marr in the Refectory and Sleigh Bells had Mine too much resembling the entrance to a beehive for a passing look, Kieran Hebden was left trying to win over a sparse crowd with a frustratingly underpowered PA. With this year’s There Is Love In You, however, Hebden proved he knows as much about harnessing a dancefloor’s collective heartbeat as about wrapping knotweed-like melodies around its synapses. As those of us who didn’t take a subdued interlude as the cue to check our phones are rewarded with the gasp of vaporised endorphins that heralds ‘Love Cry’, the most unassuming man in electronica fails to punch the air, shout “CONSTELLATIONS! Are you READY?!” or do anything other than continue to devote his laptop to our musical pleasure. And for that, we love him.

In Photos: Cerebral Ballzy @ The Prin...