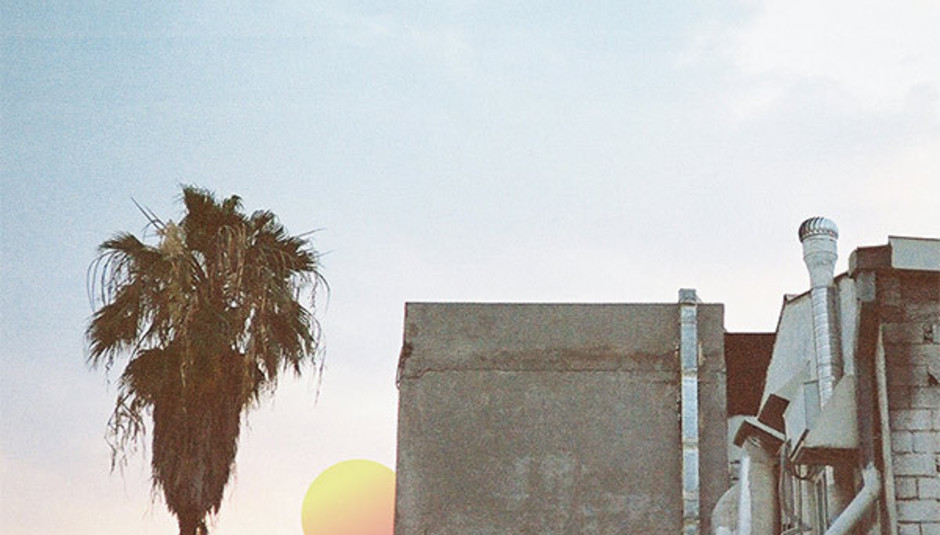 Oh hello, press release with the unfortunate but entirely forgiveable typo; we all do it, do we not. But when I read "Suitcase Man tells the story of a photographer who steels people’s faces and identities with his photos, and the problem he has with his own being.” I was a bit OH, DOES IT, NOW, DOES IT REALLY. Partly because I am of the opinion that you can do far more damage with a pencil than a camera, and partly because ‘problem with his own being’ is so wilfully inadequate a phrase when I assume it is meant to describe an existential crisis, I almost fell in love with it a little bit.

Alright there, how's you, haven’t seen you in aaages.

Omigawd yeah, I know, I had problem with my own being. I was in a right old tizz, but I got a man in to bang it with his splayed fists so now it's just the rash. Bit embarrassing, Doctor reckons I can put Zambuk on it.

As for ‘Suitcase Man’, when it begins it is all the doom in the world; quivering strings straight out of shadowy Vienna, Orson Welles managing to look sexy even as he reveals himself to be a calm sociopath untrammeled by silly, flimsy concepts like moyda; oh, whatever killin. Then the singing starts and it explodes into wonderful histrionics, with muted drunk brass, cantering cellos and some of the most ridiculously showy - if not actively vulgar - orchestration I have heard in quite some time. It is absolutely WOWZERS, it revels in itself, it reeks of DRAMA, and yet is still as pop as a thing could be. I had no idea.

I was going to illustrate this review with a picture of Eeyore the old grey donkey, such is the general delight I feel when listening to Mr. Rhys and his wonderfully huggable mantones of deject. Eeyore - if you can imagine it after being exposed to the abominational Disney version, which cutes it up so far to the MAX one starts to wonder what THE GIDDY HECK was wrong with the original – is the sort of cove who quite literally looks at his own reflection and says the word ‘pathetic’, twice, out loud. And he is continually raising an eyebrow, as hair-brained schemes are suggested by the likes of divvy Piglet and Owl (who chinny reckons he can spell but can’t). Rhys really IS one of those people who prompt you to wheel out that cliché about singing the phone book, his is a voice like no other and so very him; you don’t get many of those anymore and I always chain myself to those who do appear. ‘Shark Ridden Waters’ could be about tax efficiency measures or doilies for all I care, it has got the most aptly-named man in all of pop on it, and that means it is brilliant.

A rather darling videothing for a single I do not love at all. And I am trying, I interviewed Anita Blay once and she could not have been nicer. We talked about the pointless game-playing and deliberately-waiting-to-reply-to-texts-and-emails, merry dance of dating and she was the sort of person you just end up saying everything to, hairdresser-levels of Here Is My Life On A Plate. I really, really liked her, she had that extraorder mix of self-deprecation and breezy honesty I always find desperately appealing in you humans. Still, as I say, lovely video.

Look at Sleigh Bells, letting the side down with their frankly absurd good looks and perfect, flawless fuzz pop. I mean, I don’t know who they think they are; with their button noses, and their Raybans that suit their faces and their damnably sexy high school jock jackets worn over a schooliform. I mean, anyone would think that a woman like I, reviewing a single like this, fronted by a woman like that was having a hard time finding it within herself to like it, who-is-this-bitch-anyway. But because it is important to examine and prod one's knee-jerk reactions to women in indie when they are Beyonce-levels of attractive, I did. And insodoing, came face-to-face with some vile green sticky stuff that clung to my fingers like silly putty gone wrong, so I scrubbed it and scrubbed it til my hands were red and raw; shame, shame, SHAME. Then I realised how amazing ‘Infinity Guitars’ is, and how I will view those who do not like it - or Sleigh Bells - with a curious, knowing sort of suspicion. IT’S NOT HER FAULT SHE’S THIS FLIPPING BEAUTIFUL. AND I SAY THIS TO MYSELF AS MUCH AS TO YOU.

Trophy Wife describe their sound as ‘ambitionless office disco’, which I rather liked until I remembered how bands – and peepul generally – are so effing quick to proclaim their inability to work in offices, they don’t fit in, they couldn’t have a nine-to-five, it won't be borne, their rareness and non-conformity simply WILL NOT BE CONSTRAINED by your blue hessian upholstered wheelie chairs and your server rooms where heavenly, computer-logic-appreciating geeks fiddle with patch panels. Because offices are where The Man works, with his pesky RULES and TIMESHEETS and SENSIBLE BOOTCUT TROUSER SUITS FOR THE LADIES. Saying all that, I love it when people say such things to me, I cannot wait to pull a sympathetic, OH POOR YOU THE FLIPPING ARTIST face and just remember silently that it is the height of snobbery, especially when you don’t realise that the person you are saying it to spent 9 years in office administration and was perfectly happy; perfectly able to balance leading a fulfilled creative and joyful existence even though some hours of the day were spent typing pointless things into organisational spreadsheets. (Oho, it’s not a sore point, honest it isn’t.) Anyway, 'Microlite' is an ace single; as glassy as a retirement-celebrating crystal fruit bowl that will never feel the strange hairiness of pearskin or the cool sheen of an apple. It is more meditative than a thousand pootling, not-really-reviewing-the-music singles columns. Anyone would think I did it on purpose, chose the words and everything.

Even though I don’t really understand the use of a pseudonym if you are immediately going to reveal your identity, ‘Lina’ is very good, it is Toro Y Moi with his disco drugs on and they suit him, the raging eyeballs and white polyester and perilously fast heartbeat are no doubt making him wonder if this is what is meant to happen in exchange for twenty quid and a quick bit of pretend handshaking in an alleyway. An overlong sentence, yes, most assuredly, but what we are doing here is saying - in a roundabout and entirely lazy way - that 'Lina' is Toro Y Moi but DANCE. Notice how I say ‘we’ the minute I commit myself to a sweeping and not-very-helpful-description. The good stuff I claim for myself and take all credit for, of course. This is good, this cove is a polycove, he has skills.

I rilly, rilly like the cover art but sadly can’t upload it as we are a bit broken and it is not all over the internet like most things are these days, I have looked. To explain; It has a naked lady laid prone amidst some purplish mountains - and it is rude, yes, but it is not tarty. Like an Anais Nin novella strewn casually on a bedside table, just to make it clear that you know what sauce is, but you are not all Razzle about it. Even though I could argue there is a strange sort of honesty about a magazine like Razzle, it calls a spade a spade. Even when the spade is actually some tits. Good title, anawl, well done Midnight Juggernaughts. Video here.

Really, these are album offcuts, and strictly speaking there is no releasing going on, just pure munificence. Pure here you are, no-no, I really must insist, and how many times are you meant to protest before finally accepting that they will pay, thanksverymuch (and silently congratulate yourself on a freebie, feminism be damned, I think two, tops). But of course, when the persons doing the off-cutting are Norman Blake and Euros Childs, it is more Liberty than Ikea. Offcuts! Like fabric! DO YOU SEE.

I have always wanted to know what ‘on the lam’ meant because it also appears in ‘Two Little Girls From Little Rock’ from Gentlemen Prefer Blondes. Said song being wicked larks in every single respect mainly because it is Marilyn (and not the terrifying Jayne) who sings it. It is in the bit of the song where she reassures her ridiculously rich boyfriend that even while she is off in Europe she won't snog no one else, and as you can imagine, when Monroe sings a couplet about swanning off to the continent it is all drawl and no smalls, she delivers it like a slattern who always gives lolling 110%. Although, if there is any onehundredandtenpercenting going on in connection with this single, it is very definitely coming from Kele’s corner; he might as well be an entirely different man to the one that used to front Bloc Party and look vaguely apologetic. Has he just finally located his own essential skin and thrilled at how it feels to wear it, or is that just me projecting? And what does ‘on the lam’ mean, anyway? You were waiting for me to tell you. Greedy.

I can’t work out if ‘Hailing from Cardiff, Toy Horses have just returned from the US where they recorded their debut album with Wilco drummer Ken Coomer” is a bit like saying ‘Wendy Roby has just returned from Billericay where she had her nails done by Cheryl Cole's cuticle technician.’ As in, just a bit of an excuse to whop out a famous name. No disrespect to Ken Coomer you understand, he’s very good, Wilco’s ‘Hell Is Chrome’ came on the other day and made everything alright again, it was one of those Autumnal days where the sky looks like Dog has finally been to Dixons and made the switch to HD. But you must hadmit, as a PR snippet it is a bit, you know, drummery.

The Count & Sinden feat. Bashy - ‘Addicted to You’ (Domino)

…in which Bashy is brillopads. On an admittedly rather six-out-of-ten single. It's just a bit too trad, I think.

Pull In Emergency - ‘The Problem/Backfoot’ (Mute)

Mono Stereo - ‘Me And My Machine’ (Minty Highway)