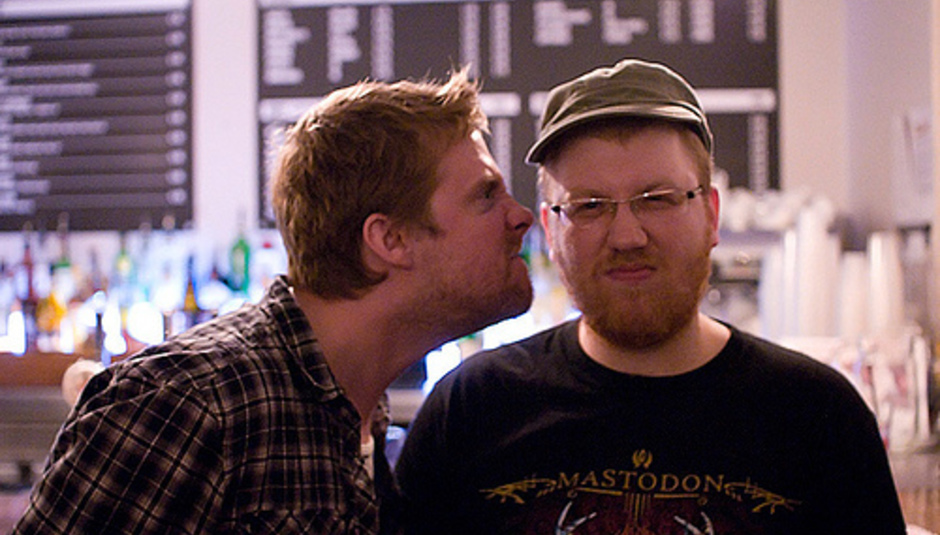 No Leeds day would be complete without a mixtape or two, and who better to share his musical highlights of the past 10 years than Whiskas. He's the man/force-of-nature who has been at the heart of the Leeds scene for most of the past 10 years, promoting gigs, playing guitar in Forward Russia, setting up the Dance to the Radio label, producing records and so much more. Over to Whiskas...

Recently something lead me to muse on some of "the best" bands that Leeds has seen over the last 10 years or so. I say 'the best' in inverted commas, because, it really is a very personnel thing. I have worn my taste on my sleeves with the output of Dance To The Radio, so the list that follows should come as no suprise re: it's relatively narrow focus, but if it wasn't composed in such a way, well, it wouldn't be my list...

1) Landspeed Loungers 'Paul'
Landspeed Loungers were a band around 10 years ago, releasing a string of singles regularly played on the Evening Session, John Peel's show and the like - although it took until the posthumous "...and now they really are all dead" album in 2005 for the majority of their output to be released. Loungers, along with Chest were two bands that had they been around a few years later would surely have reached a much greater audience than they did. Members of the Loungers, Chest and their compatriots went on to form Wrath Records in the early noughties, a hot bed for DIY indie releases in Leeds, of more later. Galitza, Being 747 and Portable Pony are some of the spin off bands entertaining us in current climes.

2) Lorimer 'Beauty Queen'
Lorimer were long time exponents of the best pop-punk tunes in the finest 1977-esque tradition, something that ingratiated them with the late John Peel, earning them numerous Peel sessions, before the great man passed away. Lorimer featured various members from The Pale Saints, and are mostly still plying their trade as Cyanide Pills, with a recent album of snotty punk hits on Damaged Goods.

3) ...And None Of Them Knew They Were Robots 'Division Formed Thus'
The early noughties in Leeds was a veritable hot bed for post-punk, emo, punk rock. And I mean the best kind with bands like Fugazi, Hot Water Music, Small Brown Bike all coming through the city, while Les Savy Fav and At The Drive-In both played in rooms the size of your living room. Locally, influenced by the awesome Collective AKA promotions and Fracture magazine, numerous bands forged an indelible imprint on me. While Bombed Out Records' Dugong, Joe 90 and Fig 4.0 were most renowned locally, the more mellow sounds of Pylon and later Nathaniel Green were among my very favourites. ANOFKTWR however were perhaps the most influential, their sonic imprint certainly being evident on bands like Forward Russia, This Et Al and The Lucida Console (now the fantastic Wot Gorilla?). After their initial self titled effort, and 2 albums of split ferocity, the band split, with 3/4 forming the highly acclaimed and immensely fun Zombie hardcore band Send More Paramedics.
http://www.myspace.com/andnoneofthemknewtheywererobots

4) Duels 'Sleeping Giants'
Duels for me are the stand out band of my musical lifetime in Leeds, given a rough ride by the industry and critics through a series of unfortunate occurrences. It was originally as SammyUSA they "caused a stir" locally, but having come acroper of one major label, their Duels rebirth through Nude Records was only marginally more successful. Despite recording albums at Rockfield and being produced by James Ford and other large names, it was their self-produced, self-released second album "The Barbarians Move In" that established them as indisputable genii.. Duels are currently working slowly on a follow up, but played the Imagine Festival in Switzerland earlier in the Summer.
http://duelsmusic.co.uk

5) Stateless 'Exit'
The band that went missing, but I'd hazard a guess you would recognise this tune. Similar to Duels, this band have been through the mill, but finding friends in DJ Shadow is nothing to be sniffed at. How this song didn't propel the band to massive things I will never know, and it has to be one of the best tracks by a Leeds artist regardless of fad or genre. Recently signed to Ninja Tune, the band have shown their scope by collaborating with Damien Martin (Bjork's producer) on their upcoming album, and enlisting My Brightest Diamond and The Balanescu Quartet to guest.
http://www.statelessonline.com

6) This Et Al 'The Loveliest Alarm'
What can I say. The musician's favourite band of the last 5 years and gone way before their time. The catalyst behind starting Dance To The Radio and a constant musical inspiration to Forward Russia. This Et Al were one of the hardest bands to pick one track by, and debate raged through Lone Wolf, I Like Trains and more as to which was the best. The answer is, there is no wrong answer, every song was a smash. For me, their final EP, released by Pulled Apart By Horses' James Brown, showed an even greater scope of where they could go, and the potential of a solo LP from frontman Wu is very exciting indeed.... http://www.thisetal.com

7) Kenosha "Track 3"
I don't know what this song is called - I have reams of title-less tracks by Kenosha, one of the great forgotten bands of Leeds, if not forgotten men. An obsession with Weezer matured to an obessession with Fu Manchu, then Kyuss. Three snotty kids who were playlisted on Xfm and banned from numerous venues, however, now fair dominate the Leeds music scene. The ubiquitous James Kenosha has turned into Leeds' own super-producer, helming records by Dinosaur Pile-Up, Pulled Apart By Horses, Grammatics and many more. Bass player Simon is in fact mostly responsible for Constellations Festival, being one of the city's foremost promoters, while singer Mike, now relocated to the south, is artistic director for the festival.

8) Little Japanese Toy 'I Sunset'
Little Japanese Toy are another band that if they were around today, would be lauded as the future of alt-pop. Except that's not quite true, because in Napoleon IIIrd and Mi Mye, their spirit continues. The first band to reach prominence from the Wakefield scene that brought The Research, Middleman, established cult venue Escobar and along with The Cribs influenced a host of young bands now ripping up the Leeds Scene. LJT were originally championed by Everett True, but a clash of directions led to a split in the camp with the two creative forces James and Jamie forming Napoleon IIIrd and Mi Mye respectively. Both have new albums out this autumn.

9) The Scaramanga Six 'A Song For You'
The aforementioned Wrath Records is the brain child and life works of the unstoppable The Scaramanga Six. Currently recording their sixth album, The Six have been mainstays of Leeds' throughout the decade, and reach far and away through Europe. Another band who's best song sparks an intense debate, they again have written some of the best songs out of the city, all in their own bombastic style. This track comes from 2005's Cabin Fever and as well as being a great song reminds me of a time and a place when everything musical around me was exciting.
http://www.thescaramangasix.co.uk

10) Kill Yourself 'You Are Good'
Kll Yrslf were noisy good-ness from Leeds mainly active until the mid-noughties when 'singer' Giles left for Glasgow to start Dananananaykroyd and Andy and James became That F*cking Tank. Mostly found performing in pants and masks, they were the closest you were going to get to seething Chicago noise and TFT's Awesome Magnet single with Giles was a joyous reminisce of what once was. There was a point in time where I could listen to Kill Yourself on repeat for hours. I don't know if this was healthy or not. http://www.armyofcats.com/oba/Bands/killyourself.htm

11) The Cribs 'Another Number'
A real anthem around 2004 when The Cribs garnered momentum, with singles on Wichita and tours with The Sleepy Jackson, their converted Police Riot wagon rolling from venue to venue, regular playing with a 'young' Kaiser Chiefs, 10000 Things and The Blueskins. I find it astonishing how influential they've become.

12) Wild Beasts 'The Fun Powder Plot'
Bringing things right up to date, this is my favourite track from the Beasts' Mercury nominated album for how it sounds as much as how good the song is. Two Dancers was recorded in Leeds and produced by Spaceman 3 collaborator Richard Formby who has had his hands on some astonishing records from Leeds over the year, most recently Quack Quack recent krautrock effort on Cuckundoo Records.

13) I Like Trains 'Terra Nova'
Another band it is hard to add anything on. I briefly considered including the track Stainless Steel, another favourite from around this time, that reminds me of good friends and good time, this song reminds me of mutual success and encouragement where a few of us were on fine form. I was very tempted to include a track from the Trains new album, as I think it has some of their cleanest work to date, but it felt too new. That leaves scope for you to check it out.
http://www.iliketrains.co.uk

14) Wingman 'The Skate Song'
I wanted to include one track for the future. Wingman is Harry Johns and pals who are definitely doing something fresh (as fresh as anything can be these days) and exciting to be around.
http://www.myspace.com/wingmanuk

15) Grammatics 'Broken Wing'
A fitting song to end on I think - again one of the best and most beautiful record/recordings this city and surroundings has ever produced. As ever, it's a near crime this band failed to attain any greater success, and in a similar parallel to This Et Al their later material only seemed to hint at more to come. After much debate on my part on which tracks to include, this is the only track to have been released by Dance To The Radio though I wasn't around to see it be released, which may well go down as one of the great disappointments on all sides.
http://www.myspace.com/grammatics

(*=while I've made an effort not to include any bands / records I have played on, I fully confess to having played onstage with members of at least 6 of these bands - from what I can work out, it may be more...)