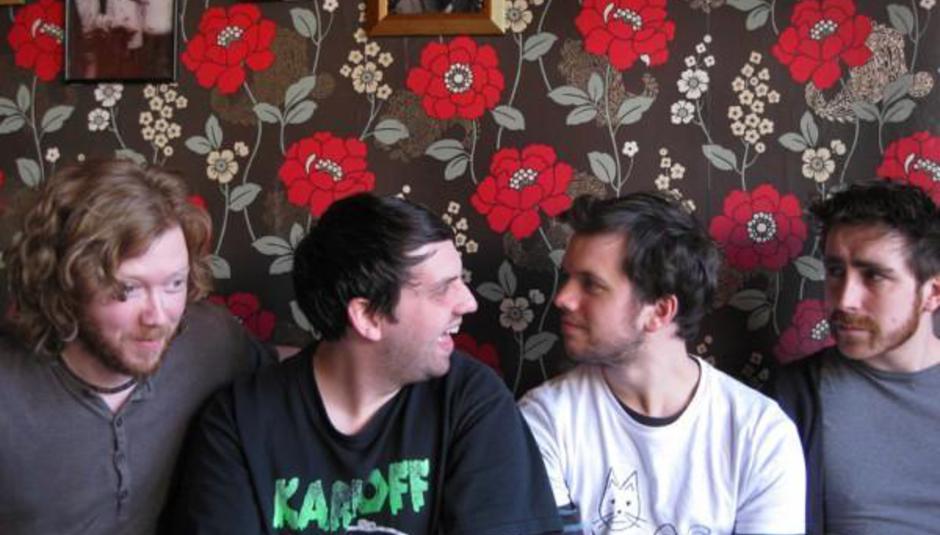 Back in October, we took a look at all the musical treasures Glasgow has to offer in our Glasgow Takeover, including a look back at a decade of Glasgow Bands, a chat with The Phantom Band, a paean to Scottish label Chemikal Underground, and we asked, just what is it that makes Glasgow's music scene so exciting?. We also spoke to Glasgow quartet Mitchell Museum about what makes the city so special...

Over the last year, Mitchell Museum have slowly pushed their way into the Scottish music scene’s spotlight. It’s been a surprising rise, given the insanity of the band’s early live outings. Each head warping affair showcased the Glasgow quartet’s definite potential, but also displayed a penchant for deranged, almost psychedelic, spectacles.

Since then Mitchell Museum have steadied the ship. Their illuminating debut album Peters Port Memorial Service was released to a tide of acclaim north of the border, while their live set has been honed into a well-drilled, hi-octane thrill of good-time sound. And, when those abstract predilections do shine through, they’re put to remarkable use – the self-produced video for latest single 'Tiger Heartbeat' is a fantastic acid-trip of beer guzzling robots.

We caught up with singer Cammy MacFarlane to find out what sort of impact the city has had on one of its most exciting new bands...

DiS: Since this chat’s part of DiS’s 10th birthday celebrations, let’s start with an on-topic question: 10 years ago what was on your stereo?

CMF: In 2000 Dougie was listening Sonic Youth’s Dirty, Raindeer [drums, vocals] was regularly spinning the Smashing Pumpkins, I was big on The Eels and Kris [bass, vocals] spent his mornings listening to John Lee Hooker.

An eclectic mix from you boys. I guess I shouldn’t be surprised. So, how do you think the city’s music scene has changed over the last year?

10 years ago we were just young kids living in fields and didn't really know much about any music scene. We were still playing in our very first bands and it seemed very exciting to be coming to Glasgow to play a gig never mind actually being part of a scene. These days jeans are tighter and haircuts are sillier.

Glasgow always quite a few jealous looks from other cities in Scotland - what do you think it is that makes the city stand apart, musically?

We think it is a bit of a fallacy that there is the Edinburgh /Glasgow divide in music. We've always had a good time when playing in Edinburgh and playing with Edinburgh bands in Glasgow. It seems more like a created tension to drum up some rivalry and hopefully a bit of inspiration. There are as many good bands outwith Glasgow as there are in it. Meursault from Edinburgh, Miniature Dinosaurs from Stirling, Fence collective from Fife, Copy Haho from Stonehaven for example.

Good point. But what kind of opportunities do you think being a young band, much like yourselves, in Glasgow gives a band?

We got a bit of a break winning the King Tut's [Wah Wah Hut] Your Sound competition when we first started out. Things started to pick up and we got a few shows down in London and some record label interest and generally a bit of a buzz was built around the band. Opportunities like this and the sadly now defunct The Mill gigs for new acts has really helped us out in the early days.

How much of an impact has Glasgow had on shaping your own sound?

Our inspirations come more from American and Canadian bands so we don't feel a massive influence is apparent to our music, but having lived in Glasgow for many years we are all very pale.

Not sure that’s just Glasgow affliction. Anyway, there’s seems to be an amazingly varied musical community in the city, but no real ‘scene’ to put a finger on. How important do you think this is in creating the thriving subculture that Glasgow has become?

There are lots of weird and exciting new sounds going on at any given time. Friends of ours involved in the Glasgow noise scene and are running their own label and releasing some very interesting stuff. There is also a thriving hip hop scene with Loki, Big Taj and Kobe Onyame. It's not just pale wee skinny boys singing about the rain.

So where do you think Glasgow sits in comparison to city’s like LA, Seattle, Manchester et al?

It's hard to pin down a particular point in time where the Glasgow scene has had such obvious influential effect like the Manchester Factory records era, but it has had various different success stories over a long period of time. It does feel that every now and then one particular Glasgow band gets picked for superstardom but there has always been a continuous flow of good music that is there for people to find.

Finally, in ten years time when DiS is setting foot in its twenties where do you think Mitchell Museum will be?

We'll be sitting in a slightly bigger van than we are in right now celebrating our tenth birthday, eating an oaties biscuit or whatever the futuristic equivalent will be. Hopefully we will an invite to your birthday party. If not, why not?