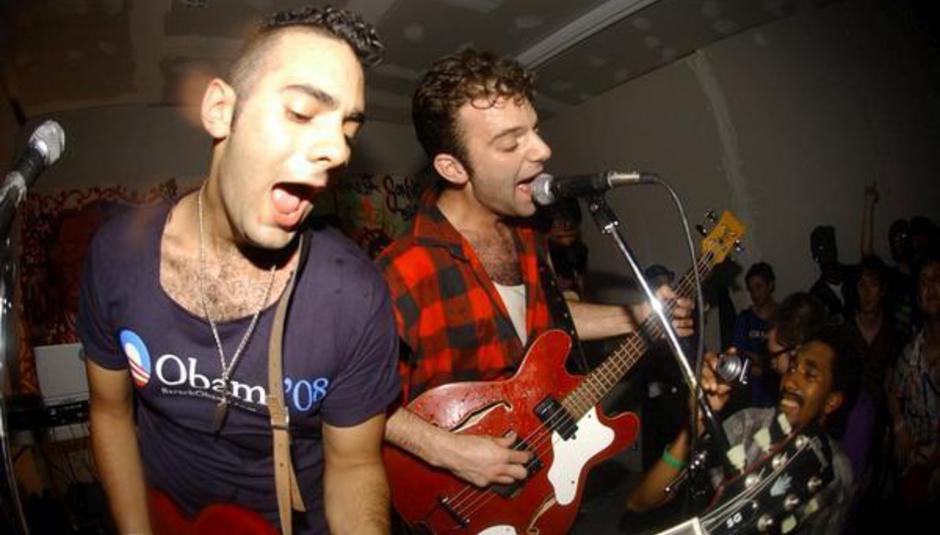 Until recently, university-aged indie rock fans in New York City haven’t had a lot of options. In a city that boasts dozens of clubs and venues, many under the age of 21 have been shut out of shows.

The drinking age in America was set nationally at 21 in 1984. The state of New York leaves it up to the discretion of club owners whether or not they include the underagers, as club owners would have to purchase specific insurance policies to cover the under-21 crowd, and could have their liquor licenses thrown into jeopardy if undercover cops were to bust underage drinkers, they have little incentive to be inclusive. This has been a major motivating factor for the DIY scene that has sprouted in Brooklyn over the last ten years.

“[People think] that we’re just trying to have the most wild illegal sort of party ever or something, which is often kind of sad because that’s not what we’re going for,” says Todd Patrick, better known as Todd P, who has been booking shows since 2001. He is perhaps New York’s best known indie promoter, having booked such bands as No Age, the Thermals, and the Fall in spaces ranging from his own venues to Polish night clubs to the high-ceilinged space above an auto body shop. “Not that having a fun party isn’t also good, but that’s not why we do it. We do it because we want the musicians to be able to play in front of young people who are legally barred from seeing them.”

The So So Glos have experienced this conundrum from both sides of the stage. Brothers Ryan and Alex Levine and their step-brother Zach Staggers grew up in Bay Ridge, Brooklyn, and were joined by guitarist Matt Elkin in 2007. The band found themselves sneaking underage friends through the back doors of Lower East Side clubs. They were additionally frustrated by the system of paying bands based on a tally of who came to see them, and, in Ryan’s words, “playing shows booked by some promoter who doesn’t care and won’t be there.”

The band began playing shows in the back rooms and basements of bars. Some of these shows were booked with the help of Joe Ahearn, who now runs the DIY venue Silent Barn as well as overseeing (with Todd P) the production of Showpaper, a 10,000 run bi-weekly newspaper listing all-ages shows in the greater New York area that cost less than $25.

While on tour in the US in 2007, the So So Glos decided they wanted to run their own DIY venue. “Seeing art spaces, meeting all these great people, we felt we had to reciprocate,” says Alex.

“What we saw on our first tour in America inspired us to do bigger things here,” says Matt. Bigger is the operative word: When they had returned from tour, Joe Ahearn was ready to show them what would become the Market Hotel. At 300 capacity, it’s the largest venue of its kind in Brooklyn.

Incidentally, Todd P had been eyeing the space for two or three years at that point, as he was with other potential show spaces, but had not been able to get in touch with the landlords. “The So So Glos…called the number and magically got someone to answer the phone,” he says. “And so they went and saw it and came to me and said, ‘do you want to be involved?’ and I said, ‘of course.’”

The So So Glos are no longer directly involved in Market Hotel; in May 2009, they opened Shea Stadium in conjunction with producer Adam Reisch. The converted warehouse space serves as a live room and recording studio, and Reisch records every live set, allowing bands to come away with a “Live at Shea Stadium” tape.

The Market Hotel, meanwhile, is currently dark. After a police raid in April 2010, the space needs to have various improvements made in order to meet various standards and qualify for the necessary permits to reopen.

Many of the DIY spaces in Brooklyn have a dubious legal standing. Some spaces are actually people’s homes, loft spaces and larger apartments that have the furniture shoved out of the way for bands to play. Some are commercial spaces the landlords rent knowing they will be used as “performance spaces” and that some of the artists will be bands. That does not necessarily qualify the venue to charge for admission or sell alcohol. It is also an open secret that some of the commercially zoned spaces are lived in, though the landlords aren’t amongst those in on the secret.

“Your neighbors and the local police precinct are the biggest things you have to watch out for,” says Bill Dozer, whose space, the Acheron, opened in May 2010. “The cops generally don’t bother you because they have bigger things to worry about,” he says. “Keep the face of your business clean.” The Acheron, Shea Stadium, and Silent Barn are all in commercial or industrial areas; with residential neighbours few and far between, there is no one to complain about the noise at night. Market Hotel, though parallel to an elevated Subway station, is in a high traffic commercial area, with cornershops and bars that are open well into the night. The circumstances encourage a police presence more so than shuttered warehouses.

Bill sees how spaces like the Acheron can create something permanent. Recalling shows at the residential McKibbin and Johnson loft complexes in the nebulous area called East Williamsburg, the schedules would have to be sporadic because of the neighbors. With this in mind, he is quick to emphasise the importance of running a DIY venue with the same professionalism as a commercial venue. “Make sure shows start and end at the same time. Make sure the bathroom is fucking clean,” he says with a laugh. “When you’re working at a show the first thing is that you’re at work.”

The future of DIY venues in Brooklyn could be shaped by the progress of the Market Hotel Project, the vehicle for getting the space up to code and securing its non-profit status. The Market Hotel would not be the first venue in the city to accomplish this -- former punk squat ABC No Rio on the Lower East Side has non-profit status, as does ISSUE Project Room, an art and performance space in Brooklyn that caters to avant garde tastes. Both venues have acquired million-dollar grants from the city. Non-profit status would help protect the Market Hotel against sky-rocketing NYC rent prices, and hopefully create a lasting community space.

“The idea of sustainability is really the issue here,” says Todd. “That anyone can use at a low cost, that other promoters and organizers can come in...it will not be mine then, it will be run by a board, and hopefully served by and serving the community. So trying to create a framework that makes it easier for folks to keep this going after we step out.”

If there is a competition of DIY-versus-commercial-venues, within the scene there is less competition and more community. In addition to the listings in Showpaper, Todd P offers a comprehensive list of promoters in the NYC area who book all-ages, DIY shows on his website. Recognising the attention he gets as a promoter, he is also keen to those who were already booking shows when he first moved to New York. Russ Waterhouse, lately of the Philadelphia band Blues Control, and visual artist Kyle Lapidus of the duo Lovid were both booking shows in the early 2000s, as was John Fitzgerald who started the Mighty Robot space (now Secret Project Robot, and where Todd P’s Monster Island Basement is located), who Todd P cites as “the one who got the idea of these things, of good shows happening in Williamsburg. Previous to that, there were shows happening in Williamsburg, but they were, yeah, whatever. He started doing the great stuff.”

Bill Dozer, who currently plays with Attake, and the So So Glos, has recently completed a US tour with Matt and Kim, have learned first hand what to expect as a band and what to offer touring bands. Bill, for example, uses outside promoters as well as booking his own shows at the Acheron, is very clear with bands about what money is being taken off the door. “If the bands are happy with the show, it’s us,” he says. “If they’re happy or unhappy with the way they’re paid, that’s the promoter.”

Todd P remains adamant that anyone could throw a show, and makes no illusions of the simplicity of the process. “If people see us setting up, they see how set-up is done. And they realize sort of how unpretentious and uncomplicated it is,” he says. “And I don’t mean that our stuff is uncomplicated, I mean that all set-ups are uncomplicated.”

The So So Glos maintain that bands shouldn’t be discouraged if they can’t get a show at the increasingly popular Shea Stadium. They hope to see more venues in a similar vein. “The more places there are like this, the more shows,” is Matt’s logical opinion.

“If you can’t get a show here, throw your own show,” is Zach’s advice. “It’ll keep going on, and it should go on.”

"My Block" - The So So Glos from Matthew Greeley on Vimeo.

The Insider: Dear Paul Morley, IF YOU...