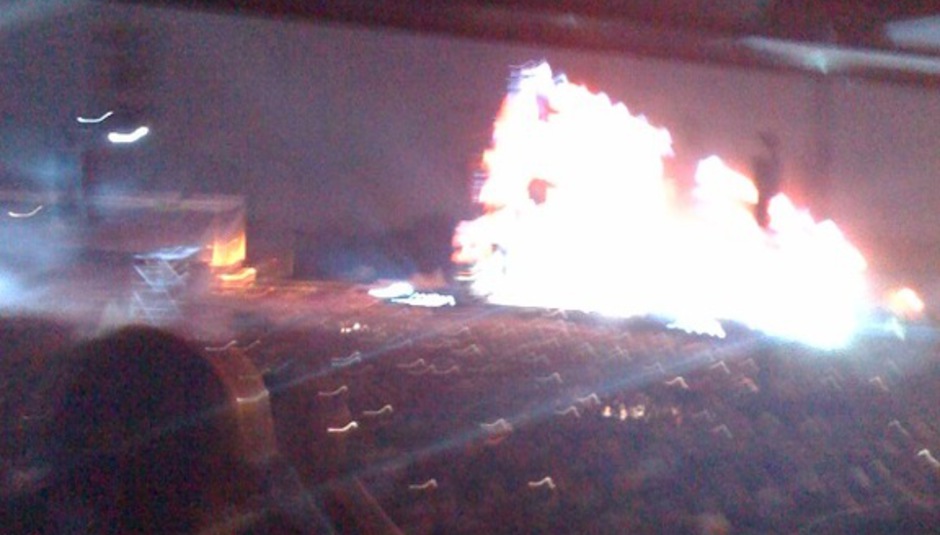 Because I am abominable, monstrous, many months before seeing Muse, I have already decided what I am going to write about them.

‘ANY MUSIC THAT APPEALS TO PARANOID AND OVER-SENSITIVE TEENAGERS IS AUTOMATICALLY IMPORTANT.’

…is what I say to a friend.

‘ANY BAND THIS RIDICULOUS IS A GIFT TO A WRITER.’

…is what I say to another.

'EVERY MUSE SONG - EVERY SINGLE ONE - IS ABOUT THE MAN. AND THAT IS AMAZING.'

‘ANY ONE WHO DOES NOT LIKE THEM IS WRONG AND ANTI-FUN.’

…is what I say to myself. My friends having (quite rightly) decided that Wendy has gone a bit wrong.

Then there is the wait for the ticket. It is a long one, and there is a lot of wrangling despite lots of very nice people helping me. At this point, I decide that if I do not get one, I will instead write a high-concept harticle from outside the stadium. It will tell the reader just how miserable life is if you are not at Muse; how to see the tips of the lasers - but not the lasers themselves - is the saddest thing. The fact that that I can see this quite clearly in my woman-mind (crouched on a bollard like Rodin's Thinker; no friends, no friends) probably tells you quite a lot about me.

In any event, I find out the day before the concert that this thing is on, I am in. By this time, I have already formulated some vox pop questions for THE FANS. The best one, or so I think, is:

‘Excuse me young man, but can I ask how paranoid you are on a scale of one to LIZARD?’

Someone suggests I put forward a case for ‘Supermassive Black Hole’ actually being about a subsidence problem in Matt Bellamy’s back garden. And do you know, I am not sure I have ever been smugger.

All these trinket thoughts are dispelled, however, the minute I get on the tram. The tram is a jam; it has too many people on it and everyone is going to Old Trafford. The three enormous, burly men I am wedged up against have home-made tattoos. They are making jokes about Josef Fritzl. This compels one of them to sing The Jam’s ‘Going Underground’. It is all quite rum. These men are MASSIVE. And I am not in Indie anymore.

Undaunted, I skip across the arena for Pulled Apart By Horses with joy in my face. Before I am even halfway across the wide flatness, I have to stop and make a note. 'Rumbliest, noisiest, most thunderous drums,' is what it says. James is wearing a Dawn of the Dead t-shirt. Tom is wondering out loud what-the-naughty they are doing on this enormous, Borg starship of a stage. But the wonderful thing is, it is already packed, and though they are doubtless playing to a crowd who hardly know them, it takes seconds for us to be won over. Tom does not so much sing as squawk, but there is yelling in there too. ‘Squelking’ just about covers what he does, but there is a surprising daintiness (that I will be sacked for noticing) in the backing vocals of ‘Yeah Buddy’. 'We're just a bunch of tramps who don't know what's going on,' they say. And then a beefy Dad who is passing and leading his family closer to the stage says 'I feel like I'M being pulled apart by BLOODY HORSES.' Which is very Daddish, and very ho-ho, so we all laugh.

By this point, I am starting to feel a bit funny. It is part fear, and part burgeoning giddiness. You see, sometimes (and not very often) when you go to see a piece of entertainment something wonderful happens. It is when the people on stage are doing so well to extol the virtues of performing (or in PABH's case, being in a noisy, hell-spawned rock band), that you want to be a performer too. The fact that Pulled Apart By Horses do this to me - when I know full well that I tried being in a metal band at 17 and was absolutely rubbish at it, should tell you just how brilliantly larksome they are.

And then I have to do some more waiting.

I have never wanted the sun to go down this much.

But eventually, eventually, darkness falls. And I am outside the stand talking rubbish when I hear and suddenly realise that It Is Time. So I run, hard and fast up all these bleeding stairs and belt outside. Which is when it really hits me just how extraorder tonight will be; despite my grand imaginings and capacity for Building Things Up, there will be no disappointment. There are 50,000 people here. And they are all singing about ‘TRUTH CONFINED’ and ‘RED TAPE’ and how they will not ‘BE DEGRADED’ or ‘CONTROLLED’; how instead they will be 'VICK-TOOOOOUR-EE-USSS'. Matt Bellamy is wearing a suit made of sequins that at first seems to be made of an oily black rubber, but this depends (as do ALL THINGS IN LIFE) on the lasers. As for me, I am literally jumping for joy; sheer unstinting happiness propels me up and down.

Muse do ‘Supermassive Black Hole’. I notice that there is a pattern on their drum kit and I will admit that - just for a tiny, dread and fleeting second - I think about how it looks like the sort of premium, pahtend flock wallpaper that people put on one wall in an attempt to appear modern. You know, like this.

But I do assure you, this thought-blip lasts mere milliseconds. Because now Muse are doing ‘United States of Eurasia’ while complex logarithms, archaic texts and formulae flash on the big screens. I wonder if there is a formula for The Man, and become convinced that if it do exist, Muse will know it, off by heart. Then there are spirals within spirals on the screen, as I think about how wonderful it would be to be able to fly; and how I would swoop over all these heads as Matt tinkles his expensive ivories. I have only had two ciders. Then they start to play part of their Symphony of the Ridiculous from The Resistance, and huge plumes of smoke erupt skyward. They do The Vienna One (1). I write down ‘BLIDDY HELL ETC’ [helpful, helpful] and note how there are ‘rainbow ovals of light, like peacock feathers’.

To be quite honest, I’m surprised I can read any of it back.

It is apt, therefore, that they play ‘Hysteria’. Which is when the BIGGEST STREAMERS I HAVE EVER SEEN explode from somewhere in the middle of the arena. I really do nudge the man next to me, who I also do not know, and really do say ‘Will you JUST LOOK AT THAT!’ The streamers are red and white and the wind blows them far and high across the plains of the arena. Some get stuck in one of the lighting towers. ‘They will be a right bugger to get down,’ I think, and notice how Dominic Howard has a big fat grin on his face. And well you might, Dominic Howard, well you might.

And then, right, I need the loo, it can’t be ignored. ‘I need to go to the loo!’ I shout in the face of my companion, as if she is able to do a thing about it / could care less. We both know I must dash - and this is fine, good - but there are two ladies of a certain age in tailored baby-pink leather jackets, and their plumptious bottoms are taking up the WHOLE OF THE STAIRCASE. ‘God, God, God, hurry, hurry, hurry!’ I am thinking but not saying because I am not rude, even in the midst of all this hugely affecting pomp. But then I see they are wearing FIT FLOPS and I have to barge past. ‘Sorry!’ I call back over my shoulder. But really I am thinking ‘WHAT ARE YOU DOING, GET OUTSIDE’. I mean, these ladies are wearing the most shocking footwear ever invented, and if anyone is in need of a lecture tonight about mind control, it is definitely, definitely bloody them.

When I get back, Muse are doing The Gershwin One (2). I put my right palm up to the sky like I used to do as a teenage evangelical, but this time Dog has nothing to do with it. There are visuals of Churchill [WAR IS BAD DO YOU SEE] and shadowy operatives, darting about Eastern Block cities. They do 'Feeling Good' and there are more lights than ever. This many: They do ‘Starlight’. Everyone sings. They do ‘Unnatural Selection’, which is when the word ‘TRUTH’ flashes up in enormous red letters, taking up the whole side of the stage.

Matt Bellamy wants it, and I want him to have it.

I WANT THE TRUTH TOO.

Then, there is an encore. My notes are hazy, indistinct now, but I definitely write down something that seems to be about how People Who Do Not like Muse are annoying. To express this, I scribble ‘Poppycockers!’. Then there are lasers that look like those pin-wheel pictures from the olden days of the seventies, each one framing one of the band. There are planet-sized, perfectly spherical white balloons with eyes on them - THEY ARE EYE-BALL BALLOONS, THE EYES ARE EVERYWHERE - drifting over the audience. And then Matt does a solo on a rising platform that looks like a space ship and his suit is made of neon and I spill my cider. And then it ends - though I am praying, pleading it won't - with Bellamy's cacophonous man-wail. He is spent, because truth is tiring.

I never want to see an earnest indie band EVER AGAIN, for as long as I live.


Wendy is on Twitter, here, when she has calmed down a bit. Sorry about the photographs.