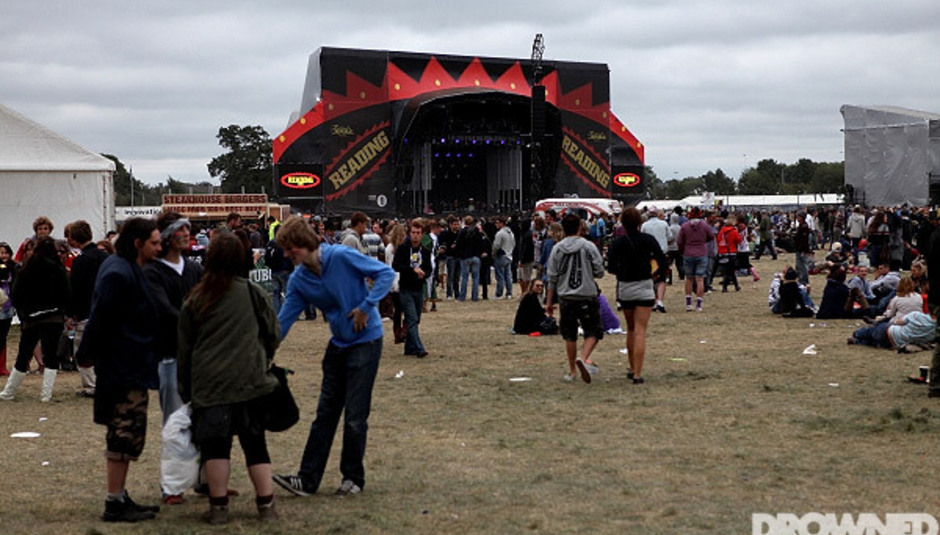 In anticipation of that glorious stench-cloud of burning paper cups, teenage tent sweat, burger belch and beer froth, DiS has compiled a Spotify playlist but first, here's a little list of 10 acts you really, truly, should try to catch this weekend at Reading (or Leeds) Festival...

Queens of the Stone Age

We realise this is stating the ruddy obvious but Josh Homme returns to Reading for the 666,000th time. And this time it's serious! Oh yes, Rated R, in full, is what is promised. And maybe, just maybe, we'll see the real reunion of the weekend (Liber-what? Liber-bovvered?) and he'll be joined by Nick Oliveri, who recently postponed his US tour dates. Not that we're into starting rumours or nuffink.

The makers of DiS' album of 2009 are on fire at the moment. Taking the stage moments before LCD Soundsystem (who obvs you should watch but he's headlining so that sorta goes without saying) you're in for a treat of Gallic pop with a dash of electro and gallons of cool. We can only hope they bring out the lazers for 'Love Like a Sunset' or at the very least actually play it!

Long-time DiS favourites Blood Red Shoes have always been a 'must-see' live band. Laura-Mary and Steven seem to keep getting better, louder (the guitars sounded like a helicopter landing at The Great Escape) and ever more intoxicating. With several months of daytime Radio 1 support and a track on the Scott Pilgrim soundtrack, you might wanna turn up a fair while in advance as this is one set not to miss.

We never imagined anyone could take all the best bits of Sufjan Stevens, throw in all the computer-game textures of The Postal Service and manage to make music quite so irresistibly more-ish. Their live show may be in its embryonic stages but the songs are on a course set straight for your heart.

Dogged by Bright Eyes comparisons, maybe but those who've ventured beyond the hint of (over-)emoted drawl have discovered one of the most exceptional young songwriters to release a debut album for quite some time. We really wouldn't be surprised if he wins The Mercury Music Prize, nor if you came away from this set buying tickets for his next three tour dates.

Yourstru.ly Presents: Villagers "Home" from Yours Truly on Vimeo.

DiS had the absolute pleasure of hosting a stage at Summer Sundae last weekend. We booked Futureheads to headline knowing how good they were last time we saw them and how many of their songs have touched our hearts. What we didn't realise is that they have developed into one of the finest live bands in the UK and managed to morph their charming indie-pop into some sort of bruising punk-rock'n'roll Popeye punch. You'll be singing along to songs you've never heard before by the second chorus and find yourself still oh-oh-ing the following morning.

Probably the greatest force of nature in live music since At the Drive-in? Is there really a probably about that? The drummer, oh man, the drummer...

On record they sorta sound like Vampire Weekend minus the Paul Simon. Live they're like Radio 4 playing at your greatest ever house party whilst channelling some crazy voodoo that gets everyone, even crossed-armed nerdy DiS writers, dancing like utter-utter idiots. Nay-dean, nay-dean, naaay-deee-eee-eee-ean... MORE COWBELL!

There was a time when you physically couldn't bring a computer on stage. In that world, long before white apples shone from pristine MacBooks, there was just a stage (wo)men, strings and cabling. Sure, now, you can still see some retro-rockers playing bar-rock, dainty folksters or retro-futurists channelling David Byrne but you'll also see some so-called "dance" acts. With the latter you will find yourself essentially gazing at some dude pressing play whilst an incredible light show distracts you. You can also go see Caribou and see a bunch of fellas man-handling technology, wrestling the digital revolution to the floor and, they'll take you on a journey until they have you amid the tempo shifts and echo chambers, then they'll stop, leaving you begging for more. To put it another way, essentially Caribou are exactly what you expected to see after reading about Hot Chip and, if the sound and mood is right, the exact band festivals were invented for falling in love with and shaking your head furiously, thinking about your mates who missed this in favour of some dogshit hype band who won't be around in 6 months time.

You could go watch The Drums and leave disappointed. Or, you could be reminded that you once loved Aerosmith and Weezer and Rolling Stones and god knows what else it is that these truck-stop party starters have going on. Leave your cynicism at the tent door and throw them surnburnt arms in the air.

Also be sure to catch: Paramore, Weezer, Warpaint, The Cribs, Frankie & The Heartstrings, Ash, Metronomy, The Get Up Kids, Crystal Castles, Foals, Wild Beasts, Los Campesinos, Yeasayer, The Joy Formidable, Four Tet, Everything Everything, The Walkman, a random emo band in the lock-up tent and y'know, anyone else you wanna see.

If you've got a Spotify premium account, an iPod and a cable to attach it to your car stereo, then you can blast this on your way to the festival. If you haven't got any of those things, you can still listen to it, at your desk, via Spotify by click-clacking your mouse here and it'll have just the same 'get you in the mood' effect. Hopefully. Unless you're not going, then it might just make you jealous. Unless it's raining heavily, of course.