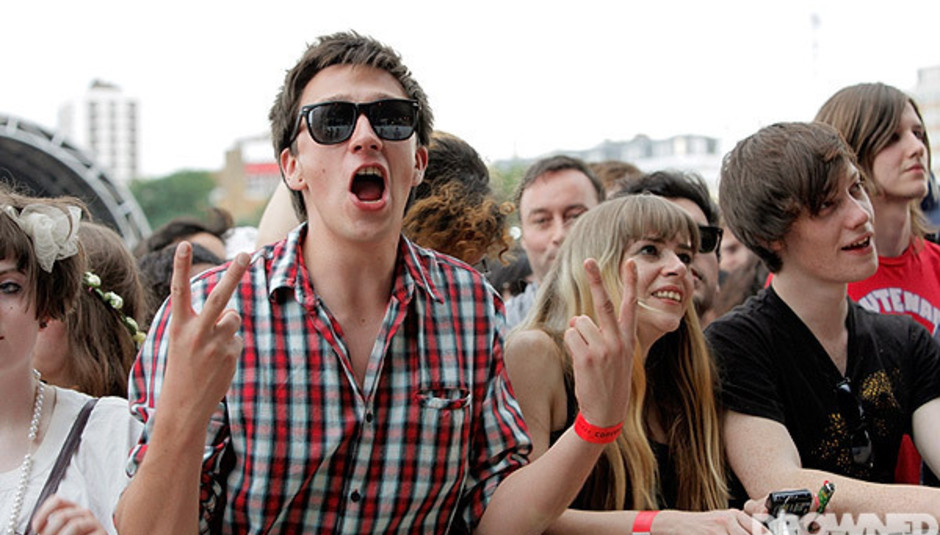 The weekend before last, intrepid DiS-ers Marie Wood and David Renshaw went to Shoreditch Park to observe local rituals. Here are their findings.

1234 festival in Shoreditch Park is the epitome of a hipster happening, but it’s also come out as the best festival in East London this year. Sure, it’s a scenester’s paradise – there's nowhere else that you're going to see so many malnourished limbs crammed into leather shorts and billowing white shirts as pin pricked eyes gaze over vintage wayfarers. But, what makes 1234 so great this year is the line-up that frankly pisses all over usual east London festival kingpins Field Day. With Peter Hook, These New Puritans and Fucked Up all headlining we’re pissey pants excited, as in catheter pissey pants excited.

You can tell instantly that you’re in Shoreditch, as the VIP queue snakes around the path outside the main gates, while the normal punters walk straight through the main gates with ease. After grabbing our press pass and an overpriced cider we head for the Rough Trade Shops and P.I.X stage to catch Spectrals, only to see they’ve mysteriously disappeared off the line-up sellotaped to the side of the tent. With no clear signs as to which tent is which, we’re left few scratching of heads and wandering aimlessly around on a Where’s Wally? type hunt, until we discover they’ve cancelled. Instead, we sprawl out in the already scorching sun in front of the Converse main stage to catch locals Trailer Trash Tracys. Pulling in a large crowd, the band’s velveteen bass and honey rich vocals unfortunately gets lost in the mid-afternoon haze, with the PA struggling (as it does for most of the day) to cope with the band’s rich sound. Despite the band probably more being suited to the dark caverns of one of the tents, they still deliver a charming set, the seductive decadence of ‘Candy Girl’ and ‘Strangling Good Guys’ a welcome diversion from the sweaty summer heat.

We dodge the Koppaberg ladies on bikes lobbing, super ripe, rock solid pears at various punters, to head back to the welcome shade of the P.I.X tent for Mazes. Today they’re a duo rather than a trio, rejecting stage protocol as lead singer Jack stands side on to the surprisingly full tent. At first they’re dogged by a few technical difficulties as Jack’s guitar stalls in the opening of ‘Cenetaph'; but once the guitar's been fixed by a bemulleted roadie, Mazes show us effortlessly how you can take the splinters of the Pixies, Smashing Pumpkins and Pavement and craft them into a something beautiful and new.

Brooklyn’s Von Haze’s set, on the other hand, makes you could pick up those splintered bits and ram them into in your eye balls. After a ridiculously long sound check, the band pump out ‘Sooner Or Later’ setting the tone for the rest of the set, as the minimalist vocals and dirged loops clash with the bright sun cascading into the tent. After a few tracks, it feels like you're listening to The XX doped up on valium, with the only people who seem to be kinda enjoying being here the band themselves, and they sort of look like they’re thinking about what to get for their mum from duty free on their way back home. As the more and more people leave, it makes you feel that some things are best left online and not out on the road. Staying put in the P.I.X/Rough Trade Tent we wait for A Grave With No Name. After a slightly iffy set in an almost barren 93 feet east at Stag And Dagger earlier this year we’re feeling a bit apprehensive, but there’s no need. The dense feedback howled from each _Mountain Debris_ track forms an engulfing fog across the tent that makes you forget all about the blistering heat outside. The audience actually stays glued to the spot, with lead singer Alex Shields gushing modestly: 'Fucking hell, it’s busy'. They even slip in a new track that has the heavy hypnotic rhythm of Weezer’s hash pipe. Leaving the stage all too soon, Alex says 'Everyone hang around after for *Comanechi. Their singer’s a dick'. Making us wonder what’s exactly gone down back stage with Comanechi’s Akiko. For some reason Dum Dum Girls have been shifted from their second stage slot and placed on the main stage to play to a disinterested crowd waiting for Peter Hook (more on him later). They don’t let the sunshine deter them, even if it does make them look like the most over dressed people at the beach ever. The band, led by lead singer Dee Dee, live and die on the strength of their melodies as fans of their brilliant debut ‘I Will Be’ can testify. These moments of synced up beauty are few and far between this afternoon however as harmonies go astray and, like wheels missing their grooves, just end up grinding. That said, ‘Jail La La’ and the Breeders-esque ‘Bhang Bhang’ show that when Dum Dum Girls hit their stride they have the wherewithal to be as good as anybody else on today’s bill. Nathan Williams quickly shakes off any preconceptions of him being a coked up, over hyped waster in the first few sugar hit high bars of ‘King Of The Beach’. Wavves hurl themselves at all the new tracks with ‘Linus Spacehead’ coming on more bloody raw than the processed loops of the album and ‘Green Eyes’ taking on an extra dreaminess as the sky turns a crushed orange. They close with ‘No Hope Kids’ - one of the few tracks played from their debut.

Peter Hook jokes are too easy to write, especially when he continues to do thing like perform the entirety of Unknown Pleasures minus any members of Joy Division but with Rowetta and a man in camouflage combat trousers on guitar. Quite why Hooky insists on doing this is hard to fathom. On the one hand people do want to hear it as the large and vocal crowd gathered testify, but surely there comes a point in your life where you consider your deceased friend and band mates' wishes over nostalgia obsessives. It’s not even good musically, as Hook takes the sombre, dark introspection of the seminal album and turns the songs into fist pumping road anthems complete with a bizarre chirping noise he insists on sticking in between vocals. The jokes come thick and fast (Ian Curtis is dead, why kill him again? Who’s that on percussion? Ian Curtis spinning in his grave) but the sad truth is that no joke is bigger than the man centre stage and he’s knocking them out quicker than Jimmy Carr.

Nostalgia leaves a bitter taste in the mouth so we turn to the future to cleanse our palettes. Flats, currently warming their hands on big blog heat, however are possibly not the best choice. Watched on by members of The Horrors and The Big Pink, this is Shoreditch in a crystalline form and as four skinny kids take to the stage to blast through sub-120 second bouts of anger and punchy aggression things seem promising - for a while. On the plus side Flats energy is a welcome kick up the arse to an underground that presently seems perpetually stoned. They genuinely seem unapproachable and singer Dan Devine has the air of a man who would kick a kitten. Unfortunately for him he also looks quite a lot like Alex Turner having a tantrum and, along with his similarly young chums you wonder just what they are so angry about. I mean you can get from Shoreditch to Dalston in under ten minutes now, there really is very little to be angry about in East London at the moment.

Adding intelligence to their aggression however are Rolo Tomassi, a band who are in their own mosh pit within the space of two songs. Due to a tight schedule we miss the majority of their set (sorry guys!) but it’s safe to say that this video pretty much sums up everything that is amazing about Rolo Tomassi right now. Any regret at leaving Rolo to slay their tent is soon shaken when the ramshackle beauty of Vivian Girls come into view. Their clatter punk rolls out nicely, but it is the melodies that hit the sweet spot tonight. Playing one of their first shows since drummer Ali left to join Best Coast, full time remaining members Kickball Katy and Cassie Ramone are joined by new drummer Fiona and are clearly looking to the future. Two new songs ('The Other Girl', 'Dance If You Wanna') are debuted, seriously whetting appetites for their next album.

Veronica Falls' set is a late evening blast as their obsession with all things morbid meets a winning pop sensibility. ‘Beachy Head’ rattles along at a blurry pace and with the force of the contender for single of the year it must be. Elsewhere ‘Found Love In A Graveyard’ and ‘Stephen’ rival one another for spectral beauty.

The anti climactic end of These New Puritans' set being pulled due to sound difficulties puts a low on an otherwise high of a day, but 1234 still proved you can be all style and a very decent amount of substance.

In Photos: Biffy Clyro @ The Roundhou...