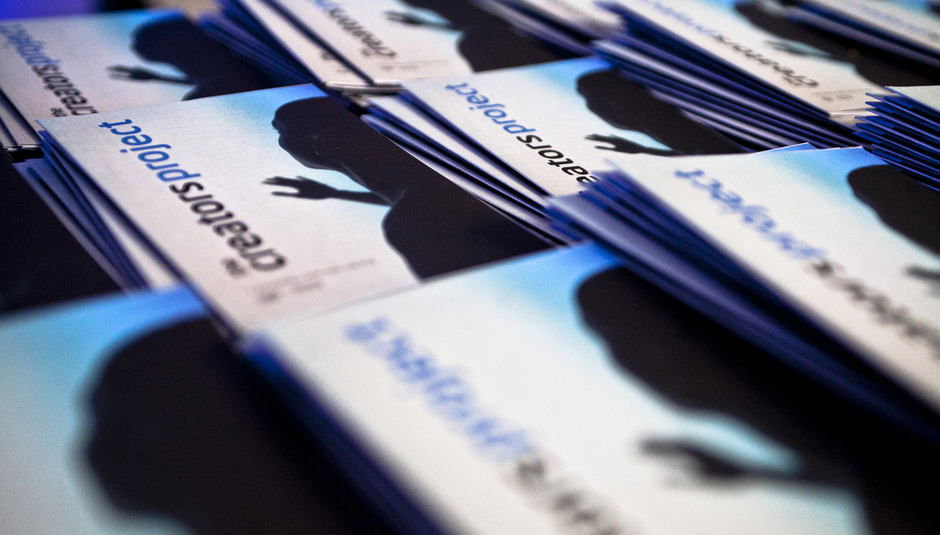 By James Lawrenson and Daniel B. Yates

The Creators Project is “a partnership between Intel and VICE that brings together innovators across disciplines and explores the different ways they use digital technologies to further their artistic pursuits”. Or more plainly, a series of parties / soirees / junkets that takes place across five world cities: NYC, London, Sao Paolo, Seoul and Beijing. This event, in the monolithic Victoria House in London's Bloomsbury, brought together art installations, bands, DJs, films, panels, presentations, and games.

In the spirit of modern collaborative creativity, the review takes the form of a dialogue via email and instant messenger between the two DiS writers who attended.

DBY: So yes, now I've been thinking about yesterday, and realising I don't remember very much. I put this down to three things. Firstly, the whole event had a sort of hyper-real gloss. It was thrillingly "contentless" in a way, a lot of sheen, a lot of hyperbole, logos, images of logos. It seemed to be designed as an experience that passes straight through you - a sort of experiential diarrhoea. Secondly, there wasn't all that much physically there. Thirdly, plying "creatives" with drink helps them forget about the struggles of monitoring their trust fund and the painful shift from checked to striped shirts, but also about saying anything interesting..

JL: I felt like our conversations became “postmodern” and “existential” very quickly. I quite often felt like a character in a Tao Lin story. If you can call that creative, then the event was successful.

The exhibitions/installations could be wandered in a casual hour (not necessarily a bad thing), leaving you with the panels, presentations, and, later, bands and DJs. Did we start too early? The hype suggested some kind of hyper-interactive bacchanalia, creativity dripping from the walls (unlike the sweat in the unventilated auditorium) and yet, and yet... there was just not that much there. If one peruses the line up for the New York event, it seems the Big Smoke is less of a draw. Guests at NYC – M.I.A., Interpol, Salem, Gang Gang Dance, Animal Collective. Guests at London – Kele, one of The xx, Tinchy Stryder, Yuck, Jammer from Boy Better Know. Alright, we got Peaches. Before we get into theorising more deeply about the event, which shall we deal with first – the good, or the bad?

DBY: On the musical side of things I thought the Peaches DJ set was fun, all those clattering snares and roasting booty bass took me back, the fact she was doing it with a broken leg propped up on the turntable was butch as fuck. It was great to see ex-Pipette Rose Elinor Dougall come out with Mark Ronson, and liven up things with her English Rose wilting in a Texan diner thing. Ronson's funk cover of Radiohead's 'Just' I could forget, and Yuck I already have, but I'm sure when I next put on Daydream Nation I'll remember them... Or maybe not...

JL: Don't forget Ronson's new single though. 'Bang Bang Bang' is a great pop tune, and that is the end of it. The rest of the set, unfortunately, was forgettable. Hopes raised, and duly dashed. And if you thought hearing 'Valerie' one more time was bad enough, how about if it were sung by the lead singer of The View?

Yuck are fine, I think. They have influences, sure, and those influences go as far as turning them into a tribute act, sure, but they are... good. Not deserving of all that hype though (who is?). My favourite, though, was Felix Thorn's automated bedroom-built machines by the door. Trippy little acoustic rhythm patterns played out on contraptions of de-constructed pianos and drums, all springs and hammers – I could have stayed there all night. Installations / exhibitions / good / bad?

DBY: Yeah, that was amazing, like a BMW advert directed by Russolo. UVA are good but weren't so well-represented here. I really liked Radical Friend's (promo directors for Black Moth Super Rainbow among others) cybercultural temple, an enormous plexiglass cone flanked by candles and immaculately coiffured doormen. Those who ventured inside were sat down and scanned, and their face would appear on a large circular screen at the top, rendered in molten FX, like a sort of Gibsonesque Lawnmower man. It was a pretty awesome spectacle, a digital ritual gatekeeper, and seemed to speak of the event more broadly - In that it was all about working up tech exclusivity, tech cool, sort of countercultural tech. I was half-expecting TED with haircuts, but the language was different, it wasn't about rationalism. It was more about mystification, impossibility rather than possibility. Old cybercultural and hacker narratives repackaged into high fashion. When Eddy Moretti was talking about some pretty standard equipment onstage saying stuff like "you can't even get this shit, don't even ask us what it is" he betrayed the essence of the thing; it's Vice working up its myth through tech, jacking vast sums from Intel corp to do it, and having a big party. Which is fine but... y'know... call it a Vice party.

JL: It was hard to ignore the corporate aspect of it. If anything, the event suggested that creativity cannot thrive without having some donor to support you – i.e. the Red Bull Academy. But that's the way it's always been – patrons have always been important to the arts. They never went away, they just set up companies. Shed tears for the bedroom musician, there is no hope for them. I'm not sure if that was the positive message of creativity that they wanted to send us away with. There was a (slightly unengaging) presentation from Joachim Sauter, who showed some amazing videos of things he's done for Mercedes etc, in particular a mesmerising kinetic sculpture of steel balls on cables (much better than that sounds). It was a shame it was only a video – it would have been great to have the real thing there. A lot of the presentations seemed to be less about the creative process, more about showing what you'd done. I had hoped for some kind of examination and celebration of creativity - not just the latter. Did we expect too much? Certainly, the Pop Song Panel was something that could have been done better...

DBY: Rodaidh from The xx, Jammer, Mumdance and Sampha on a platform, a sequencer projected on a screen behind them, a crowd full of people eagerly waiting to be sourced for an interactive song-writing session. The first guy sourced demanded a bar-by-bar recreation of the Seinfeld intro, so did the next, and the next. It went on for about an hour, Eddy Moretti was just sitting there sweating. Basically the only thing decided by the crowd was the BPM, and Jammer's line about "I'm here to beat you up, not beat you down" was thankfully revised. As an experiment in interactive songwriting it was fail, as a chance to witness a collaborative pop recording on the fly it was fine...

JL: As a description of why a lot of people attended, “There's too much alcohol in my system” (the chorus to the collaborative song) fitted pretty well. It was a good party, yes, and most attendees seemed to get what this was – a piss up with some pretty innovative exhibitors. You did wonder how many "creatives" were there, versus hipsters. For Cassette Playa's sake we won't go into the debacle that was her Augmented Reality Presentation? (It just didn't really work).

DBY: Now please publicly admit that I rodgered you solid at the 8bit video game mayhem.

JL: You totally didn't. Certainly not at 'The Thrill of Combat' anyway. I'll give you 'Jetpack Basketball'. There were several 8 bit “art games” by Mark Essen. They were very good, and an ideal demonstration of what The Creators Project did best, and should have had more of – people working at the forefront of technology and art, doing “new” things, new synthesises of form.

DBY: I really ruined James Lawrenson in all forms of 8bit gaming, it was about 50 nil. Of course being indie gaming there were no scores, so this is forever between him and his conscience.

JL: No worries on my conscience. Yours should be worried about your prodigious ability to lie... Do not besmirch by 8bit gaming talent, or you shall be smited at an arcade of your choosing.

DBY: I agree the event didn't really do what it said on the tin, it was mostly established artists on big corporate projects. More people like Mira Calix with her brilliant Mysecretheart project would have been a boon. Good to see the new Spike Jonze short, which you all can see here for free.

JL: 'I'm Here' is a great short, but again, it's paid for by the corporate shilling (Absolut, this time). That led to it feeling a bit empty at heart - company branded, marshalled, no creative chaos. The queues for the free bar and the Twitter feed told you all you needed to know. People were here for a party, not a discussion of creativity in the modern age. Given that this is the first year, maybe they'll develop the interaction as they go on. From a music perspective at least, if you came here looking for innovative creators, you found Mark Ronson (although perhaps reconstituting old songs is just that in these post post-modern times), Tinchy Stryder and Kele. From an art side, there were some truly brilliant things to be seen / experienced, and that is a credit to The Creators Project. Maybe it said all it needed to say, by allowing the attendees to draw their own conclusions on modern creativity? Maybe we missed the point? Did we miss the point?

DBY: Besides the elite raving, there was no point to miss. Jaron Lanier the philosopher who invented VR, has this idea he calls digital Maoism. He sees digital production of arts basically entailing free labour, because writers and musicians all the way up can't make a living off it. They have to return to "real jobs", as creativity becomes something not worth paying for. The money for creators increasingly only exists in the centre. A few of those hipster tweens frantically tweeting to Mark Ronson will make it. The Creators Project shows us what happens when you do, and sweeps the rest of the world under the digital carpet.