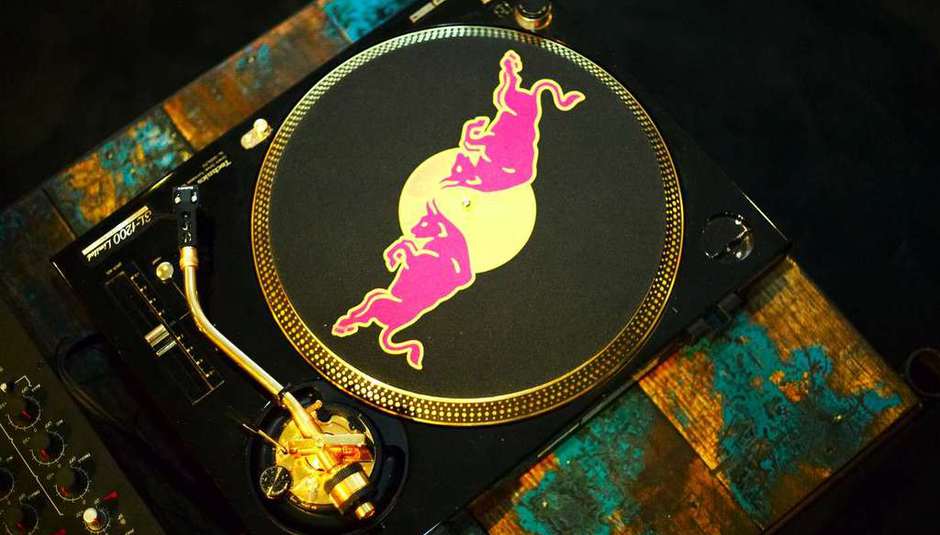 Anyone with a passing knowledge of the Red Bull company could be forgiven for thinking that their raison d’être is, firstly, to sell caffeinated soft drinks and, secondly, to sell more caffeinated soft drinks. Apparently this is not the case. The Red Bull company exists to rock out, party hard and give up-and-coming young musicians wings. At least that’s the impression their press release gave me. I had come to a nondescript building near London Bridge to find out what sort of musicians would sign up to be part of a rock brand.

I found myself stood in the lobby of the Red Bull Music Academy. Each year the Academy hand-picks sixty young musicians from all over the world to come together and make music, and it can count the likes of Mr Hudson, GoldieLocks and Flying Lotus among its alumni. A different city plays host each time, and the last three have been held in Melbourne, Toronto and Barcelona respectively. This year, it came to London.

It came, specifically, to a spacious building on Tooley Street. Bought to house Red Bull’s new London HQ, it was first transformed into a musical playground that looked like it had been designed by Nathan Barley. There were brightly coloured sculptures that resembled those toy car rides you see outside arcades. There were Macs sat in the cafe loaded with GarageBand. There was a piano with all the wires pulled out into bushy eyebrows. It looked as if someone was trying to show the guts being ripped out of music, but it seemed rude to mention this to the pleasant PR guy showing me round.

As he talked, I became increasingly embarrassed of my own cynicism. Reading Naomi Klein’s ‘No Logo’ had taught me all about ‘cool hunting’, corporations piggy-backing on the talent and creativity of young artists to boost their own sales, and it seemed pretty obvious that that was what was going on here. But as he showed me the recording studio fitted out with one of Rammstein’s old mixing desks, the basement rehearsal space and the storeroom filled with every kind of instrument or music-creating gadget you could dream of, along with plenty of private rooms in which to experiment, I began to see why competition was so fierce to get a place here. The glaring omission from it all was the Red Bull logo. There were plenty of cans about, but elsewhere the branding was always subtle and understated and the PR guy was at pains to point out that the Academy’s participants were given access to the facilities with no strings attached. They weren’t asked to hand over rights to their music or to make it a certain way. They weren’t even actually required to make any music at all. If this is selling out, it can never have tasted so good.

I wanted to find out how the artists felt about the promised land they’d found themselves in so I left the PR guy and found a 20-year-old Mexican girl going by the name of Teri Gender-Bender. Teri is the singer and songwriter in a band called Le Butcherettes and is the most energetic human being I have ever met. She carries herself like a natural rock star and instantly begins telling me self-mythologising tales of onstage excess. Meeting her, I’m even more baffled about the fact that, in her words, “music, and Red Bull, have brought us together.” She does have an off-brand confession: “I haven’t had one Red Bull. I don’t drink caffeine.”

I ask her how she feels about the Academy, and she says:

“It’s amazing. There’s a lot of investment in computers and stuff. It’s like a taste of heaven.” At the same time, she’s aware that she finds herself in an odd situation: a self-described punk-rocker being supported by a soft-drink company: “It’s ironic, in a way, because the history of punk rock is rebelling against the White Man’s industry, the White Man’s market. But the White Man’s market is also helping music. It’s crazy.”

She says she doesn’t think about how she’s going to make a living out of music in the age of Free, so I ask her how she’d feel about writing a song for Red Bull.

“I don’t know if it’s ‘selling out’. If you’re going to sell your soul to rock’n’roll, at least try to take advantage of it. I know it sounds weird. People try to make us feel bad for doing something that has to do with big stuff like Coca-Cola or Red Bull, but if Red Bull asked me to do a song for them I would do it because they’re doing this for me. Maybe I wouldn’t do it for anyone else. I’d just have to feel comfortable with it. I don’t drink caffeine, but I like what they stand for, which is why I would do it. If it’s selling out then cool. At least I’m going to get bread, get fed and I’m going to give milk to my children. Everything’s a business nowadays”

Jorge Read agrees. He’s a DJ from the Dominican Republic who calls the Academy “a dream come true.” He tells me:

Unsurprisingly he’s all for Red Bull supporting struggling artists who’d never otherwise have access to this calibre of studio equipment. He’s not going to look a gift horse in the mouth, and reminds me of the lack of corporate branding going on. “You can go through the building and you don’t see one Red Bull sign. Everyone walks by and is like ‘What is this place?’”

As well as the access to equipment and all-expenses-paid lifestyle, one of the attractions of the Academy is the private lecture series they run, featuring established musicians and industry figures. I sit in on a talk by Pedro Winter, the guy behind Ed Banger records. Among the anecdotes about hanging out with Daft Punk, he has some sage advice for his rapt audience. He tells them about his move into producing merchandise with Cool Cats and says “finding money with brands is the new game today.” He asks them rhetorically how they could ever turn down Nike: “They are monsters, but sometimes it is good to play with monsters. Nowadays brands understand it is not about putting a logo on your flyer. It is about being part of something.” He tells them simply: “Take life with a smile and sell out. Mainstream and underground is over. You are all mainstream now.”

So there you go. There’s no shame in corporate arts patronage. It’ll surely be soon forgotten anyway. No-one remembers the patrons of Shakespeare or Da Vinci, but they both took money from the wealthy to fund their work. Samuel Johnson once described a patron as “one who looks with unconcern on a man struggling for life in the water, and, when he has reached ground, encumbers him with help”, but that’s not a charge you can level at this Academy. It’s surely better for music that Red Bull plough their money into unknown creatives rather than slapping their logo onto an established band’s mega tour.

The question, then, is what Red Bull are getting out of this? I find the PR guy again and ask him straight: what’s the catch? He concedes that the company is not running the Academy out of altruism. For Red Bull it’s about a notion of authentic involvement, or as he puts it, the brand having to “earn its place on the scene”. They think the way to do that is by stepping in where record companies are failing. “Record companies don’t nurture anyone anymore,” he says, “Brands can play a part in music.”

The Red Bull Music Academy is testament to that, yet despite their enthusiasm it still leaves me feeling somehow sorry for the talented kids making righteous noise in the next room. They’ve been dumped into a brave new world that the most experienced heads in the business are struggling to make work. All they want to do is make a living making music but they’ve been raised on dreams of rock stars they can no longer possibly emulate. The rules of the game have changed and you can’t blame them and other struggling artists for feeling like there’s nothing left for them to do but grit their teeth and take the corporate bull by the horns.