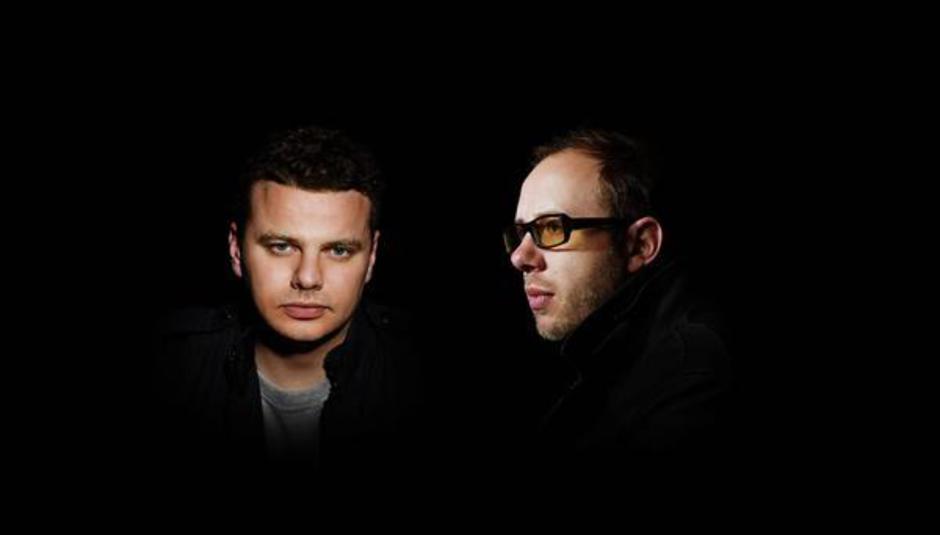 The Chemical Brothers make a triumphant return after an 18 month hiatus, rocking the rafters at Camden’s Roundhouse…

The high regard in which Tom Rowlands and Ed Simons of The Chemical Brothers are held is unsurprising considering the longevity with which they have managed to maintain their production line of hits. Their last album, We Are The Night, produced one of 2007’s finest club tracks in ‘Saturate’, and lead them on a worldwide tour which climaxed at Glastonbury where they went head to head with The Who as Sunday night’s headliners. Having taken an 18 month break, The Chems returned triumphantly to the stage at Camden’s Roundhouse for the first of four consecutive gigs at the venue.

The new album Further, due for release on 14th June, is touted as seeing The Chemical Brothers ditching the more popular sound featuring guest vocals which served them so well on We Are The Night, and instead focusing on more stripped down and “underground” club music. To peruse their back-catalogue is to witness an act that has constantly evolved over the course of the 15 or so years that they have been around. They have displayed a remarkable ability to keep their finger on the pulse of what’s hot and what’s not, and as such while they have never been famed for their innovation or the production of music that is ground breaking or boundary pushing, they have managed to keep up with contemporary trends, and in many cases out-do the innovators at their own game. From their Big-Beat beginnings, to the Prodigy-inspired acid tinged work that included the likes of ‘Hey Boy, Hey Girl’, to until now their most recent foray into the world of euphoric electro with the aforementioned ‘Saturate’, they have kept up with the times, and more importantly, managed to rise to the top of each field into which they choose to delve. Thus, what they lack in creative spark, they more than make up for in their sheer ability and professionalism. Their move towards producing music that is more club-orientated is one that has been mirrored recently by acts as diverse as Caribou, Booka Shade and Four Tet, and bears witness to their chameleon-like ability to stay in the dance music mainstream.

Entering the Roundhouse, the crowd reflected the appeal that The Chemical Brothers hold, with the age rage spanning from teenagers to 30 and 40 somethings. With the average age leaning quite heavily towards the 30+, the jovial atmosphere of people who had dusted off the old rave-gear for the night leant to the expectation which crackled within the circular venue. Having long since passed the point at which they had to prove themselves, one could get the impression that they could have turned up and whacked on a mixtape and the Roundhouse would still have gone mental. Doting pill-heads, after all, are always an easy crowd.

The first half of their set was taken up by playing what one could assume was the entirety of Further, and confirmed all of the reports about their new direction. The only two tracks to have been released so far, ‘Escape Velocity’ and the euphoric ‘Swoon’ (‘Saturate’ 2010 anyone?), both featured along with new visuals that played across the ridiculously large screens that enveloped the stage and which were reminiscent of a psychedelic iTunes advert cum Bond intro scene. The effort put into their live performances is only matched by the likes of Daft Punk, and yet again they proved that they are the masters of what they do, the visuals and lighting reaching levels that Deadmau5 could only dream of. The new tracks do what they say on the tin and mark this summer as one in which The Chemical Brothers will conquer all again. ‘Swoon’ in particular will no doubt join the likes of Booka Shade’s ‘Regenerate’ as the 5 a.m. dancefloor killers of the coming months.

Further ended and was followed by what seemed to be an eternity of low buzzing, a distorted intermission if you will before they delved into their back-catalogue to finish off the night. As much as their new work had been appreciated, it was this moment that the large majority of the crowd had been waiting for, and so when the beginnings of ‘Hey Boy, Hey Girl’ echoed out across the sweaty crowd, the place literally erupted. Glaring omissions from the remainder of the set included the likes of ‘Galvanise’, ‘Do It Again’ and ‘Midnight Madness’ and suggested that track-choice was made with the new sound of Further very much in mind, with a selection of the more club-orientated tracks from their previous releases. Disappointingly some of the mixes and visuals seemed to be identical to those that featured on their last set of live shows, giving the impression that they had just put their 2007 tape in and leant back to watch the mayhem. So once again ‘Saturate’ mixes directly into ‘Believe’, precisely as before with the same exploding paint-ball visuals. It’s just one example which left a stale, if not sour taste in the mouth. Despite the lack of effort to try and mix it up, the effect was much the same as it was three years ago and once again established that no matter what you think of their music, they are without a doubt one of the most entertaining, fun and crowd pleasing acts out there. Their live shows are unrivalled, and on this, the first night of 4 sold out nights, they once again showed why they are masters of everything they do. Superstar DJ’s? You bet.