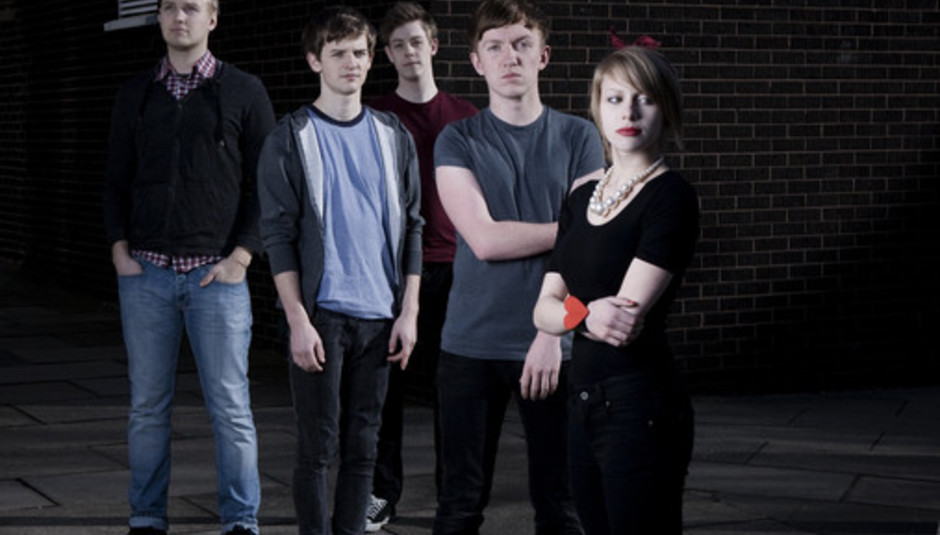 Rolo Tomassi are a multi-faceted band. If it’s not the kick ass riffs that grab you then there are wistful, dream like synth interludes and lead singer Eva Spence’s vocals which switch between demonic and angelic with ease.

Having released their first album Hysterics in 2008, Rolo Tomassi caught our eye last year when it was announced that their second album, Cosmology, would be produced by Diplo, a man best known for ’pon de floor bangers' with MIA and Major Lazer. DiS met up with synth player and song writer James Spence to discuss breaking out of the expectations of hardcore music and living/ recording in Los Angeles and studying the Universe.

DiS: What did you learn from making your first album? And how did that inform the making of Cosmology?

On the first album we were actually learning how to just write an album because prior to that all we’d done was make EPs and singles. I might not know exactly how to write an album now but having made the first one and having the opportunity to write a second one we can see the shortcomings of what we did in the past. It’s acted as a real leaning curve and helped us make a better second album, which we all think is something we have done.

Was Cosmology an easier album to make than Hysterics?

It was a bit of both really. It was certainly a challenge in the sense that you have your whole life to write your first album and then three months to write the second. Having such less time to write has made our new songs much more structured and I think that’s a really good thing. Having a deadline was great because if we can drag things out and mess around with songs we definitely will do that so knowing that we had to get things ready helped us focus. It definitely shows, the music sounds like the result of a defined period of song writing rather than a sporadic and drawn out process.

You got to record the album in Los Angeles. How did you find living and working there?

We lived there for three weeks in a one-bedroom apartment that was owned by the guy who ran the studio where we were recording so we didn’t really do anything other than sleep there. Recording there was fantastic though because prior to that we’d only ever recorded in Leeds or Barnsley in Yorkshire so it’s quite a different world to live in. It was an incredible experience and I’m so grateful that we got to go there. It was so relaxing and easy, probably the best recording experience I’ve ever had. Just the fact it was sunny every day put everyone in a good mood for a start.

Diplo produced Cosmology. Do you think peoples expectations of Rolo Tomassi will change now you’ve worked with him considering his previous work?

I think a lot of people were surprised when they first heard the news that we were working together and expecting us to come back with some sort of dub/ hardcore crossover album and have completely changed direction completely. That’s really not the case at all. We’d totally written the album before we even met Diplo to start recording. We had a clear idea of how we wanted it to sound, he was just there to facilitate that. It still sounds exactly like a Rolo Tomassi album, it’s just a better recording than anything we’ve ever done before and that’s what we wanted from working with him.

How did your relationship with him come about?

We saw that he’d mentioned us in an interview and we got in touch as asked if he’d like to remix a Rolo Tomassi song. He said no, but that he’d love to produce our next album. We hadn’t written the album at that point but he said that he had a three week period free in October and that if we wanted to work with him then he was really keen to do something together. We immediately started writing to get ready for that three weeks in October because we didn’t want to turn down the opportunity to work with someone who was passionate about our band and who had basically approached us about working together.

What was the main thing that he brought to the album?

I’d say it was help with the vocals. He has worked with so many amazing vocalists so he was able to give us some really great tips on how to make things sound right and bring certain parts out of Eva (Spence, lead singer)’s vocals.

Do you think fans of acts like M.I.A and Major Lazer will check you guys out now you’ve worked with him?

Your fans will know that as people, Rolo Tomassi have really good and broad taste in music so it would be nice if that love of all styles was reciprocated.

Yeah, obviously we all love so many different types of stuff that the chance to work with someone outside of the hardcore realm was a great opportunity for us.

What kind of stuff were you listening to around the writing and recording of Cosmology?

Myself and our guitarist Joe were listening to a lot of Meshuggah and the new Mew record. I think a lot of the keyboard sounds on the new album are influenced by the fact I was listening to M83 too. I’m sure there are others but they’re the ones that stand out as having some effect in the way we were writing and thinking about music. Just listening to albums by those bands and thinking “This is amazing.” You can definitely hear the influence of Mew on the final track on the album.

What is the significance of calling the album Cosmology?

I was on the internet one night, on Facebook and a couple of my friends were talking about an University module called cosmology. I’d never heard of the word before so I looked it up and it just made my brain and imagination totally explode. In terms of imagery it fitted with exactly what we were doing and even before I knew the meaning of it I knew that I wanted to call a song or an album that name. Obviously with cosmology being the study of the universe it’s quite a broad term but it includes the role of the individual and the lyrics I was writing included a lot of self examination and finding my role in the world. Also, I really like the whole idea of the Universe and space goes well with the music we make and the bands I love. Prog-rock and space are always linked and I thought it would be fun to almost throw a clichéd title in there.

Finally. Are you excited to play these new songs live and were they written with playing live in mind?

Absolutely. We basically wrote it in-between playing festivals so we would come back from seeing bands absolutely kill it in front of big crowds and just be inspired by that. The first album was quite technical so we wanted to keep a degree of that but also make really fun songs too. I can’t wait to play these songs live from the club shows up to any big stages we might get to play. The songs are so good and they’re going to sound even better played live.

Rolo Tomassi release Cosmology through Hassle on May 24.