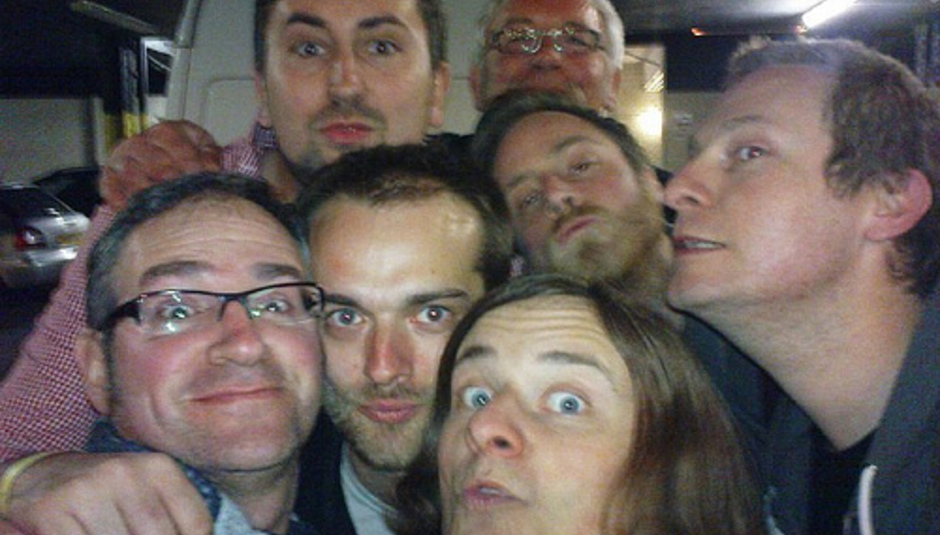 Ace historical themed post-rockers iLiKETRAiNS have recently been gallivanting around Europe with Editors. The Leeds four-piece were so excited about this little adventure they asked us if they could put together a tour diary for DiS with pictures and stuff (Part 1 of which is here). Now, having just returned from their jaunt, here is Part 2 once again courtesy of main singer/songwriter David Martin...

DAY 9
Fully refreshed after a day off, we make our leisurely way to Luxembourg. After a couple of difficult shows I’m keen to get back on it. Firstly, however, we get down to the serious business… table tennis. The venue in Luxembourg is a purpose built rock and roll complex. We’re playing a thousand capacity venue in the complex and the table tennis table is set up in the middle of a 6000 capacity arena next door. It is the closest I have yet come to competing in the Olympics. I narrowly lose another couple of games to Russell from Editors. He always seems to be able to up his game when he needs to. I’m beginning to worry that I will never beat him for two reasons. Firstly he is possibly slightly better than I am, and secondly I don’t have the right footwear for the job. Tom Editors partner and son come out to Luxembourg to join the tour for a couple of dates. It turns out his son is pretty keen on trains too, and has a great time running around at sound check, playing harmonica through the PA and beeping the horn on the tour bus. I really enjoy the show and the audience is really responsive. Last time we played in Luxembourg it was to about 15 people, but now I have renewed faith and am looking forward to returning. I celebrate a good show with one too many gin and tonics and decide to get the low down from one of the bus drivers on what all the buttons in his cab do. There are lots, and I don’t remember what they are all for. DAY 10
Tourcoing is a small town on the French Belgian border. It is the smallest venue on the tour and we feel at home in its surroundings. The show goes well. We play our traditional 10 minute set closer Spencer Perceval for the first and only time on this tour. It feels good. The Airship boys discover that the bar is serving a really strong Belgian white beer. Another day off tomorrow and another messy night ensues. Top marks to Airship for leaving all their merch at the venue, and to Simon for being an extremely happy drunk. Rock n roll. DAY 11
The sun is shining and we find ourselves a campsite near to the town of Ypres in Belgium. It is a beautiful part of the world with a dark and sobering recent history. We have a very quiet day with a few beers in the sun, a little ramble and we cook tacos for dinner. DAY 12
We only found out that we were playing the Paris show in Tourcoing. We were under the impression that this would also be a day off for us. Paris is difficult to drive through at the best of times, but the thought of navigating it in a motorhome with a trailer is pretty daunting. We leave ourselves plenty of time. The journey is totally worth it and we’re all really excited to be playing at the Olympia Theatre. It is a venue steeped in music history, a favourite of Edith Piaf and Jacques Brel and the venue for a famous Jeff Buckley live album. I do wonder what Edith Piaf made of the ant situation in the dressing rooms. They are pretty rampant. For technical reasons we only have a 20 minute glory set and when we come off stage and it all feels like a dream. Editors bring the house down tonight. The crowd is fantastic. After the show we find out that it is Tom’s birthday and we celebrate with champagne and cake. If we had known I would have happily led the theatre in a rousing rendition of happy birthday, and we could have a found a suitably inappropriate present from a motorway service station. I suspect this is why we weren’t informed! Chatting with Chris Editors and Marcus Airship I manage to recruit them both to my fledgling curling team. I’m keen to win an Olympic medal and feel that my best chance is probably in curling. We all agree that the musicians turned Olympic medal winners press angle would benefit all bands concerned. DAY 13
Antwerp is the big one. Ian is back in the fold and we’re back to full strength for our biggest rock show yet. Somehow I’m not at all nervous as we step in front of 7000 people. It feels great. We have always had good shows in Belgium and this is no exception. We come off stage buzzing. My one regret is that I didn’t attempt to start a Mexican wave, but that probably isn’t in keeping with our onstage demeanour. Still it would have been fun. Editors have pyrotechnics and confetti cannons for this show so we make a point of watching from the side of the stage as close to the action as possible. Mmmmm Fire. Backstage after the show Ian meets one of his childhood heroes, Tom Barman of dEUS. He tries his best not to come across as a weird fan boy. Ian seems pleased. Our last day on the Editors tour takes us to Amsterdam. The venue is only slightly smaller than the previous night, situated next door to the Ajax stadium. As the doors have been opening early on the last few shows we haven’t had any time to play table tennis. Russell is undefeated champion. I am crushed! The show is good, and we meet some familiar faces. Whilst I’m looking forward to getting home to my girlfriend and cats we have had a great time on tour and we’re sad to say our goodbyes. It is Ed Editors stag do in Amsterdam but we have a show in the north of Yorkshire to get to. As Editors, Airship and crew prepare for a messy night on the town we bid farewell and load our sorry selves onto the motorhome for a mammoth overnight drive. DAY 15
Tan Hill is the highest pub in England and home of British Sea Power’s Sing Ye From the Hillsides festival. Its capacity is about 200 and is a far cry from the arenas we have left behind. The journey from Amsterdam to North Yorkshire is horrific. I haven’t developed the important rock and roll skill of sleeping in transit and manage about 15 minutes of sleep on the ferry during the 15 hour non stop journey. It is one of those drives that you find yourselves doing from time to time as a rock band and you vow never to do again. We are happy and delirious when we finally arrive and are greeted by friendly faces, real ale and an open fire. The weather is a real shock to the system. In Paris a few days earlier it was nearing 30 degree and at Tan Hill it is actually trying to snow! The show is a lot of fun and we go down really well. We politely refuse the offer of an encore as we are dead on our feet! Another couple of pints of real ale and most of us hit the hay. Simon and Trev (our soundman) stay the course and somehow manage to watch Metronomy who take to the stage at 4am. Tan Hill is a fine way to end a couple of weeks on the road. Massive thanks to Editors, crew and fans and the Airship boys and also to British Sea Power and fans. The tour was a success in our eyes. We have broken somewhere near even, made it back in one piece, with a story to tell and have hopefully picked up a few new fans along the way. Cheers, iLiKETRAiNS...