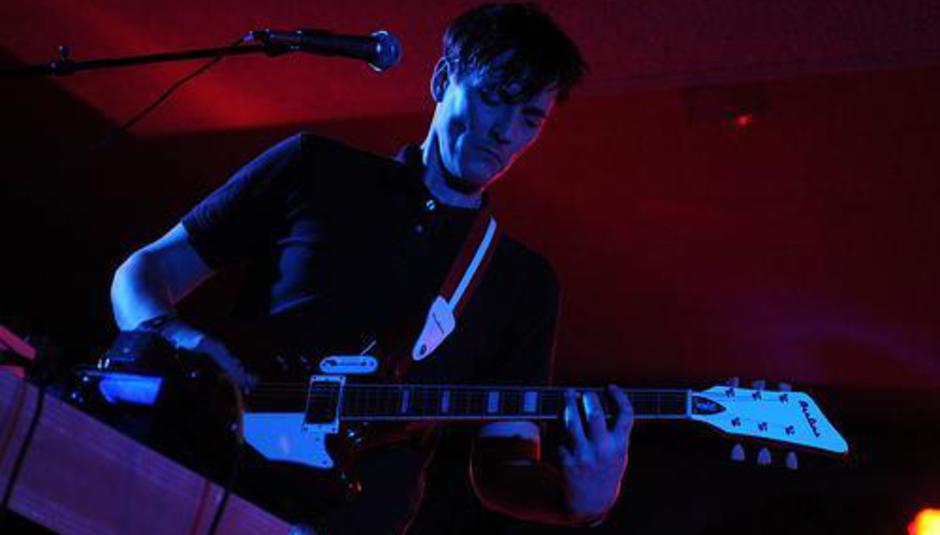 "Driving in the rush hour..." sang Jane Wiedlin, once upon a time, "...ooh you send me" as though it was meant to be the most enjoyable life experience imaginable. Well, she may have spent her teenage years sidling up to Belinda Carlisle and co. as one of The Go-Gos but sadly her sentimental analogy about that time of day most sane people would rather avoid is wrong, wrong, WRONG. See, thanks to the rush hour...and we're talking one that starts in Nottingham city centre and ends up somewhere around Junction 24 of the M25 three or so hours later causes DiS to miss Voice Of The Seven Thunders, intuitively billed as tonight's secret "special guests", something that didn't go amiss on a certain New York outfit's fan message boards.

Nevertheless, while the Luminaire's "sold out" signs found themselves employed to full effect this evening, the glum frowns at the back of the room on one or two younger faces suggests their MGMT fixation wasn't satisfied in the slightest. From a personal point of view, reports that Voice Of The Seven Thunders played "the show of their life" from several more reliable sources makes us want to slit our wrists (and the British Transport Minister's throat) in despair too.

Fortunately, the delicate folky psychedelia of Hush Arbors provides more than a tranquil interlude before tonight's main course. Playing as a four-piece this evening, their refined-cum-ethereal stylings are a blissful respite, drawing in influences as disparate as traditional country ('Coming Home'), breathless melancholy ('Lisbon') and widescreen symphonies ('Devil Made You High', 'Follow Closely'), their set seems more accomplished, and less frenetic than the last time DiS set eyes on them at last year's ATP vs The Fans event in Minehead. With most of tonight's set taken from 2009's Yankee Reality long player, their polished performance is an altogether resolute experience that more than makes up for missing the opening act, whether they be billed, rumoured or otherwise.

Not that those MGMT rumours subside. With Spectrum frontman Sonic Boom having produced their sophomore album, not to mention a headline show of their own in the capital city tomorrow evening, the pap-snappers are out in full force waiting for the moment that never arrives. And with Boom flanked this evening by Super Furry Animals bassist Guto Pryce alongside regular mainstays guitarist Jason Holt and percussionist Roger Brogan, why should anyone really care if messrs VanWyngarden and Goldwasser join their entourage or not, particularly when the band sound as brutal and dynamic as this.

With only last year's 'War Sucks' providing a recent addition to what is essentially a retrospective setlist, one would have half expected Spectrum to go through the motions. That it isn't the case is testimony to Sonic Boom's diligent insistence to continue pushing things forward in any way possible. Spacemen 3's back catalogue is touched upon slightly courtesy of 'Revolution' and a closing, ethereal wig out 'Suicide', both staples of 1989's Playing With Fire and 'Set Me Free' from its successor, Recurring. It's the oblique reading of Mudhoney's 'When Tomorrow Hits' and experimental drone take on Can's 'Yoo Doo Right' that set Spectrum apart from all the pretenders who've trodden in their leader's discerning footsteps. Both offer little resemblance to the originals, Boom preferring instead to re-articulate both compositions, and to a lesser extent the soft tones of Suicide's 'Che' too, in his own distinctive style.

By the end, talk is of whether or not Sonic Boom will make another Spectrum record rather than concentrate on production duties elsewhere, as for an hour or so tonight, Rugby's most eccentric maverick borders on genius, and with such incisive homegrown talents as this becoming rarer by the day, it would surely be a travesty were his considerable wares never to grace the front sleeve of one of his own long players.