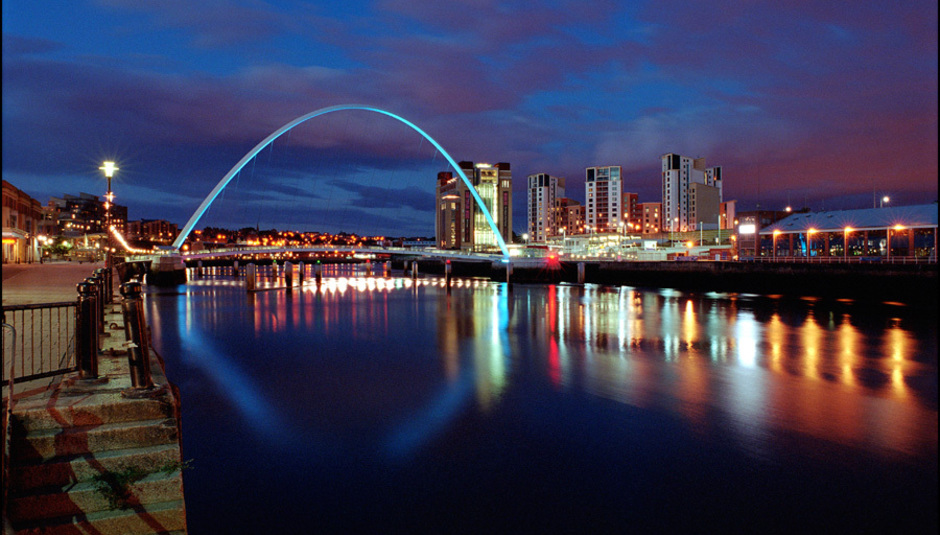 Our first local scene report, gig guide and DiScover mixtape of bands to check out from our DiSser in Newcastle...

Newcastle's not just black and white, okay? From the outside looking in there's long been a habit to stereotype our 'Geordie Nation' as a bunch of shaven-headed, brown ale-swilling Neanderthals who enjoy nothing more than a pint, a punch-up and a Greggs cheese pasty down the Bigg Market on a Saturday night. Really, nothing could be further from the truth. We may have lost out on European Capital of Culture to Liverpool, but the sting of second place has given birth to an artistic revolution up here. Spearheaded by Maximo Park (who shunned the bright lights of London in favour of staying put in their adopted home town), Newcastle's music scene is the healthiest it's been in years. With local outfits Detroit Social Club and Little Comets recently inking lucrative major label deals, there's a palpable sense of being at the genesis of the region's most intense period of musical creativity since the Eric Burdon-led blues boom of the sixties.

Open since 2002, The Cluny in Ouseburn is the only pub on Tyneside to make the top 100 list of the World's Best Bars. It also boasts a 300-capacity live room that has played host to the aforementioned Maximo Park, Arctic Monkeys, Seasick Steve and (unbelievably) Beyonce's little sis Solange Knowles (among countless others). Firmly established as one of the UK's premier small venues, it recently raised nearly four thousand pounds for the Haiti Earthquake Appeal with a series of gigs culminating in a triumphant nearly-hometown performance from the mighty Field Music. And it does a pretty tasty burger, too.

From its humble origins across the city's venues, Newcastle’s Evolution Weekender has enjoyed a Darwin-esque transformation into the UK’s only fully-fledged city centre music festival. This year’s recently announced line-up sees headliners Paulo Nutini, Fake Blood, Enter Shikari and Delphic plus North East favourites The Futureheads, Field Music and Frankie & The Heartstrings taking over the banks of the Tyne for two full days of riotous rock ‘n’ roll at the end of May. The festival is preceded by unsigned showcase Evolution Emerging in which more than 200 local bands have applied for the chance to play at a massive multi-venue event taking place across the city’s Ouseburn district. Last year saw the likes of Night Of Sevens, Manila Chapter and Brilliant Mind emerge from the pack as three of the region’s brightest new hopes. Expect to find some real gems among this year’s 30-odd performers.

Singer-songwriter Beth Jeans Houghton is barely out of her teens but is already the darling of the UK broadsheets. Delivering wonderfully unhinged anti-folk with a surrealist edge, Newcastle native Houghton has a talent for self-mythologising (her website bio claims she was born in Transylvania to a pack of albino wolves who raised her on a diet of chewing tobacco and stuffed clams) but don't don't let that put you off. This year's debut album is sure to be a classic.

Unleashing their self-styled "retro-big beat-gospel-influenced-junkie folk," Tyneside-based indie-rockers Detroit Social Club have a firm grasp of pop's outsider history. Signed to Fiction Records the band fuse the burnt-out blues of Exile On Main Street-era Rolling Stones with the MDMA-fuelled indie-dance of late eighties Manchester. The first single from their forthcoming Jim Abbiss-produced debut landed on March 1. Expect to hear their full-length in the coming months.

In a few short months, Newcastle-based guitar-pop outfit Little Comets have gone from guerilla gigging on Metros to getting played on daytime Radio One. Having signed with celebrated major label Columbia, the four-piece are busy putting the finishing touches to a debut LP that already looks set to fire them straight into the Britrock mainstream when it lands later this year.

Tyneside is awash with great gigs and great venues at the moment. So much so that a full rundown of must-see events would be pretty pointless. Nevertheless, here's my pick of gigs that really ought to get you out the house in the coming weeks...

Indie-disco mavericks New Young Pony Club showcase tracks from their well-received sophomore album The Optimist at the O2 Academy on Westgate Road on March 25th; local electro-poppers Air To Achilles continue their run of gigs with a set at the Dog & Parrot on the 26th; Newcastle-based promoters Blank Promotions celebrate their 1st birthday at The Cluny on March 26th with a stellar line-up of up-and-coming Tyneside talent including Her Name Is Calla, Laterns On The Lake, I Concur, Sonar Di and Nathalie Stern; at the forefront of North East music for four years, Tyneside-based indie mag Narc marks its anniversary with a huge gig at The Cluny on April 1st that features performances from rising stars Night Of Sevens, Ryoga, Wolves At The Door, Baskin's Wish and Let's Buy Happiness; two of the region's finest indie outfits, Grandfather Birds and Illustrators, join forces for what promises to be a stunning double header at The Head Of Steam on April 5.

Finally, for your listening pleasure, five Newcastle-based bands that look set to make some sizeable waves outside the region in the coming months...

You'll either love 'em or hate 'em but there's no denying that Polarsets have talent. Don't know what to make of their self-styled 'deep disco' label? Really, it's just quirky indie-pop at its finest.

Remember New Vinyls, the NME-approved twee-poppers that looked destined for greatness a couple of year's ago? Well, they've ditched the multi-instrumentalism and re-emerged as the leaner, tighter Smiths-inspired Brilliant Mind.

Want to know what else is going on up here? Point your browser at my blog and I'll keep you bang up-to-date with the very best new music, gigs and events on Tyneside. http://toonwaves.co.uk