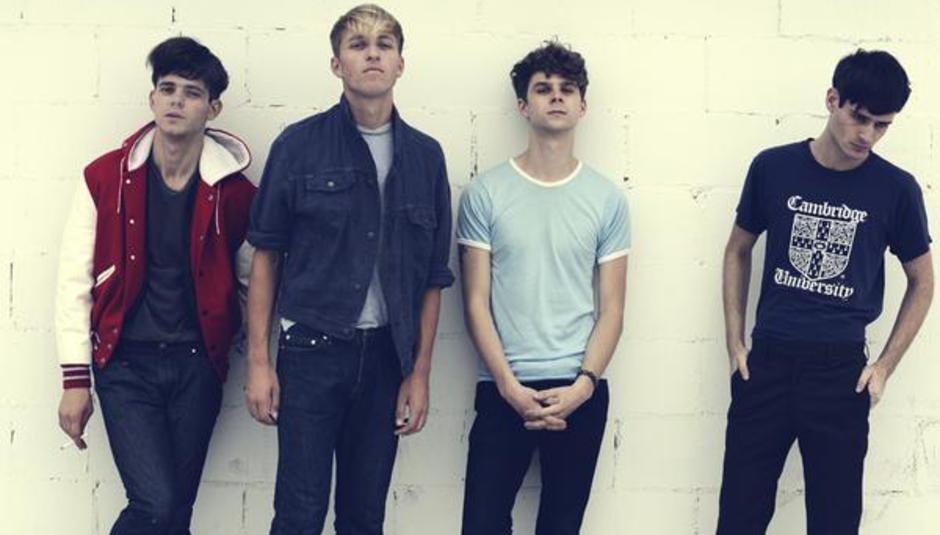 Brooklyn based four-piece The Drums currently find themselves riding merrily along the crest of a hype-assisted wave. Perhaps unfairly seen as the new decade's answer to The Strokes, their first UK release, the excellent Summertime EP culled together seven songs that borrowed from a host of influences both past and present, and while it would be churlish to herald them as the finished article just yet, their potential is frightening.

Currently on their biggest UK jaunt to date alongside tour buddies The Maccabees, Bombay Bicycle Club and The Big Pink, DiS caught up with them on their spacious tour bus after a resoundingly energetic performance at Nottingham's Rock City...

DiS: Do you think UK audiences have been quite receptive to your band because they can hear certain familiar influences in your music?
JP: Yeah, I think so. It's definitely been much bigger here over a shorter space of time, and they're certainly a lot more enthusiastic for live music than some of the places we've played back home.
Jacob Graham: I think there is an element of the UK's music scene, certainly with regards to members of the press, that have warmed to us because we remind them of some of their favourite bands, whether by accident or otherwise.
JP: I think that's true to an extent. There's still parts of America that find it difficult to embrace anything other than hard rock for example, whereas here the general perception we're getting is that audiences tend to be much more open minded. I think you'll find more and more bands forming in America that will look to get over to the UK at the earliest possible opportunity in the future because of this.
JG: The press here do seem more willing to take a chance on a new band, whereas back home it's very black and white, in that you either fall into the "surefire hit" bracket or obscurity.
JP: I think that can be the same everywhere though, even here. There's quite a few of my favourite bands from this country that never got the recognition they deserved.
JG: Yeah but in the States everything is very radio orientated, almost to the point whereby if you don't get playlisted on certain stations or shows no one may ever get to hear of you or your music.

DiS: So what's the difference between radio stations over here and in the States? BBC Radio One for example can be a pretty closed shop as far as independent music is concerned, yet at the same time many bands still achieve moderate degrees of success regardless.
JP: Oh I dunno. I've heard stuff on BBC Radio that would never have got past the cutting room in most major US radio stations. It's really surprising and refreshing to hear shows devoted to new artists here, albeit late at night or whatever.
JG: There's a definite bias to hard rock and hip hop in the States, regardless of whether it's a new or established batch of artists, and I think that's the big difference for me anyway. UK Radio doesn't seem so genre conscious.

DiS: But daytime BBC Radio One is very R&B orientated.
JP: Maybe, but there are stations back home that will only play one type of music or genre. There are stations devoted to country and western, gospel, R&B, hard rock and various other sub genres of each and the worrying aspect is that anything that falls in between those specific cracks gets ignored for that reason only.
JG: What's even more worrying is that the majority of new artists making exciting and genuinely original music tend to cross many genres so won't get the exposure back home they'd receive elsewhere...
JP: ...or at least not until they've experienced a degree of success in Europe or wherever.

DiS: There must be some independent radio shows in the States that give exposure to original artists though, even if these are only available online?
JP: Yeah, there are a few, but they're very few and far between and generally find themselves usurped by the major genre-specific mainstream ones.

DiS: I guess it comes down to a question of why should people care about your band more than any other band?
JP: For us it feels like a form of salvation. I mean, we started this band for ourselves, wrote songs that meant something to us and didn't really expect many other people to get into what we were doing.

DiS: Does it worry you though that the music press have in many ways contributed to the attention you're currently getting, to the point where some people may instantly dismiss you because of such hype?
JP: I guess when you're getting talked about a lot there is always a danger of that happening, but when you just break it down into what it actually means, it's nothing more than people simply talking about liking your songs. I mean, we're striving to write the perfect pop song and while we're not naive enough to think we've achieved anything on that scale just yet, it is nice to get some level of praise for what we have managed to create so far. We haven't really developed a settled structure for how we most enjoy writing just yet but as long as we're happy with the songs we're coming up with we'll continue in the same vein, and if we keep getting praise then that's an added bonus really.

DiS: You relocated from Florida to New York at the outset of forming the band. Was that a conscious decision to thrust the band into the spotlight at an early stage?
JP: I was living in Brooklyn for a few years and then I moved to Florida just before I started the band. The easiest decision would have been to stay there because a lot of our friends and families are based there, but we wanted to get away somewhere afresh and concentrate solely on the band, so Brooklyn seemed the obvious place to go. There were no outside influences involved in making this decision at all. I mean, when we went there we didn't really have any completed songs so the last thing on our minds was getting noticed.
Connor Hanwick: I think the ideas for songs we had were pretty strong at that time though, and there was nothing going on in Florida...
JP:...never is really.

DiS: Why do you think that is?
CH: I dunno, there's just nothing going on, no music scene...
JP: In America there's really nothing going on anywhere apart from New York and LA.
JG: That's what the whole point of moving to New York city was about for me. Getting a batch of songs together and playing as many shows as we possibly could.

DiS: You're signed to Moshi Moshi in the UK. How did that come about and what made you go with them?
JP: They came to us. They contacted us about hearing a demo and wanting to put 'Let's Go Surfing' out as a single and we met them and liked what they had to say so here we are. I think one of the things that really impressed us was that they'd obviously listened intently to our songs and were onto us way before any other label, even in the States, and that level of enthusiasm really sold it to us. I was really taken aback by just how far ahead of the game Stephen (Bass, Moshi Moshi co-owner) really was.

DiS: Do you see yourselves building a long term career out of making music?
JP: You know what, I would love to make a career out of doing something I really enjoy, so yeah. I mean, one thing I don't want is for The Drums to be just another flash in the pan band. At the same time that doesn't mean we're going to adopt some crazy mechanical plan either just to ensure we make the right career moves at the right times.
JG: It's like when I think of my favourite bands, you know people like The Smiths, Orange Juice, New Order, My Bloody Valentine, The Cure...every one of those developed and progressed organically, and I want us to try and move along in the same kind of way.
JP: If it's supposed to happen then it has to happen.

DiS: What are your plans for the rest of 2010?
JP: We're gonna be on the road almost constantly for the forseeable future. We're back in the UK in May with Florence & The Machine which we're really looking forward to, and in between times we've got the next single coming out, 'Best Friend', which is actually the first song we ever wrote together, almost a year ago now. The album should be out later in the year as well, and we're looking at possibly ten brand new songs on that although nothing's definite as yet.

DiS: Obviously the Summertime EP was the big breakthrough record for you. Do you envisage any of those songs being re-released as singles, particularly now that there is some interest from UK radio stations?
JP: I don't know. I mean, we haven't discussed anything as yet but I wouldn't totally rule it out either. I would rather us focus on new songs personally...
JG: To me it would be quite unappealing to just keep falling back on old songs rather than moving forwards. I think too many bands fall into that trap of playing safe and it kind of stifles their growth.
JP: It's all about creating something new, fresh and exciting and there's something quite joyous about that as opposed to merely looking back.

Catch The Drums at the following venues:-

The single 'Best Friend' is out via Moshi Moshi on Monday 29th March.