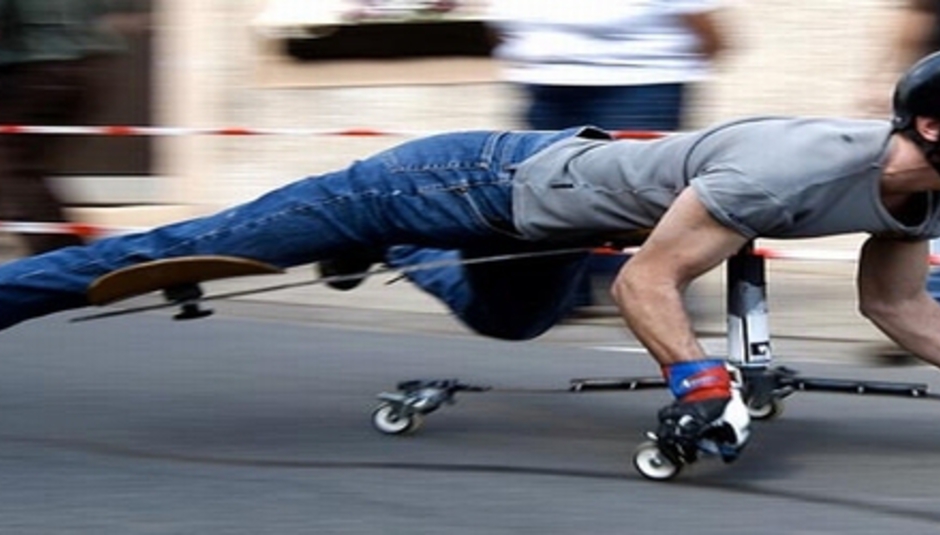 On top of your regular round-up of the electronic releases it's worth directing your purchasing power at, Camden Town's Blue Daisy contributes the next installment in the armchair dancefloor mix series. He produced one of last year's most noteworthy debuts with his Space Ex/The Fall 12 (see ad008), and here he moves between tech house, dubstep, jazz-steeped beats and some extraordinary, exclusive Blue Daisy material. Enjoy it.

Landings is a piece of work that is intimately connected to the landscape. The specific terrain that inspired Richard Skelton, who also records as A Broken Consort, Riftmusic, Clouwbeck, Carousell and Harlassen, is that of the West Pennine Moors, which lie to the east of Skelton's village of Standish, Lancashire. The connection within the music is partly explicit - snatches of birdsong and running water wink out between the jumble of bowed-string instruments and guitar that comprise most of the tracks - but for the most part the extraordinary sense of place is created by the instruments (and the yawning reverb and digital processing applied to them) themselves. In this manner, the energetic bowing central to opener 'Noon Hill Wood' suggests a windblown lattice of branches overhead, while individually plucked strings drip through it like rainwater from leaves.

Most powerfully affecting among a collection of tracks which all leave their mark, the shimmering conertina tones of 'Green Withins Brook', which teeter on the edge of resolution with the same painful exquisiteneness of Brian Eno's 'An Ending (Ascent)', are exceeded only by the engulfing sorrow of 'Undertow', where the keening, feedback-licked strings describe a more intimate variety of the scorched-earth intensity tapped into by Arvo Pärt's 'Cantus in Memory of Benjamin Britten'.

Dusk & Blackdown's superb album Margins Music emerged at the end of the summer of 2008, and commingled grime, dubstep, bhangra and various field recordings - street sounds, a group of inner city sixth formers answering questions about what London means to them - in a powerful attempt to present a portrait of several modern-day London neighbourhoods. Sheffield-based Grievous Angel's album-length re-rub succeeds in matching the anthropological richness of the original work while at the same time streamlining it into a sleeker, more direct transmission. In this way Margins Music: Redux doesn't obviate its source or pale by comparison. Rather it stands as a valuable companion piece.

From the moment the opiate roll of 'Iqbal's Groove (Dub)' throbs into life it's clear you're in practised hands, and for the next hour or so Grievous Angel barely makes a wrong move. Weaving elements taken from the original album into a web of leitmotivs, the original album is ever present, even as the music takes on new forms. Crucially, although quite different in its 'Ogun Mix' form, 'The Bits', featuring the superb, witty lyricism of Trim, remains a highlight.

There is already a tension present when engaging with any new BJ Nilsen recording, so adept is the Swede at confusing the line between what's 'real' and what's synthetic. He might list 'chair dragged across floor', 'wasps run through B&K Type 2 2107' and 'cat climbing up door' in the detailed lists of instrumentation accompanying each track, as well as more conventional entries like 'acoustic guitar' and 'Hammond organ', but after a few hours spent wandering The Invisible City you get the distinct impression that it's the 'various DSP' (digital signal processes) - the one entry that recurs beside every track - that are the most important elements here.

Nilsen is a masterful composer, albeit one who generates knotty, abstruse work that requires time and patience to unlock. Spend time with it, though, and tracks that at first appeared impenetrable or relatively featureless, such as the long drone opener Gravity Station, slowly come to reveal their complex and even enchanting inner workings. No such labour is necessary to reveal the beauty of 'Gradient's slow, majestic ascent and its adjunct 'The Invisible City', however: they lie at the end of this mysterious, challenging journey like glimmering rewards.

Canada might have beaten its bugbear (or, for the Québécois, bête noire) and won their first Olympic gold on home soil by the time you read this, but even if they haven't they can still take pride in the Warp debut of Vancouver's Cameron Reed, aka Babe Rainbow. The 8-bit wobblecore of 'Screwby' and 'Popcommon's uneasy mixture of dystopian clangour with an insidiously catchy melody are smart growers, but it's the EP's latter half that really impresses.

The coordinates of 'Care', which presses a disembodied, queasily modulated vocal between a chill stream of icy electronics and menacing bass groans, point to a spectral land bridge between Shackleton and Burial. 'Tummy Sticks', which more than once threatens to turn into MBV's 'Touched' lightens the mood, crackly Farfisa chords filtering down like sunlight viewed from the ocean floor. The title track, meanwhile, closes this impressive EP with what sounds like the best track Karijn Dreijer Andersson has never sang over.

Comprising two 12s first released in 1999 and 2000, another track from 2001 and some previously unreleased material, Holy Mountain have branched out from their usual psychedelic re-releases to provide this retrospective of Frenchman Fred Bigot's superb series of techno noise experiments. Operating in the astringent pocket beloved of Raster Noton devotees, Bigot's heavy, pulsating constructions - made out of a Roland TR808, a Lexicon JamMan and a couple of filters - are tributes to the power of minimalist composition.

Like echoes of supernovas that can still be picked up using the right equipment, it's possible to detect, in the relentless grind, throb and pound of 'Stereo' and 'Mono', the echoes of Plastikman, Hardfloor and Jeff Mills distilled into their purest, most minimal form. Admittedly, it's a moot point whether the 'right equipment' in this case is in fact a drug damaged brain. After the early extremities, solace of a sort lies at Mono/Stereo's close with the lulling digital chirrup of 'Outside' and 'Symmetriad's low frequency surge.

As well as being awarded the first official release from Night Slugs, the London label run by Bok Bok and L-Vis 1990, [Bruk Magazine] editor Mosca has also got a fine track ('Gold Bricks') on Fabric's bass music primer Elevator Music Vol.1 and a Mary Anne Hobbs mix in the can: not a bad start to 2010, it must be said. 'Square One', the busy offspring of Funky and dubstep, has been floating around for months now but still packs a sparkling punch. It's also backed up here with decent remixes from armchair dancefloor mix alumnus Julio Bashmore, Bok Bok, L-Vis 1990 and Greena.

It's the scruffy epic 'Nike', though, that I suspect is going to still be turned to after 'Square One' has gone the way of most done-to-death club bangers. The number of ideas at play on 'Nike' is impressive: Funky syncopation, Skwee-inflected melody, sudden downshifts into a half-step tempo, the trancelike mantra of the 'for real' vocal hook, and technofied dub echoes that don't sound a world away from those of Basic Channel. Sometimes more really is more.

Skam alumni Posthuman are in gloriously lush retro form on the last in Uncharted Audio's excellent Dubplate Sessions series: 'Europa Sky' is a fine example of music written according to the classic UK techno template. Weaving a UFO-sighting spoken word sample throughout the track - heavily reminiscent of the Rendlesham Forest Incident sample used by Photek on 1995's UFO - 'Europa Sky' zeroes in on that uncanny zone, physically galvanising and soporifically mesmerising all at once, that so many good techno records seem to locate.

Indeed, the pads here are so lulling that it's easy to miss at first how forceful the bass is, a two-note pulse that lends what might otherwise have been a dreamily aimless track some sturdy forward momentum. UK Detroit devotee Cyan341 contributes an excellent remix, carving out a little more space at the track's core and toughening the bassline into a sturdy DJ tool. There's also an Echaskech remix floating around somewhere which, while not included here, is well worth hearing for the way in which it cuts through the original's detailed atmoshperics in favour of a clean, gut-shaking kick and precipitous bass drops. Not clever, but undeniably big. Sometimes I want nothing more than to bathe in some soothing melodic techno: an uncomplicated sort of post-millennial digital Radox (come to think of it, have bath salts and cleansing unguents ever had a more techno name than 'Radox'?) in which to obliterate the cares of the day. On current evidence, Christian Löffler is a good man to turn to at such times. Last summer's Heights EP on Ki managed to be richly, straightforwardly melodic without being cheesy (not nearly as easy as it sounds), and the Raise EP plots the same course.

The EP's title track illustrates of what Löffler does best: the tune is lullaby-simple, the flattened kick unadorned. Yet somehow, what might be dull in less talented hands manages, as with the beatless 'Core', to sound fresh and cumulatively euphoric. 'Glare' and 'Cord' offer similar, albeit more melancholic pleasures. Löffler's project might risk turning into dinner party or, even worse, chillout music, but the skill with which he delivers his creations means that they, for the moment at least, remain more engaging than their surface prettiness might suggest.

'Predator' is the first release on Jamie Anderson's Artform imprint since 2005, so it seems only right that the boss himself should be at the helm of the reboot disc. 'Predator' is a deliciously straighforward techno cut: bleepy, tribal and clinically efficient, it nevertheless develops a character of its own somewhere between the distended hoover stabs, sub-bass growls and synthetic klaxons. On the flip Amsterdam's Jerome leaves the alternating current at the track's heart intact, concentrating on accentuating the elements surrounding it. Sleek and deadly, it's enough to put you in mind of the classic line from the Schwarzenegger movie...or it would be, if I hadn't just tried Googling one up and finding out they were all bollocks.

'But what kind of moraine?' my inner GCSE geography student asks. Rogen? Veiki? How can Ido Govrin be so vague? So casual? Fortunately, matters are in hand: over six tracks, passing through 'Ground', 'Lateral', 'Medial' and 'Recessional' Govrin, co-owner of Israeli label Interval, not only identifies the more common moraine types, but also constructs some remarkable sonic spaces using cello, violin and digital processes, in a similar manner to Aaron Martin & Machinefabriek's 2007 collaboration Cello Recycling/Cello Drowning.

'Ground' is a deceptively beautiful introduction, its rich, nearly baroque timbre and the stately introduction of its successor piece, 'Push', slowly fraying into something more fraught and unstable. 'Lateral' and 'Medial' work at a more subdued but no less unsettling pitch, while the vivid emotional centre of the album comes to be found lying amid the coldy shining lines of the stunning 'Terminal'.