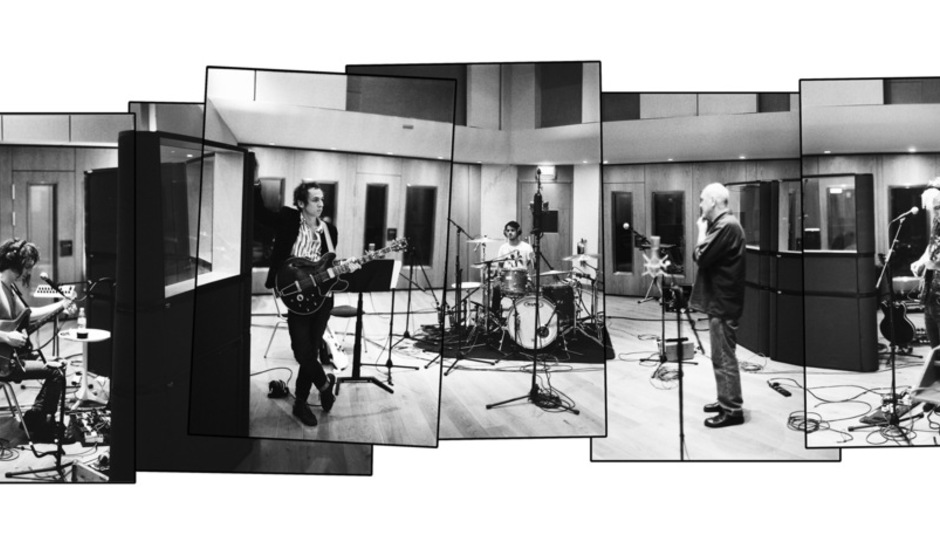 Last week DiS was kindly invited down to the Rough Trade office/bunker to have an exclusive listen to the first five tracks from the third, as-yet-untitled Mystery Jets record. Due in mid-April, the boys (and elderly non touring gent) are still beavering away on the rest of the record in Chiswick, in the British Grove Studios, fact fans and stalkers. Chris Thomas is producing, and he's been involved in some fairly famous records in the past. You know, Dark Side of the Moon, Different Class, Never Mind The Bollocks... That kind of thing. Rumours of the Eel Pie boys 'doing a Gilmour' are unconfirmed at this time. Instead, this is what we reckon. Bear in mind though, this is on first listen, and therefore not to be completely trusted.

'The Girl Is Gone'

The first of the five tracks suggests the record will see a continuance of the Eighties pop sound that saw them win and lose fans alike. Twenty One was probably a bit average in places, in retrospect, but this seems better. It has echoey drums, and the retro keyboards Mystery Jets used to break away from their proggy roots. It's all very sad, but with hints of a poised beauty within it. Someone seems to have broken the Eel Pie boys' hearts. The last note I have for this song is “sparse, like a provincial high street.” I think that makes sense.

Key lyric- “There's an invisible line between me and you”

This should be the first single, in a sane world. The chorus (“Melt, melt, melt, melt, into you”) is one of those melodic gems that place it in the running as a potential single of 2010 (these things just start earlier and earlier every year). That refrain still goes round my head daily, and I heard it ONCE. One can only imagine the devastation it might wreak on the masses. It has a middle eight, which does that thing of building up guitar and synth noise bigger and bigger until you wait, wait, wait for it to drop straight back into the chorus with a massive bassline and falsetto vocal... which it then kindly does. In short, brilliant.

Key lyric- “You were the apple of my eye / Did you take me for a ride?”

One may have spotted somewhat of a theme in these lyrics. Seems this new record might be something of a 'my lover done gone' affair. Those synths are ever present on these tracks, washed up from some Eighties jumble sale. This is a more of a slowburner than the previous two, but features a few more clichéd lines (see above). It wears its chartseeking patch on its sleeve - those rougher edges of yore have definitely been sanded away. There's some vocal harmonies a la the Beach Boys, and a piano breakdown. It's one to tug on the heartstrings. The last note I have for this is 'drum fills like Tom Cruise just walked in the door.' I think that makes sense.

This doesn't seem to so much be about the lesbian capital of Australia, as much as another girl gone. Perhaps that girl from 'Two Doors Down' didn't work out so well. Of the five tracks, this is the one most like the previous album, with its simpler, more upbeat feel despite of the maudlin lyrics. It is longer, with a slender intro that begets a widescreen epic. Other lyrics include “freedom is an illusion generated by the brain”. We might expect more departures into political philosophy on the record. Or not. Probably just more lyrics about heartbreak.

Key lyric - “Lady Grey, you know how to work me up in the right way / And you're just the kind of mess I'm looking for today”

Finally they've found happiness, in the arms of England's shortest lived monarch. Speculate away as to whether the title is making a parallel with the fleetingness of a romance. Another line asks “Will you still love me in the morning?” The synths and guitars combination is still dominant, with the band's playfulness and sense of fun in full effect. It feels younger, but manages to bring in the dull platitude of “When life gives you lemons / You make lemonade". Poor lines aside, one can imagine it being 'big at the festivals.' This is no criticism.

That "smash hit single" from Twenty One

So, those are the five tracks that are finished from the record. If you went off the band with Twenty One, then don't expect to be won round this time. Their template has developed, and become more nuanced, but it's no great departure. For those who like their pop a little bit Eighties, a little bit heartbroken, then start building your excitement. And there is at least a bit of their old weirdness still in there. One makes no assertion as to the quality of the rest of the record, of course. Expect a single in March, and until then patience, and try to catch them on their supertopsecretshhhhdonttelltherestorelse antics as The Crystal Wolf Fighters, yeah? Yeah.