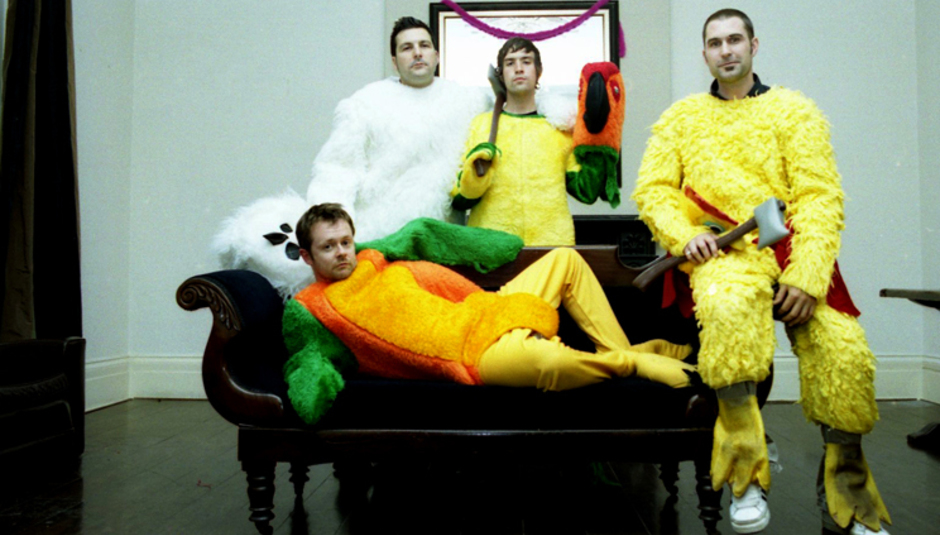 Fake encores, aging fans and spats with lo-fi indie royalty: as caustic country-rockers the Broken Family Band geared up for their last few dates ever, singer Steve Adams told Jess Holland why they decided to call it a day. [NB This interview took place before their final gig, which happened on Halloween.]

DiS: So what happened?

Steve Adams: Oh god. We just always said that we'd quit while we were ahead.

SA: I'm probably not going to talk about it until we've finished the group, not to be dramatic about it. I think I'd go mad if thought too hard about two things at once.

DiS: But you will still be making music?

SA: Yeah, I imagine all of us will. And we've said that we like working together in any kind of combination. I'm being evasive, aren't I? I didn't realise I would be.

DiS: Can you remember your first rehearsal together?

SA: Yes, very clearly. Me and Jay and Gavin all knew each other really well already, and we didn't know Mickey. We were already in our mid-twenties and he was 18 and the thing I remember most clearly was feeling really uncomfortable on his behalf, thinking “you poor bastard, what have you gotten yourself into?”

SA: Bizarrely and kind of perversely our favourite gig that we've done - or at least top five for all of us - was the End of the Road last month, which was really lovely. Hopefully the last few shows will be that great.

Video: Broken Family Band: 'It's All Over'

DiS: You're the only band I've seen do a genuine, reluctant encore. You refused to come back on for ages but no-one would leave.

SA: We used to have a rule about not doing encores, because encores are whack, but we ended up doing them. We used to have loads of rules about things that we would do and wouldn't do and they all fell by the wayside. We played a great gig in Norwich recently, and my response [to people asking for an encore] was to go back on stage and pull my trousers down and show them my arse. I think that was the point where we realised we were going a bit wrong.

DiS: It's nice to see a real encore though! I hate those encores where you know the band are backstage looking at their watch for ten minutes.

SA: Well, we sort of do that now. But we're still really embarrassed about it.

DiS: You've played with some great people, like Herman Dune.

SA: Yeah, we used to play with them a lot

DiS: Did you ever collaborate with them?

SA: I don't think they ever really liked our music to be honest. And it was only really me that liked their music, but their drummer played with us once. We had a lovely time with Herman Dune once in Nottingham. We were going off bowling, and we bumped into Andre, and we were like “Andre, we're going bowling” and he said “okay, I'll come with you,” in his French accent. We were walking down the road and chatting and about two minutes later he just turned down another street and went “okay, see you later, bye bye”, and that was the end of Andre going bowling with us. I think they went off us in the end. We always had more money than they did.

DiS: Your last ever gig is at the Portland Arms in Cambridge. Is that going to be the special one?

SA: Yeah, we're always best playing to smallish audiences. We've got quite simple songs that we play quite simply and we try and make sure that everyone feels like they're with us having a nice time. And the Portland feels very much like home.

DiS: It's a tiny venue, how fast did it sell out?

SA: Well, it was application-only. I was in charge of vetting the applications. They had to write 30 words or less about why the fuck we should spend our last party with them.

SA: It was amazing, I think I only did it to get the outpouring of love. Although it was sort of depressing the number of people who said “please let us come because we've got children now and we don't get out very much”. You think, “this is why we need to get out of playing in this band, because none of the kids are into it.”

In Photos: The Wave Pictures @ The Ga...