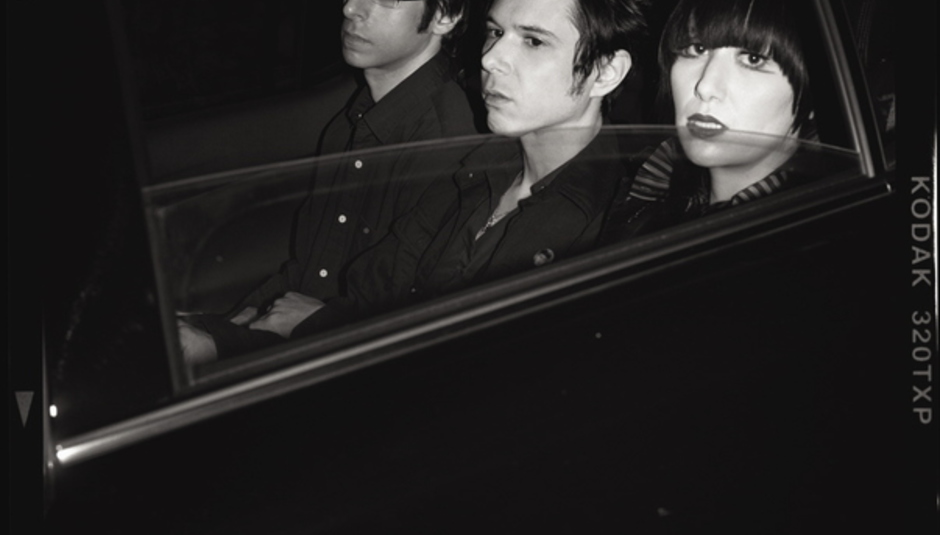 The Science Of Fun: DiS meets the Yeah Yeah Yeahs

The Science Of Fun: DiS meets the Yeah Yeah Yeahs

In case that lovely dropdown advert passed you by, the cover of Yeah Yeah Yeahs' third album It’s Blitz! comes adorned with a picture of singer Karen O’s hand crushing an egg, the one-time potential chicken detonating across shot in an oddly sci-fi looking burst of yolk and shell. It was not an easy shot to get.

“Oh, we broke a lot of eggs,” chuckles Karen. “And yeah, it was mostly me. Nick tried to do a few but he was all like [mimes effete, dandyish attempt]. There’s a whole bunch of photos, it’d be cool to put them all up on a wall somewhere. Most of them looked like UFOs, but there was a beautiful one that looked like a heart.”

Is there a secret to blowing up an egg?

“There is! But you should find out for yourself. Seriously, we had to break a lot of eggs.”

Nick Zinner looks and dresses like Nick Zinner. Which admittedly is less hard than for Karen, but still... He’s small, quite distant, and seems the least happy to be here. He also takes a photo of DiS when he thinks I’m not looking.

Which is just as it should be, really. For a band that’s blindsided us several times in terms of musical style – the berserk, horny no wave of their debut EP, the maturation of ‘Maps’, the bone-rattling impact of Is Is, the electro-pop swerve of Zero - they've remained very consistent in other respects. Not just as individuals, though the dress sense, haircuts, and stage antics have remained virtually unchanged. But their stature as a band has been remarkably constant since Fever To Tell came out six years ago: near-identical levels of critical and audience acclaim, similar chart positions, still playing broadly the same venues (even if they are selling them out in ten minutes and are sure to cause some brutal queues at the Camden Crawl on Friday).

And with It’s Blitz! they even seem to have resurrected the old frivolity that coursed through songs like ‘Bang’ and ‘Art Star’ and fell by the wayside a little with Show Your Bones. Which is interesting: those old songs emerged from the rattle and scuzz of a jobbing New York band. The new ones grew out of painstaking studio sessions in a quiet, snowy New England barn-conversion. Does it feel the same, at all?

“I mean in the beginning it really was just fun,” considers Karen, “but I think later on you have to be like ‘we’ve really gotta make this more fun', ‘how can we make this more on the fun side?’ ‘Coz it’s serious work, generally, and I suppose it doesn’t come like a lightning bolt out of the blue. I mean a couple of things did on this record, but the rest of it is... after being in a band for a while you do have to make conscious decisions about making things more fun...”

Is there a science to fun?

“Definitely. In the beginning it’s a given, but later on I guess it's more of a science.”

‘Heads Will Roll’ would perhaps seem the case in point: all keyboard pulse and mirrorball flourishes, with a lyric evoking the savagery and release of losing oneself on the dancefloor, dance songs about dancing tend to be pre-conceived.

“Yeah,” nods Karen, “that was one of the last songs we wrote for the record... basically I just had that mantra in my head 'off, off with your head, dance ‘til you’re dead, heads will roll' and uh, yeah, so I just thought yeah, it'd be fun to make a more dance song out of it, you know? But it was later on when we made it, we needed a few more straight-forward songs on the record, so I kind of figured that if we were gonna make it straight forward, then it'd be good to make a dance song that would be kind of self-conscious in a kind of brutal way.”

Do you still go dancing? By now it is probably about time to talk about the Yeah Yeah Yeahs’ ‘new electronic direction’ as, um, that’s what everybody else is going on about. Nick brought an old Arp synthesiser along to the first album sessions without even really being sure if he was going to use it, but ultimately it led to one of the more acclaimed guitarists of his generation largely ditching his usual instrument in favour of pastures electronic.

“How did it happen?” asks Nick, rhetorically. He ponders for a second. Then shrugs. “You know, I don’t really think of myself as ‘the guitarist’, I just help make music for the band, we all contribute ideas, it’s just like a new toy that was different, fun to play around with.”

The thing is – and the band are quick to agree – It’s Blitz! isn’t as radical a shift as has been made out in many quarters. It starts with two full-on electro-pop belters (‘Zero’ and ‘Heads Will Roll’), and then for the most part drifts into the type of radiant ballad territory that they’ve proven themselves so adept at since ‘Maps’. Dave Sitek and Nick Launay both return to produce. Even when they break cover with the aggressive ‘Shame And Fortune’ and ‘Dull Life’, it’s noticeable that those songs have, um, lots of guitars on them. And besides, Zinner isn’t Angus Young, he’s always been very much about eerie harmonics over juggernaut riffs.

Nick looks on and nods. A bit.

What it all comes back to is consistency. ‘Maps’ saw the Yeah Yeah Yeahs hit a sort of timeless note that they’ve been able to return to time and time again, a solid core of emotive, slow tempo, musically interesting, almost genre-transcendent songs that provide a platform from which they can launch the attention-grabbing but still immaculately-crafted curveballs like ‘Zero’ and ‘Kiss Kiss’. They have an unquestionable knack for giving people what they want, especially live. But they work damn hard at it all, be it spending a day crushing eggs, or a week agonising over how to make a song two per cent more fun. Combined with their obvious magnetism as individuals and a general avoidance of anything that might constitute selling out (almost maddeningly so – at the very least they could play a few larger venues), and you have a band that seems almost immune from the vagaries of fans and the music press, living in a charmed bubble between cult and mainstream where everybody loves them.

It’s not really something that carries too well when you put it to them; suggest they’ve had a good run of it and they look back with apologetic smiles.

“We just don’t think about that stuff, sorry,” says Brian.

Ask if they feel any pressure to live up to the anarcho-cool image that’s sustained them so well though their career – whether, say, Karen feels she could ever dress down for a gig, if they feel like an older band - a you do get a slightly better response.

“You know, it was only recently that I really started thinking ‘this band is what I do’,” she muses. “I guess I kind of behave the same on stage and things, but you know, just because ‘Zero’ is a pop song I’m not going to come out with, like, choreographed moves or a fucking head microphone [gets up and does a Madonna-like strut]. I’m not a pop... you know? I’m hoping that sort of the reason why it’s always come out how it does onstage is a love of performing and a love of playing with these guys and a love of using that as my platform for all the repressed emotions I feel. But as far as conforming to expectations like ‘is she going to pour beer over her head?’ then no, I don't feel I have to do that. Thankfully.”

In Photos: Rolo Tomassi and Grammatic...